To what extent can US aid help Iraq’s minorities?

US financial aid to Iraqi religious minorities in the Ninevah Plains brings them hope and raises their expectations about the future of their homeland in northern Iraq. 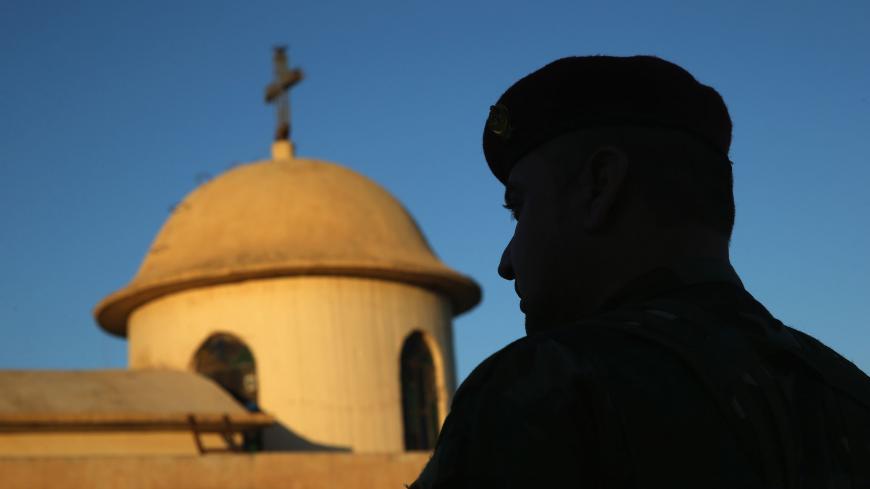 A Christian militiaman stands atop St. George's Church in Telskuf, near the front line with the Islamic State in northern Iraq, Nov. 4, 2015. - John Moore/Getty Images,)

BAGHDAD — Iraqi minorities have warmly welcomed the Oct. 16 announcement by the US State Department that it would be providing $178 million in additional aid for ethnic and religious minorities in Iraq.

Murad Ismael, the executive director of Yazda, a global Yazidi organization, wrote on his Facebook page, “Thank you, America, because you are the mother of persecuted minorities. … The United States today stands with the Yazidi people … this is not something new for America, but the Yazidis really appreciate this stand.”

Mona Yako, an expert focusing on the protection of minorities in the Kurdistan Region of Iraq, welcomed the size and timing of the US aid. She also stressed to Al-Monitor that such aid must be disbursed fairly, be based on priorities and be free of corruption.

Yako said that Christians in the Ninevah Plains were widely disappointed when the region was taken over by the Islamic State (IS).

In this context, she stressed the need to allocate part of the aid for the building of a united minority force capable of defending areas inhabited by minorities. Such a force, Yako said, should work under the umbrella of the Iraqi armed forces and the official security services, especially considering that this is a legitimate and constitutional right for every Iraqi component under Article 9 of the Iraqi Constitution.

Yako said that after security, the economy is the second pillar that any minority requires in order to survive, and the offered funds would be best used by reviving the economy of the region and establishing attractive projects for all groups, including women and the elderly. Confidence must be restored between citizens and the state, she added, so that citizens feel their dignity is safeguarded within the borders of Iraq and consequently refrain from migrating.

Yako further said that youths should be taken into consideration and that they are the groups that must be discouraged from emigrating from the country.

She also pointed to the need to distribute the funds fairly while compensating the victims and informing minorities that their rights will not be lost and that justice will prevail, all of which would help residents of the Ninevah Plains return to normal life.

Saad Babir, an activist in Yazidi affairs and a media official with Yazda, also supported the idea of establishing a security force made of minorities. He said such a force should be trained by coalition forces in their areas under the supervision of Iraq’s security ministries.

Babir believes that the establishment of military bases for coalition forces in minority areas will significantly build confidence within these vulnerable groups, which lack protection.

Asked whether assistance should be directed to Sinjar, which is the stronghold of the Yazidis, Babir proposed a plan aimed at opening colleges, institutes, hospitals and government departments such as passport and citizenship departments in minority areas. This, he said, would prevent minorities from going to cities such as Mosul, Tal Afar and Baghdad, among others. Many Yazidis are targeted in these areas based on their religious affiliation.

“Providing economic independence to minorities and alienating them from the dominance of political parties is extremely important in order to put an end to the political exploitation of minorities, which has led to the confiscation of their rights, deprived them of their freedoms and even posed a threat to their religious and cultural affiliation,” Babir stated.

While the US aid includes a strong message of support for religious minorities in liberated areas such as Sinjar and the Ninevah Plains, it also led representatives of some Iraqi minorities who are either excluded or neglected by the US government to raise questions.

No allocations have been reserved for Mandaeans and other non-Christian and non-Yazidi ethnic minorities.

Nadia Fadel Meghames, director of the Sabean Mandaean Endowment in Iraq, told Al-Monitor, “The Ninevah Plains and Sinjar have suffered major destruction, ethnic cleansing and destruction on the part of IS. This is probably why American politicians may prioritize such areas in order to encourage the return of Christians and Yazidis to such areas."

Meghames added, "However, this does not negate the fact that at least a part of the aid should be kept for the Mandaean minority, which is a millennial culture that is threatened with extinction and lacks the minimum needs required to face waves of migration. Such needs include places of worship where they can perform their rituals and preserve their heritage, culture and language.”

Imad Abdel Latif, an economic expert, believes that Iraq does not need such assistance. He said the Iraqi government should have such funds to support minorities. Iraq, he said, is a country that has all the material and human resources necessary to promote citizenship in a multiethnic society.

He called for the creation of the necessary political will in order to efficiently manage the economic resources of the country.

In this context, Latif said that minorities “should be given priority because they urgently need to rehabilitate the [multidimensional] destruction they suffered from due to the lack of fair and wise distribution of resources.”

He added that dedicating such international assistance to the development of economic empowerment policies for minority members will be useful in the long run. Allowing minorities who, according to him, are the most important economic resource to be citizens with full rights will turn them into a scarce productive component and an everlasting economic resource. Not only will this benefit minorities alone but also all of Iraq’s minorities.