On the anniversary of the start of Iraq's massive protests, Iraqis are preparing for a new wave of demonstrations in Baghdad and other cities. 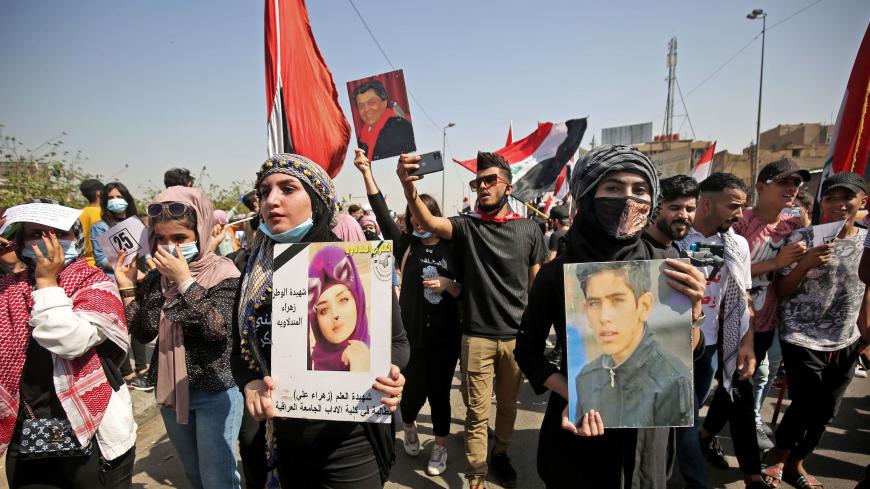 Iraqi demonstrators carry the portraits of slain protesters during a demonstration in Tahrir Square in the center of Iraq's capital Baghdad on Oct. 1, 2020, commemorating the first anniversary of the massive anti-government protest movement over unemployment, poor public services and endemic corruption. - AHMAD AL-RUBAYE/AFP via Getty Images

BAGHDAD — In a heartbreaking scene, long lines of protesters marched in Baghdad’s Tahrir Square holding photos of more than 600 people who were killed in the last year of protests in the capital and other provinces in the south.

Since last week, protesters have been decorating the squares where they have been gathering. In Tahrir, in the heart of Baghdad, dozens of artists are painting new murals and hundreds of demonstrators are cleaning the streets and reorganizing the tents.

Last night, scores of tuktuks, the small vehicles that have become part of the fabric of the protests, paraded in Tahrir Square, proclaiming the uprising will continue until its demands are met.

A year ago, on Oct. 1, 2019, the demonstrations began with Iraqis demanding a "homeland," an end to foreign interference and corruption and the provision of basic services. The demonstrations soon turned into a popular uprising from Baghdad to Basra in the far south of Iraq, including the influential Shiite city of Nasiriyah. It has spread to 10 Iraqi governorates, where the main squares have become the sites of sit-ins and covered in tents.

The uprising became a milestone in the post-2003 political process and an icon for a new non-sectarian Iraqi national movement, bringing together the full spectrum of society and uniting its demands under one umbrella.

The government of Prime Minister Adel Abdul Mahdi resigned in November 2019 and in May, a new government was formed under former director of the National Intelligence Service Mustafa al-Kadhimi. The new government set the date for early elections as next June. However, no other demands have been addressed yet. The electoral law has not been finalized and other requirements for early elections including an electoral commission and a federal court in charge of overseeing the vote have not been agreed upon.

More importantly, the militias involved in killing and injuring thousands of protesters have not been held responsible for their crimes. Hundreds of activists remain missing and presumed abducted. Iraq's security crisis is worsening as attacks on foreign missions and troops increase, and the US threat to close its embassy has added fuel to the fire.

The prime minister meets with protesters and civil society leaders regularly and promises to meet their demands, but multiple challenges and pressure from various directions remain in the way. He has also urged groups of protesters to join a political party that supports him serving a second term.

The Turkish Restaurant, as the main headquarters of the protesters gathered in Tahrir Square, has become a symbol of the protests.

The prime minister launched a project Oct. 1 to turn the Turkish Restaurant into a cultural center memorializing the protests. It will include libraries, museums, theatres and other cultural facilities. It will feature a massive Iraqi flag and two waterfalls representing Iraq's two famous rivers. Kadhimi has named it the Tashrin (October) Edifice and put his adviser for reconstruction and infrastructure, Sabah Mushatat, in charge of the project.

Mushatat told Al-Monitor the memorial "will become a symbol of protests, inspiring people to seek justice and democracy.” He said that another memorial will built in Nasiriyah, the second hardest-hit city after Baghdad with at least 120 protesters killed and thousands wounded.

“We are now in the stage of drawing up plans and site arrangements for the two projects. After that, the [construction] company will be selected,” Mushatat said.

Iraq's southern cities are now busy with the religious march of Arbain toward Karbala and protest organizers are preparing for the new wave of demonstrations on Oct. 25. Massive turnout is expected, but the protests will face ever more serious security, economic and health challenges.