Iran has seen the rial’s value fall by almost half this year as the currency now stands at a record low against the US dollar, triggered by ongoing sanctions, coronavirus restrictions and, according to some experts, Iran's foreign policy adventures since the 1979 revolution. 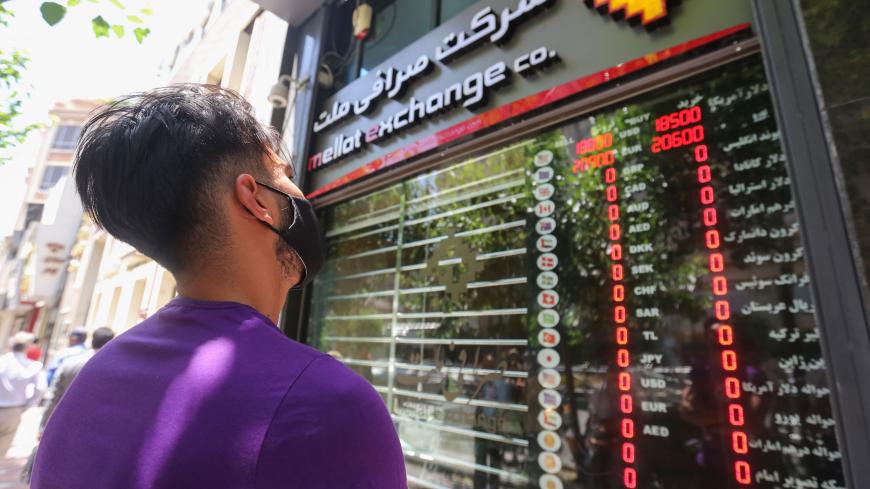 An Iranian wearing a protective mask due to the COVID-19 pandemic checks the currency exchange rates in Tehran on June 22, 2020. - ATTA KENARE/AFP via Getty Images

Iran’s currency dropped to its lowest value ever against the US dollar last week amid crushing sanctions by Washington, a disastrous response to the coronavirus pandemic and a string of disjointed foreign policy efforts that have caused distrust in the regime and caused money to flee the country.

The rial's value has fallen almost in half this year, and 30% in the last three months alone. A portion of the drop is due to a major slump in oil prices and a downturn in the global economy triggered by the coronavirus pandemic.

Even before the pandemic, domestic consumption was the only thing going for the regime economically as heavy international sanctions were already hurting the country, said Alex Vatanka, the director of the Middle East Institute’s Iran Program. But the pandemic spiraled the situation into disaster.

“They didn’t have a fallback position and that meant they had to keep their local economy going,” he said. “That’s why they were so reluctant to close down business and to tell people to stay home, the usual things that a lot of countries decided to do.”

The rial's loss of value is partly a product of sanctions against the regime that were triggered by US President Donald Trump’s decision in 2018 to withdraw from the Iran nuclear deal. Among some of the harshest US sanctions are restrictions on Iran’s oil exports, the country’s main source of income.

Although some Iranian leaders will use the collapse of the nuclear deal as a scapegoat for the regime’s economic woes and Washington in turn will say its sanctions caused the rial’s downfall, foreign policy experts cite disjointed international efforts by Iran’s leadership that have crippled the country's economy since the 1979 revolution.

“Oftentimes people want to boil this down to the nuclear program, but it’s much bigger than the program,” Vatanka said. “Nobody wants to talk about the elephant in the room, that this crisis is fundamentally not an economic crisis but a crisis about choice of foreign policy. It’s not about Trump. It goes back to 1979. It’s the crisis of what kind of foreign policy do you want to have, a revolutionary foreign policy or do you want to be a normal state? [Iranian Supreme Leader Ali] Khamenei doesn’t want to choose.”

Traders have blamed the sanctions for sparking a failure in returning export earnings. To combat the loss, last month the regime pledged to invest 1% of its sovereign wealth fund, the National Development Fund, to shore up its market. And Iranian officials have warned exporters to return their foreign earnings home from abroad or face having their licenses revoked. The central bank agreed to publish the names of violators.

Now Iranians fear a seeming bubble in the Tehran Stock Exchange and the currency's loss of value will lead to a big crash and a major loss of individual savings. This is contributing to a flood of investment outside the country, in particular involving the purchase of properties in places such as Turkey. Such capital flight became so bad that Khamenei made a statement against it.

But what Iran’s supreme leader did not say may be more important.

“What Khamenei should have mentioned is this lack of trust in the state and the ability of the government to protect the investor’s money at home,” Vatanka said. “He didn’t mention that foreign policy is at the heart of everything that" concerns the average Iranian.