No more UN embargo on Iran, but no arms sales either

Anyone who might seek to sell arms to Iran is likely in a holding pattern to see what happens in the US election and to see what Iran, in dire economic straits, can afford. 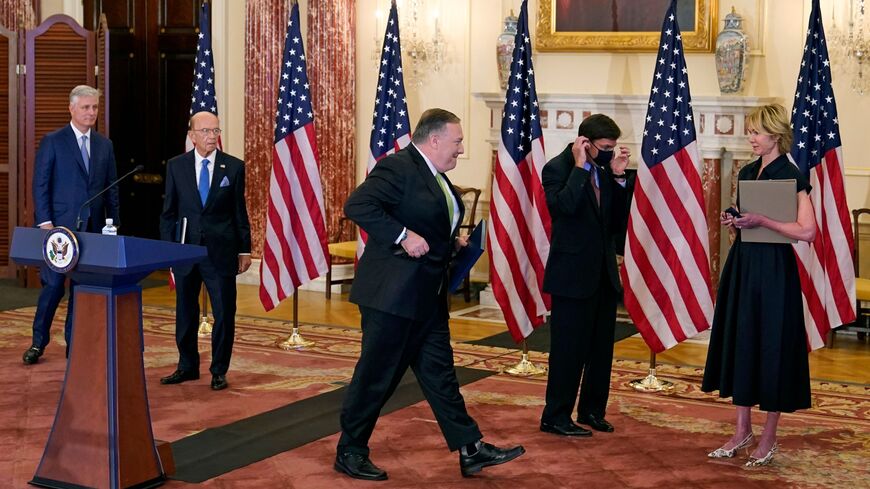 US Secretary of State Mike Pompeo (C) leaves a news conference that announced the Trump administration's restoration of sanctions on Iran, on Sept. 21, 2020, at the US State Department in Washington. Departing with Pompeo are (L-R), national security adviser Robert O'Brien, Commerce Secretary Wilbur Ross, Defense Secretary Mark Esper and US Ambassador to the United Nations Kelly Craft. - PATRICK SEMANSKY/POOL/AFP via Getty Images

For all the to-and-fro over the expiration of the UN arms embargo on Iran on Oct. 18, little has changed in practice. Although the United States lost big in its effort to extend the ban, no major arms dealer will risk American sanctions for the sake of Iran’s market, limited as it is by the state’s economic troubles. Tempting massive fines from the US Treasury would be especially foolhardy at this time, when a possible shift in US politics may soon change the sanctions landscape. So while the Trump administration is correct, in a purely practical sense, that Iran arms sales remain prohibited, this may not be for long.

In a legal sense, of course, the UN ban on certain conventional arms sales to Iran that was first imposed in 2007 has now been removed, in line with the five-year timetable of the 2015 Iran nuclear deal, known as the Joint Comprehensive Plan of Action (JCPOA). US insistence otherwise is laughable. The Trump administration first defied all common sense by claiming rights under the Iran nuclear deal from which it withdrew two years ago in order to try to invoke snapback sanctions. Then, in a further ludicrous twist of logic, the Trump team says it must uphold UN sanctions that no other member of the Security Council save for the Dominican Republic believes to be in place. If the nations of the United Nations themselves say there is no UN embargo, then there is no UN embargo.

What remains in place are unilateral US sanctions. In vowing to enforce its view that UN sanctions remain in place, the United States did not adopt any new rules. It already has the power to apply extraterritorial penalties on any entity that challenges the myriad of measures put in place over the past three years to stifle Iran’s economy. To underscore this point, Secretary of State Mike Pompeo on Oct. 18 threatened to penalize “any individual or entity that materially contributes to the supply, sale, or transfer of conventional arms to or from Iran.” But foreign arms sellers already knew this; his remarks were for a domestic audience. Ditto President Donald Trump’s profane machoism in an Oct. 9 interview with radio talk-show host Rush Limbaugh.

When it comes to Iran, Pompeo has been very outspoken. In an interview with Newsmax TV on Oct. 9, he claimed that Iran was not only the “greatest threat” to Middle East peace, but also “the greatest threat, frankly, to Americans all across this great country.”

Speaking to the UN Security Council on June 30, Pompeo warned of ominous Iranian threats on air, sea and land, including, oddly, to countries such as India and Poland. He said, “If you fail to act, Iran will be free to purchase Russian-made fighter jets that can strike up to a 3,000-kilometer radius, putting cities like Riyadh, New Delhi, Rome and Warsaw in Iranian crosshairs.

“Iran will be free to upgrade and expand its fleet of submarines to further threaten international shipping and freedom of navigation in the Strait of Hormuz, the Persian Gulf and the Arabian Sea. Iran will be free to purchase new and advanced technologies for its proxies and partners throughout the Middle East.”

To paint the supposed threat graphically, Pompeo then tweeted a map of Iran’s potential airstrike radius if it bought advanced Russian fighter jets. He forgot, however, that the advertised ranges are one-way, neglecting that lacking air-refueling capacity, Iranian pilots would have to conserve enough fuel to fly home.

In any case, Iran has no hard money to buy such an advanced fighter, one squadron of which can cost up to $2 billion. And Russia has shown no interest in transferring systems that could upset the military balance of power in the region. Russian Ambassador to Iran Laurent Jagarian did discuss the possibility of selling the S-400 advanced air defense system. Contrary to popular belief, air defense systems were never covered by the UN sanctions resolutions.

Yet any negotiations over such a sale would likely take many years, given the tortuous record of the last air defense system Russia sold to Iran. Iran sought to procure Russia’s S-300 system beginning at least in 1998, but it took nine years to sign the deal and another nine years for the system to actually be delivered.

In addition to fighter aircraft and improved air defense, Iran would like to fill other capability gaps with military systems it cannot produce domestically, including surface-to-surface missiles, tanks, advanced mines and anti-ship cruise missiles. These were the conclusions of a thorough study by the International Institute for Strategic Studies in 2017. In light of the high cost of procurement, however, priority will be given to weapons deals that include licensed- or co-production rights. Such aspirations remain in the future tense, however, given the power of US sanctions and the weakness of Iran’s economy.

For the time being, Iran will likely continue to emphasize the development of ballistic missiles, which remain under UN sanctions until October 2023 (unless the International Atomic Energy Agency before then assesses that Iran’s nuclear program is totally peaceful). These sanctions have not stopped Iran from expanding its missile systems and improving their accuracy.

Nor have ongoing UN sanctions prevented Iran from transferring arms to regional states and nonstate actors. While the blanket UN ban on arms exports from Iran is now lifted, separate UN resolutions continue, ineffectively, to prohibit Iranian arms sales to Yemen, Lebanon and Syria. Here, too, little will change. Countries such as Venezuela and some in Africa may look to Iran for bargain-price drones and munitions, but the United States and its maritime partners will try to interdict any major weapons transfers.

All of which goes to say that there is time to assess and address potential arms sales to Iran that could pose problems for regional stability. The next US administration should take up the matter carefully and in concert with allies. Sanctions, both multilateral and unilateral, will continue to have a place in US policy, but they are not the only available foreign policy tools. Coercive measures must be complemented by incentives and bargains best reached via multilateral diplomacy. To be most effective, the United States will have to show that deals made will be deals kept.