The quiet visit came less than a week after the defense secretary said the United States would like to see regional security cooperation with Israel to deter Iran. 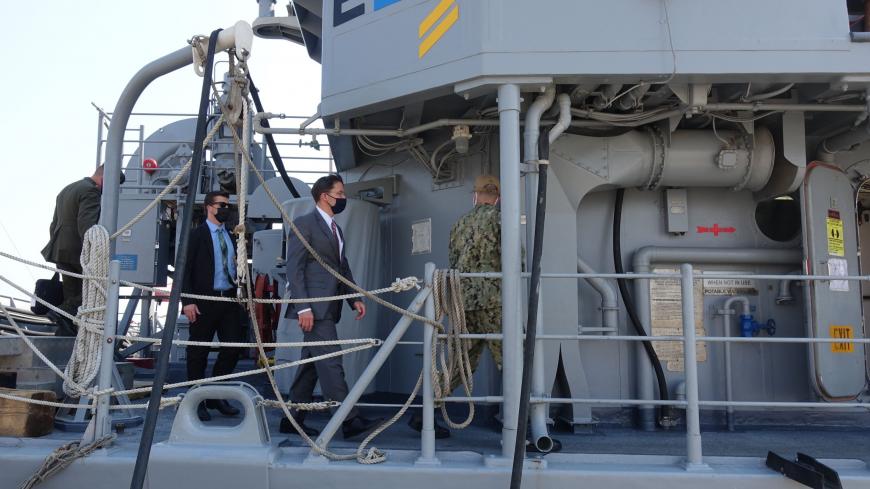 US Defense Secretary Mark Esper (2L) is pictured on Oct. 28, 2020, aboard the USS Devastator minesweeper while on a visit to the Naval Forces Central Command base in the Gulf kingdom of Bahrain. - PAUL HANDLEY/AFP via Getty Images

US Defense Secretary Mark Esper quietly met with the leaders of Israel and Bahrain this week amid a Trump administration push for the Abraham Accords to prop up regional cooperation to counter Iran.

The stopovers came amid Esper’s return from South Asia, where he and Secretary of State Mike Pompeo met with India’s Prime Minister Narendra Modi.

The Pentagon did not announce Esper’s visits to the Middle East until he had already departed.

The US defense chief met with Bahrain’s King Hamad bin Isa Al Khalifa in Manama as well as the commander of the US Navy’s 5th Fleet, Vice Adm. Samuel Paparo.

A Pentagon press release said Esper “got a feel for operations in the Persian Gulf” and the threat Iran could pose to the area.

“Iran has seemed to back off from provocations,” the press release said. Last year the United States accused Iran of sabotaging Gulf oil tanker shipments with limpet mines and launching drones and cruise missiles against Saudi Arabian oil facilities in response to Washington’s “maximum pressure” campaign to isolate Tehran economically.

On Thursday, the Trump administration notified Congress of its proposal to sell the United Arab Emirates the highly advanced F-35.

Details of last week’s agreement with Gantz were not publicly announced, but Esper’s latest trip to the region was kept unusually quiet by the Pentagon.

NBC reported Thursday that senior Pentagon officials have received briefings on a potential active threat on US military officials involved in the assassination of Iranian Maj. Gen. Qasem Soleimani in January.

The warnings came after an Iranian national followed a senior Pentagon official in a car last month, but the FBI concluded it was not clear whether the driver had any direct connection to Iran or its government’s promise to retaliate for the Soleimani assassination.

It is not clear if the threat warning was a cause for the secrecy surrounding the US defense secretary’s trip.