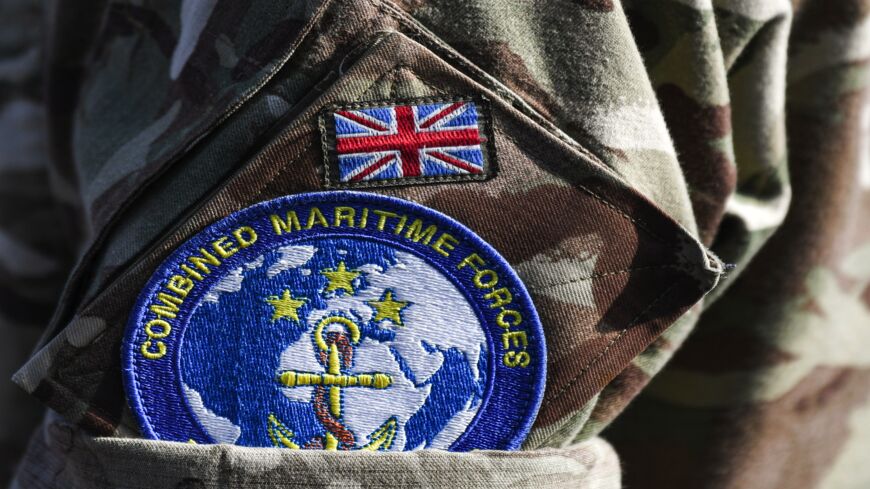 This picture taken on Nov. 5, 2019, during the International Maritime Exercise (IMX) in the Gulf waters off Bahrain shows a close-up of the badge of the Combined Maritime Forces (CMF) multinational naval partnership worn on the uniform of a British serviceman. - KARIM SAHIB/AFP via Getty Images

Egypt became the 34th member of the US-led Combined Maritime Forces (CMF) on Wednesday, marking the latest regional contribution to the multinational security and counterterrorism coalition.

“Egypt is an important partner in ensuring stability in the region, and we are honored to welcome Egypt’s partnership in our mission focused on making the region and world a safer place,” said Paparo, who also commands the CMF and US Central Command’s (CENTCOM) naval forces.

Though neither side specified what specific support Egypt would offer to the force, Khaled praised the opportunity for new cooperation on joint maritime security operations, cybersecurity and training.

“Egypt brings a wealth of operational experience in the region and maritime capabilities to the CMF, and now provides coalition partners on both sides of the Red Sea a waterway of significant strategic importance accounting for 10% of the world’s trade,” said Paparo.

“Egypt’s membership will improve mutual awareness and ability to operate in the central and northern Red Sea,” Paparo said.

The US Navy organized the CMF after the Sept. 11, 2001, terrorist attacks to secure major waterways around the Suez Canal and the Strait of Hormuz, two key chokepoints on the global economy that lie at the center of the Middle East.

The force consists of three multinational task forces. Task Force 150 is currently led by Canada and focuses on counterterrorism and counter-smuggling operations in the Red Sea, Indian Ocean, Gulf of Oman and Gulf of Aden.

Task Force 151, under the command of Pakistan’s navy since December, was established by the United States in 2009 to counter piracy in the region. Task Force 152 operates inside the Arabian Gulf and is largely to secure the waterway for oil shipments. It is currently headed by Saudi Arabia’s Border Guard.

Egypt’s participation in the CMF comes after Russia secured its first naval base on the Red Sea last year at Port Sudan. The United States has also hastened to establish close ties with Sudan’s armed forces after removing Khartoum from the State Department’s state sponsors of terrorism list last year.

Russia has sought to expand its military reach in the Middle East and Africa, using basing in Syria as a springboard for intervention elsewhere.

The Pentagon is seeking to economize its role in the Persian Gulf region as the Biden administration seeks to send forces to the Indo-Pacific to counter China’s rising military.

CENTCOM under Gen. Kenneth “Frank” McKenzie has advocated expanding local countries’ capabilities to compensate for future reduction of US forces in the region.

Meanwhile, CENTCOM put on a show of force in the region in recent months to deter Iran and its proxy militias from launching attacks on US troops and allies — with mixed results — as the State Department seeks a deal with Tehran to limit its nuclear program.

The French carrier’s mandate includes “de-escalation with Iran” and “freedom of navigation, with an eye on the proliferation of [nuclear, radiological, biological and chemical] weapons and the increasing drones and missile threats,” Breaking Defense reported.