Egypt took charge of Combined Task Force 153 on Monday as the Pentagon seeks to economize its footprint in the Middle East. 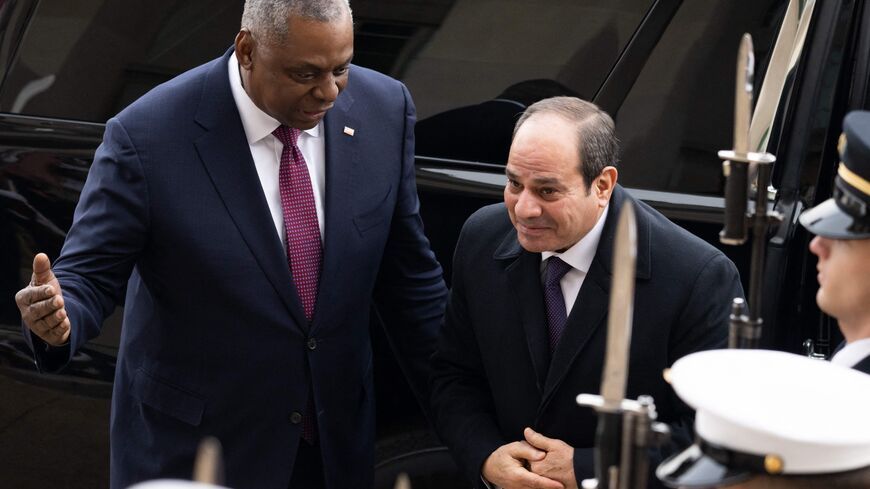 Egypt’s President Abdel Fattah el-Sisi was cordially received in Washington this week, where he met with US defense chief Lloyd Austin after attending separate discussions with top US diplomat Antony Blinken and a handful of House lawmakers earlier on Wednesday.

Sisi also met with President Biden on the sidelines of the summit on Thursday. This was the Egyptian leader's first visit to Washington since Biden came to office in 2021.

He joined more than 40 African leaders who convened in the US capital this week to hear how the Biden administration plans to help them secure their countries' futures on a global stage, but only Sisi received an audience at the Pentagon.

“The administration greatly appreciates Egypt’s leadership and cooperation in achieving our shared security objectives,” Austin said before the cameras ahead of their meeting on Wednesday.

The Pentagon chief praised Egypt’s example as the first Arab country to normalize ties with Israel, lauding Cairo’s “responsible stewardship of the Suez Canal” and “the vital assistance that Egypt provided in securing the ceasefire in Israel and Gaza this past August.”

“We remain committed to ensuring that Egypt has the capabilities to defend its people and its territory,” Austin said, continuing, “So we will continue to work with Egypt and your neighbors to strengthen interoperability, integrated air and missile defense and maritime security.”

Why it matters: Sisi’s warm reception across the Potomac comes just two days after the Egyptian Navy assumed command of a new maritime task force set up by the US’ Fifth Fleet in April.

The US stood up Task Force 153 under the Combined Maritime Forces (CMF) to patrol the Red Sea and waters off Yemen as the Navy continues to economize its presence in the Middle East, even as it boosts surveillance of its adversaries' activities and interdictions of arms and drugs.

That means a greater role for regional militaries, according to the Pentagon’s plans, and Egypt is well-situated to assist. The Egyptian navy — the largest in the Middle East — joined the CMF last year even as leaders in Cairo have been cautious not to be seen as part of a US-led regional bloc against Iran.

“It is a true honor to hand over command to an incredibly strong regional maritime partner like Egypt,” US Navy Capt. Robert Francis said before passing the torch to Rear Adm. Mahomud Abdelsattar at CMF headquarters in Bahrain on Monday.

However hands-on their role, Abdelsattar’s forces are now in charge of multinational patrols in waterways that are rife with smugglers trafficking Iranian arms to Yemen’s Houthi rebels and geographically overlooked by the China’s only foreign military base abroad.

The bigger picture: The Biden administration is relying on the Pentagon’s relationship with Sisi — who served as Egypt’s defense chief before seizing power in a July 2013 coup — to pull him closer into the fold following pushback from lawmakers, most of them Democrats, in Congress over his government’s widespread and continued human rights abuses.

The administration had all but cleared Egypt's years-long request to purchase F-15 fighter jets from the US earlier this year after Cairo reportedly nixed plans to obtain Russian Su-35s, and for the past two years has withheld less than half of the annual aid to Egypt conditioned by Congress on tangible human rights progress – moves which rights groups have described as enabling.

Amnesty International reported in September that Egypt’s National Human Rights Strategy, rolled out last year in response to US and international pressure, has been little more than a “cover-up” for “unrelenting” abuses by security forces since.

In his meeting with Sisi on Wednesday, Blinken reiterated the administration's "commitment to the US-Egypt strategic partnership," discussed "Egypt's important role in promoting stability in the region" and lauded "decades-long bilateral defense ties" between Washington and Cairo.

He also "recognized Egypt's recent releases of political detainees and encouraged further progress to advance human rights and fundamental freedoms," according to a State Department readout. Egypt is one of the world's largest jailers of journalists according to Reporters Without Borders, with at least 28 detained on arbitrary charges.

Austin, who previously commanded all US forces in the Middle East from March 2013 through the Obama administration's thaw with Sisi's regime two years later, spoke highly on Wednesday of Egypt’s hosting of the UN’s COP27 global climate summit last month and its role in securing a ceasefire between Israel and Palestinian Islamic Jihad militants in Gaza in August.

The two former generals also “discussed the wide range of threats posed by Iran, including its provision of unmanned aerial systems to Russia which have been used to attack civilians and civilian infrastructure in Ukraine,” according to a statement released by the Pentagon following the meeting.

The US defense chief "also reinforced respect for fundamental freedoms and the importance of human rights as imperative for security and stability."

What’s next: The Fifth Fleet is looking to expand both the CMF, which now consists of 34 member nations, and the International Maritime Security Construct (IMSC), set up in 2019 to protect maritime shipping from attacks by Iran.

Footprint in Africa: The US defense chief emphasized on Tuesday that he was in listening mode with African leaders.

“We want to understand what’s really important to you," Austin said alongside Blinken and USAID chief Samantha Power. "And going further, we want to make sure that we are doing the things to develop and empower your forces and help you work on your security architecture in ways that you think will benefit you – in ways that will promote regional stability.”

Separately on Tuesday, Austin met one-on-one with the President João Lourenço of Angola and “expressed appreciation” for his country’s “increasing security cooperation with the United States.” Angola's leadership reached out to US Africa Command earlier this year seeking greater military ties with the US.

Austin also met with and expressed appreciation to the presidents of Djibouti, Niger and Somalia, countries which continue to host US special operations forces in counterterrorism missions.