Cairo has executed another 15 political detainees whose families are accusing the state of torture and refusing to hand over the bodies. 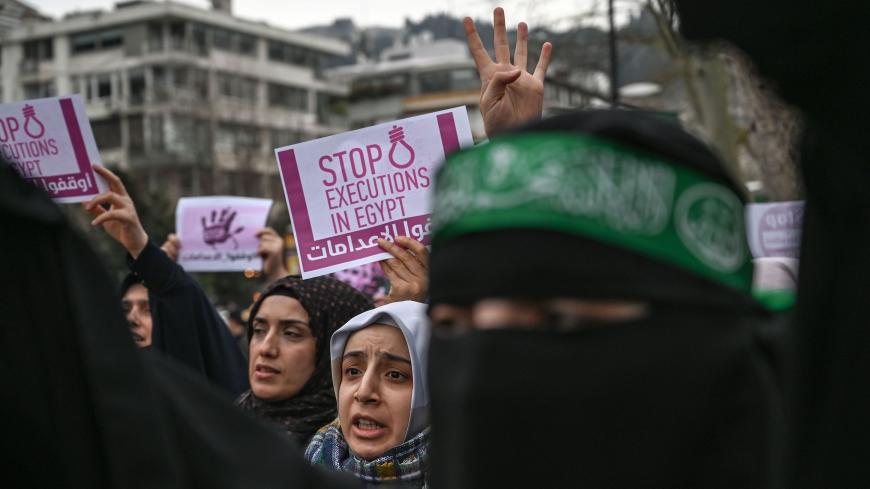 People hold signs reading "Stop executions in Egypt" in front of the Egyptian Consulate in Istanbul on March 2, 2019, during a demonstration against the death penalty in Egypt after the recent execution of nine men. - OZAN KOSE/AFP via Getty Images

A correspondent in Egypt
October 8, 2020

CAIRO — Rights groups are alarmed about the execution of political detainees in Egypt.

According to We Record, 13 of the 15 detainees who were executed were involved in a case known in the media as “Ajnad Misr” ("Soldiers of Egypt") and the other two are involved in and attempt to storm the Library of Alexandria.

On May 7, 2019, the Court of Cassation, Egypt’s top judicial authority, issued death sentences for 13 people convicted in the Ajnad Misr case of targeting and killing police officers and threatening public peace and security.

In the second case, the court sentenced to death three defendants — one of whose sentence was later reduced — for disturbing the public peace, shooting at police officers and killing a number of them in the 2013 demonstrations that took place in Alexandria governorate.

A family member told Al-Monitor via phone, “The security forces refused to hand over the bodies to the family to bury them. We do not know what else they want after executing two brothers at the same time and condemning the father and mother to spend the rest of their lives without their children.”

The source, who declined to be named, said, “They informed us that the families will only be given the bodies after the National Security agency’s approval. We do not know what danger the bodies pose.”

He continued, “The officer who contacted us told us that there are several conditions that need to be met for us to receive the bodies, including that no reception and funeral prayers are held, and that they need to be buried immediately upon receipt for fear that the funeral could turn into demonstrations against the security forces. We are still trying to find common ground.”

According to We Record, only four bodies of the 15 have been returned so far.

During the African Commission on Human and Peoples' Rights meeting in Gambia in October 2019, the International Association of Lawyers said that Egypt leads Africa in the number of death sentences and called for an end to their use.

In September 2019, 16 international rights organizations including Amnesty International and Human Rights Watch called on the European Parliament to suspend the death penalty.

In a joint statement issued ahead of the Universal Periodic Review of Egypt,​ held under the supervision of the Office of the United Nations High Commissioner for Human Rights, the organizations urged the European Union to “establish a moratorium on the use of the death penalty with a view to abolishing it.”

Yasmine Nour El-Din, a human rights lawyer based in London, was one of the observers of the trials in the Ajnad Misr case. She told Al-Monitor that the convicted were “tortured during the investigations to make them confess to the crimes they are accused of committing.”

She added, “During the sessions before the court, they admitted that they had been tortured by the police officers to confess. Yet these testimonies were not taken seriously.”

She continued, “In the first years of President Abdel Fattah al-Sisi's rule, the judges were harsh with defendants in terrorism cases, which damages their credibility and impartiality. We demanded more than once to exclude judges for these reasons, but our requests were rejected.”

Al-Monitor reached out to Maj. Gen. Ashraf Ezz al-Arab, head of the prisons department at the Interior Ministry, to inquire why the ministry has not handed over the bodies to their families. He did not respond. The ministry has made no statements on the matter.