Cairo has executed 17 men convicted of committing a 2013 attack on a police station after human rights activists say they were tortured to confess. 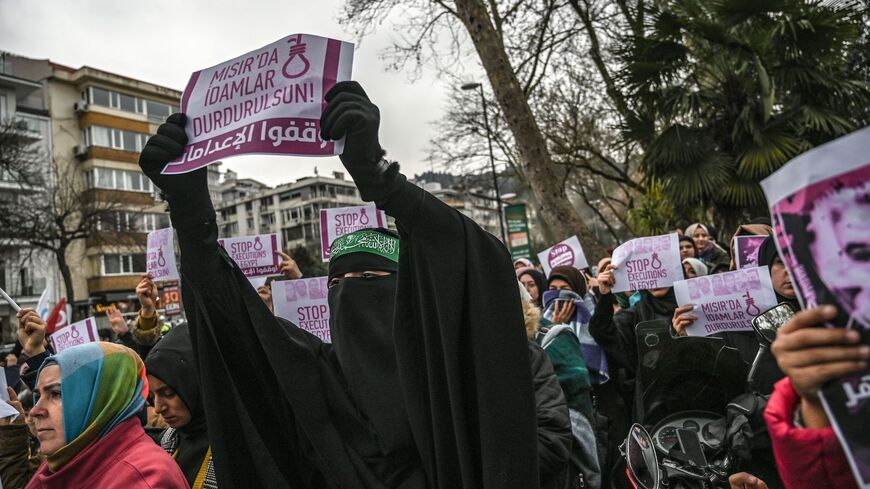 People hold signs reading "Stop executions in Egypt" in front of the Egyptian Consulate in Istanbul on March 2, 2019, during a demonstration after the recent execution of nine men. - OZAN KOSE/AFP via Getty Images

CAIRO — Egypt executed 17 prisoners April 26 and 28. They had been convicted of committing 2013 attack in the town of Kerdasa in Giza governorate, where gunmen stormed a police station and killed 11 policemen.

The executions prompted a number of local and international human rights organizations to issue condemnation and calls for an end to the death penalty in Egypt.

In August 2013, after police dispersed a sit-in held by Muslim Brotherhood supporters in Rabaa al-Adawiya Square, a number of gunmen stormed the Kerdasa police station. The department chief was among the 11 officers killed. Shortly after, security forces arrested dozens of residents of the area, accusing them of being behind the attack.

Haytham Abu Khalil, a well-connected political activist who resides in Turkey who was in contact with the executed defendants and was the first to publish their names, told Al-Monitor, “The Egyptian security authorities are themselves committing a crime against detainees, and we must resist the Egyptian regime’s increasing use of the death penalty.”

“One of the executed defendants was an 82-year-old man, and rather than being pardoned considering his age, he was executed without bidding his family farewell,” Abu Khalil added.

A lawyer working at a human rights center who followed the investigation into the Kerdasa attack told Al-Monitor on condition of anonymity, “A retrial should have been ordered, not an execution, especially considering that defendants said they were subjected to torture and severe beatings to confess that they had committed the crimes. The judicial authorities refused to investigate these allegations of torture.”

The lawyer added, “The defendants repeatedly called for investigations into their torture in places of detention but their calls fell on deaf ears. Their death sentence took us off guard — we did not think this number of defendants would be executed and we thought President Abdel Fattah al-Sisi would never approve the sentence.”

Article 470 of Egypt's Criminal Procedure Code states that an execution needs approval by the president, who may pardon the convict or to abstain from ratifying the sentence.

In a joint statement issued on April 30, seven Egyptian human rights organizations and campaigns condemned the executions, pointing out that they bring Egypt the dubious distinction of 2021's top executioner. The country ranked third after China and Iran in 2020.

The groups called on the Egyptian government to “put death sentences on hold until extensive public discussions are held about them and systematic studies carried out on such sentences' deterrence effect. There must also be a review of the crimes punishable by death.”

A member of the family of Omar el-Sayed Mohamed, one of the defendants, told Al-Monitor on condition of anonymity that the family was “surprised when they learned their son was executed, and just like everybody else they received the news from media outlets.”

“We did not receive any calls from the prison administration informing us of the date of the execution and granting us the right to one last visit. He was unexpectedly executed, and we were denied the right to see each other,” he concluded.