Why Mediterranean tensions may not benefit Erdogan at home

An equitable resolution to the crisis with Greece and France would be great for Turkey, but even that may not help the Turkish president’s approval ratings. 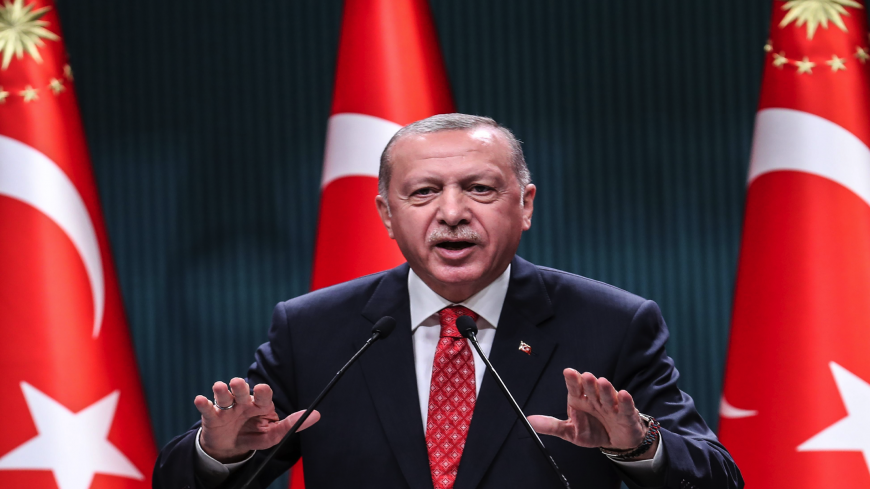 Turkish President Recep Tayyip Erdogan speaks to members of the press after a Cabinet meeting at the Presidential Complex in Ankara on Aug. 10, 2020. Erdogan called for dialogue while still pushing ahead with a contentious Mediterranean gas development plan that has outraged Greece and alarmed NATO and the EU. - Photo by ADEM ALTAN/AFP via Getty Images

Is Turkish President Recep Tayyip Erdogan using tensions in the Mediterranean to boost his domestic approval and win the yet-unannounced-but-constantly-rumored snap elections? Many of his opponents think so.

In his “A Look at the Week” show with Rusen Cakir on the independent news platform Medyascope on Aug. 28, the journalist Kemal Can underlined an interesting point: Turkey’s recent military operations in Syria boost Erdogan's approval ratings. The various crises in Syria prove that while a similar crisis in the eastern Mediterranean may boost Erdogan’s approvals, the effect will be short-lived. Erdogan’s attempts to use nationalist rhetoric to undermine his domestic opponents call into question the true aims of his foreign policy moves.

Indeed, several Turkish sources who spoke to Al-Monitor on condition of anonymity warned that Turkey’s ongoing conflict with Greece and France in the Mediterranean, along with the announcement of the discovery of large gas reserves under the Black Sea and the decision to turn the Hagia Sophia into a mosque, may be mere ploys to raise Erdogan’s likeability with religious and nationalist voters.

Allegedly, Erdogan wants to boost his approvals — reported to have fallen below 30% earlier this year — so he can call for snap elections. The far-fetched plan presumes that Istanbul Mayor Ekrem Imamoglu would quit his post to run against Erdogan. (Under Turkish law, public servants — be they appointed or elected — must quit their positions when they run for public office.) Erdogan’s Justice and Development Party (AKP) holds a majority in the Istanbul municipal council, so the city councilmen would elect an Erdogan ally as mayor until the next local elections in 2024. That would allow the AKP to recapture a major source of municipal income for its electoral base.

The law of unintended consequences suggests that Erdogan may not get his wish. Recent opinion polls show that the two parties that splintered from the AKP — the Democracy and Progress Party led by Erdogan’s former Economics Minister Ali Babacan and the Future Party of former AKP Chairman and Prime Minister Ahmet Davutoglu — are increasing their share of the votes at the ruling party’s expense. Their numbers are still small at 4% or less, both parties are still busy building their local chapters and they are trying to formulate a coherent communications strategy. However, both Babacan and Davutoglu proved their mettle as able administrators during their AKP years. Their increased exposure may offer new alternatives for Erdogan’s conservative base.

Meanwhile, domestic calculations also seem at play in France. In the wake of the “yellow vests” protests that began in the fall of 2018, Macron experienced miserable approval ratings until recently. His big break came in July when the people of France credited their president for the successful negotiation of the EU’s 750 billion euro stimulus. With his newfound confidence and following in the footsteps of many postwar French presidents to expand his country’s global profile, Macron put his foreign policy activism on overdrive. He visited Lebanon twice since the tragic port explosion in Beirut on Aug. 4 and paid a one-day visit to Iraq on Sept. 2, where he underlined Iraqi sovereignty — a clear snub at Turkey, Iran and the United States. Macron’s meetings with Iraqi President Barham Salih and Kurdistan Region Prime Minister Nechirvan Barzani, a close partner of Erdogan, may not be able to challenge Ankara’s influence (or that of Tehran or Washington) so quickly. But it attests to Macron’s attempts at a dynamic foreign policy bearing to secure a stronger footing at home.

While Erdogan and Macron seem too preoccupied to boost their domestic popularity at each other’s expense, Greek Prime Minister Kyriakos Mitsotakis is the odd man out. Evangelos Areteos, a roving correspondent for the Cypriot daily Charavgi and non-resident fellow on EU and Turkey affairs for the Diplomatic Academy at the University of Nicosia, told Al-Monitor, “Unlike Erdogan, Mitsotakis does not [need this crisis].” Areteos said that “Greek society was very satisfied” with Mitsotakis’ response to the COVID-19 pandemic and Ankara’s attempts to use refugees as a bargaining tool earlier this year. He added that the Greek public expects Mitsotakis to focus on the economy, and the prime minister is happy to oblige. “If we don’t have this crisis tomorrow, Mitsotakis will be the happiest leader in the world.”

A crisis may be a terrible thing to waste for Erdogan and Macron, but all crises must come to an end. That begs the question as to how the Turkish president will step away from all this. What is Ankara’s “exit strategy” or “endgame” in the eastern Mediterranean, assuming it has one? After all, Ankara is mostly alone in the Mediterranean and, given Turkey’s economic and financial troubles, it can ill afford a war.

A defense and security consultant in Istanbul who spoke to Al-Monitor on the condition of anonymity said, “I do not see an endgame here. Ankara began to emphasize its rights in the Mediterranean only last year with the maritime boundary agreement with Libya in the wake of Erdogan’s big loss in the municipal elections. The economy is not doing well; problems abound. I think all of these issues are distractions to mask internal problems.”

Most Turks (including this author) agree with Erdogan’s position that Turkey ought to receive a more equitable share from the riches of the eastern Mediterranean. The consultant, however, warns us not to raise our hopes. He said, “Turkey has not demonstrated a strong legal standing in resisting Greece’s claims under [the United Nations Convention on the Law of the Sea]. Turkey must document all its past objections to Greek arguments. At present, international law gives Greece a stronger hand, and it needs to compromise only a little bit compared to Turkey.”

For powerful people like Erdogan and Macron, there may be rational reasons to escalate foreign crises. But in a world struck by a merciless pandemic and where hydrocarbon prices have fallen like a rock (they will most likely stay there even after the pandemic recedes), fighting over gas and oil appears too pointless.