Rouhani says Iran isn’t a ‘bargaining chip’ in US elections

Iran's president told the UN General Assembly that any future administration must "surrender" to Iran. 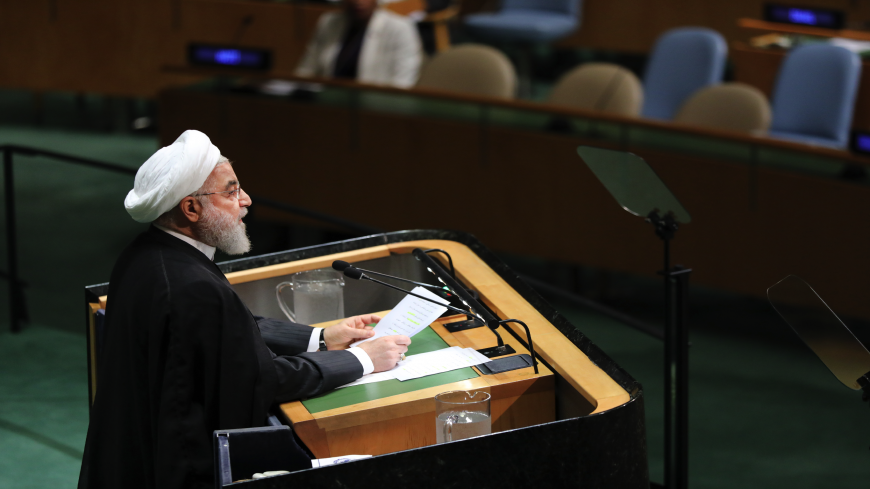 In his address to the UN General Assembly, Iran’s President Hassan Rouhani said his country cannot be used as a “bargaining chip” as President Donald Trump seeks reelection this November.

"We are not a bargaining chip in US elections and domestic policy,” Rouhani told the virtual gathering of world leaders. “Any US administration after the upcoming elections will have no choice but to surrender to the resilience of the Iranian nation.”

US Ambassador to the UN Kelly Craft described Rouhani’s speech as “a tour de force of dishonesty.”

“He spoke of ‘blatant and gross’ violations of the UN Charter, but apparently with no sense of irony. Iran is the world’s leading sponsor of terrorism & fuels conflict across the Middle East,” Craft tweeted Tuesday.

Tensions between the United States and Iran have soared under Trump who, in May 2018, pulled out of the landmark nuclear agreement struck between Iran and major world powers. Since the US withdrawal, Iran has enriched uranium at levels beyond what’s permitted under the nuclear accord.

Joe Biden wants to see the deal, made in the era of Barack Obama, survive and has said his administration would “rejoin the agreement as a starting point for follow-on negotiations” if Iran returns to full compliance with the deal.

But on Monday, Iranian Foreign Minister Mohammad Javad Zarif ruled out renegotiating the terms should Biden win the presidency.

“The United States did try its best to get a good deal. And the previous administration, where candidate Biden was the vice president, believed it was a good deal. Now, we're not going to negotiate a deal,” Zarif told the Council on Foreign Relations in a virtual interview.

"It's immaterial for us who sits in the White House. For us, what is important is how they behave," he added.

Nearly every member of the UN Security Council has dismissed the administration’s effort to unilaterally reinstate sanctions lifted under the Iran deal. On Sunday, France, Germany and the United Kingdom issued a joint statement saying the administration’s "purported notification" of reimposed sanctions "would be incapable of legal effect."