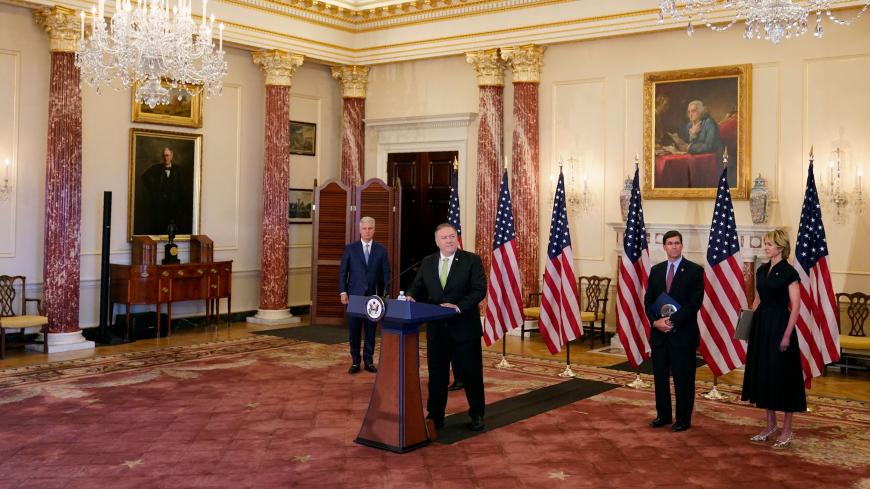 US Secretary of State Mike Pompeo speaks during a news conference to announce the US administration's restoration of sanctions on Iran, on Sept. 21, 2020, at the US State Department in Washington, DC. - PATRICK SEMANSKY/AFP via Getty Images

The United States imposed a raft of new sanctions on Monday targeting Iran’s Defense Ministry, Venezuelan President Nicholas Maduro and more than two dozen other targets in an effort to enforce international sanctions that most of the United Nations Security Council says the United States is unable to unilaterally reinstate.

“Rather than wait for the day that Iran threatens the world with a nuclear weapon, the United States is again fulfilling the best traditions of American global leadership and taking responsible action,” Secretary of State Mike Pompeo said in a statement.

On Monday, President Donald Trump announced an executive order freezing the property of those who “contribute to the supply, sale, or transfer of conventional arms to or from Iran, as well as those who provide technical training, financial support and services, and other assistance related to these arms.”

The administration also imposed new sanctions and export control measures on 27 entities and individuals it says are connected to Iran’s proliferation networks, including targets linked to the Atomic Energy Organization of Iran. Maduro, whose country has repeatedly purchased gasoline from Iran in violation of US sanctions, was also blacklisted.

“This administration will use every tool at our disposal to stop Iran’s nuclear ballistic missile and conventional weapons pursuits, which it uses directly to threaten and terrorize the rest of the world,” said Treasury Secretary Steven Mnuchin at a Monday press briefing unveiling the sanctions.

Most of the UN Security Council says Washington lacks the legal authority to reinstate sanctions under the nuclear deal it withdrew from in 2018. But the Trump administration argues that it is able to trigger sanctions because the United States remains a signatory of the UN resolution that endorsed the nuclear accord, known as the Joint Comprehensive Plan of Action (JCPOA).

“As we have in the past, we will stand alone to protect peace and security at all times. We don’t need a cheering section to validate our moral compass,” UN Ambassador Kelly Craft said Monday.

“False hopes on part of the Security Council members that the JCPOA might contain Iran’s nuclear ambitions do not excuse members from their obligations to reimpose sanctions pursuant to the process outlined in Resolution 2231,” Craft said. “It is now our expectation that all UN member states will fulfill their legal obligation and reimpose sanctions on Iran.”

On Sunday, France, Germany and the United Kingdom issued a joint statement saying the administration’s "purported notification" of reimposed sanctions "would be incapable of legal effect." The European signatories to the deal share Trump’s concerns about Iran’s nuclear ambitions, but they fear restoring sanctions could blow up the nuclear agreement by leaving Tehran with few incentives to comply.

“We have worked tirelessly to preserve the nuclear agreement and remain committed to do so,” the three European countries, known as the E3, said.

After announcing the sanctions were “back in effect,” Pompeo warned on Saturday that the United States would "impose consequences" if the rest of the Security Council’s member states failed to recognize them.

The United States rolled out another round of sanctions as part of its so-called "maximum pressure" campaign last week, designating 47 Iranian individuals and entities who, according to the Treasury Department, are involved in conducting cyber and malware attacks against perceived adversaries, including foreign governments, Iranian dissidents, journalists and international travel companies.