In Greece, US Secretary of State Mike Pompeo urged Athens and Ankara to resume talks over maritime disputes ahead of an EU summit later this week that is expected to address lingering tensions in the eastern Mediterranean. 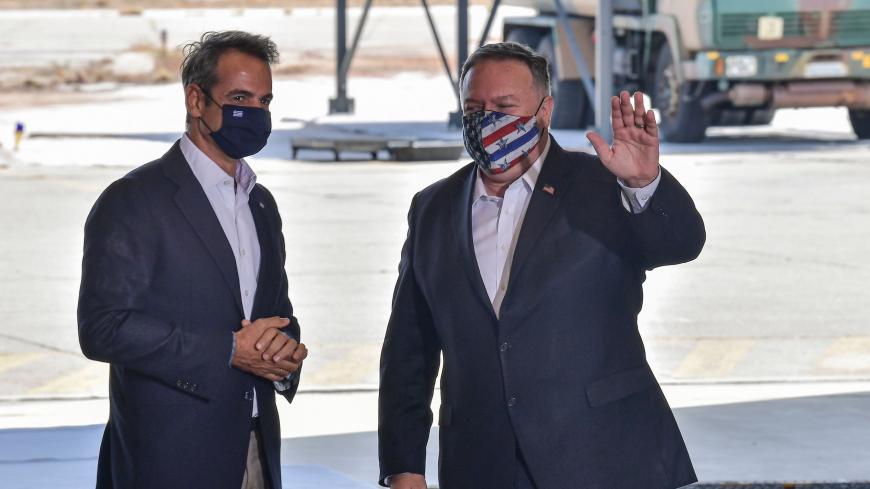 US Secretary of State Mike Pompeo (R) waves next to Greek Prime Minister Kyriakos Mitsotakis (L) during his visit to the Naval Support Activity base at Souda, the foremost US naval facility in the eastern Mediterranean on the Greek island of Crete. - ARIS MESSINIS/AFP via Getty Images

ISTANBUL — US Secretary of State Mike Pompeo arrived in Greece Monday and urged Athens and Ankara to resume talks over lingering disputes over maritime boundaries in the eastern Mediterranean Sea.

During his two-day visit, Pompeo said US-Greece relations were at an “all-time high” Tuesday, highlighting increased security cooperation between Washington and Athens before prompting Greece and Turkey to de-escalate a long-running spat over contested areas of the Mediterranean.

The visit comes ahead of an EU summit later this week in which the leaders of member states will consider imposing sanctions on Ankara for gas exploration activities in disputed waters that have been put on hold to allow for bilateral talks between the neighboring NATO allies.

On Sept. 10, Turkish and Greek military delegations began a series of technical talks at the NATO headquarters in Brussels and broader exploratory talks between state leaders are expected to begin soon, a move Pompeo lauded.

“We hope the exploratory talks not only get kicked off right, but it’s important that they’re resolved in a way that delivers outcomes that each of the two nations find more than acceptable,” Pompeo told Greece’s ANA state news agency Monday.

Turkish naval vessels conducted prescheduled drills near Greek waters Tuesday between the Greek islands of Rhodes and Kastellorizo, but Turkish President Recep Tayyip Erdogan maintained Ankara is open to pursuing negotiations with Athens to address disagreements over the maritime delineations, whose current form he views as infringements on Turkey’s continental shelf.

“I call on all our neighboring countries in the Mediterranean, Greece in particular, to abandon seeing the Eastern Mediterranean issue as a zero-sum game,” Erdogan said in Istanbul Monday before extending his discourse to natural resource rights in the region. “Let us make energy a means for cooperation, not for conflict.”

Pompeo visited the Souda Bay naval base on the Greek island of Crete Tuesday, where he announced the USS Hershel Woody Williams would be permanently stationed. Turkish media reports have suggested the United States is seeking to relocate operations at the Incirlik military base in Turkey to Greece, but US defense officials have denied such claims.

Reflecting on growing US-Greece defense ties, Ozgur Unluhisarcikli, Ankara director for the German Marshall Fund, said alliances in the region are shifting following Athens’ rapprochement with both the United States and Israel.

“Turkey’s reliability as an ally in the eastern Mediterranean is decreasing from Washington’s perspective and they are now looking for not substitutes to Turkey, but for additional allies in the region,” Unluhisarcikli told Al-Monitor.

US military support to Greece has gradually expanded in recent years, particularly since the Athens government ratified a mutual defense cooperation agreement in January 2019 and the US Congress passed the Eastern Mediterranean Security and Energy Partnership Act in December of that year.

Michael Tanchum, a senior fellow at the  Austrian Institute for European and Security Policy, said the US military has long been present in the eastern Mediterranean but it began a process to reengage with Greece in 2018.

“The US was proceeding cautiously, balancing US interests in various areas of the region ranging from Syria, Cyprus, to Libya, among others,” Tanchum told Al-Monitor. “Events in the eastern Mediterranean are forcing Washington to act more quickly, accelerating the pace at which it deepens its involvement.”

He added, “After the US election, we may see greater US involvement.”

With US elections scheduled for Nov. 3, Unluhisarcikli said the upcoming vote may have also played a role in Pompeo’s visit to Greece this week.

“Greek-Americans constitute an important voter base in the United States and … there are a couple of battleground states where the Greek-American vote could make a difference,” Unluhisarcikli told Al-Monitor.

The developments come as observers await an EU summit on Oct. 1-2, delayed for a week after European Council President Charles Michel went into self-quarantine following possible exposure to COVID-19.

Officials from Cyprus, Greece and France have called for sanctions to be imposed on Ankara for its recent gas exploration activities in the eastern Mediterranean, but the ongoing crackdown on protests in Belarus may take precedence among EU officials.

Leaders in the Republic of Cyprus blocked long-sought sanctions on the Belarusian government last week, stating they would only approve the measures if EU member states committed to a tougher stance against Turkey as well.

Speaking during a German Marshall Fund hosted webinar Friday, Nathalie Tocci, deputy director of Istituto Affari Internazionali in Italy and special adviser to EU foreign policy chief Josep Borrell, said sanctions on Turkey would not result in productive outcomes and instead called for “a reset in the Turkey-EU relationship.”

“I would be very surprised if [penalties are imposed] in a context in which exploratory talks between Greece and Turkey will be or look like they will be resumed,” Tocci said during the webinar.