Palestinians say not even caves safe from Israeli bulldozers

Residents of the West Bank village of Farasin are living in fear of displacement after receiving demolition notices for their houses, tents and even caves. 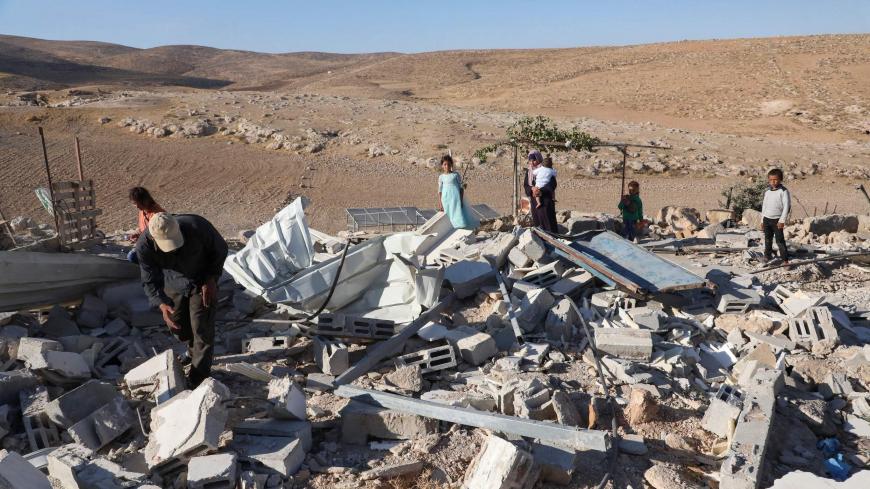 A Palestinian family whose house located in area C of the Israeli-occupied West Bank was demolished by the military last month is pictured at the ruins of their home, near the village of Yatta, south of Hebron, on Aug. 10, 2020. - HAZEM BADER/AFP via Getty Images

RAMALLAH, West Bank — Ahmed Amarneh, a farmer in the village of Farasin, lives in a state of constant anxiety. He fears the Israeli authorities will demolish the cave enclosure where he and his pregnant wife and young child live. The Israeli Civil Administration had sent him a demolition notice on July 29.

The village, near the city of Jenin in the northern West Bank, is situated on hills full of ancient caves and ruins — and some aged infrastructure such as a well that is more than 200 years old. Residents still use it for drinking water and livestock.

The administration delivered 36 other demolition notices concerning residential and service facilities, including two wells and livestock and poultry barns.

Israel prevents Palestinians from building in the area known as Area C, which represents 61% of the West Bank and is subject to Israeli security and administrative control under the Oslo Accords.

The Israeli Civil Administration cited a lack of permits for the structures and granted residents 14 days to file an objection. Amarneh's notice was different, however, as it came from the Israeli military and he was left only 96 hours to object. He was unable to do so and now dreads the demolition of his home that could come at any moment.

In mid-2017, Amarneh began building a small house in the village. His neighbor’s house was demolished by the Israeli Civil Administration for not having a building permit. Civil Administration staff had warned him that his house would face the same fate should he complete its construction.

The warning led Amarneh, who holds a bachelor's degree in civil engineering from An-Najah National University, to explore living in one of the caves around the village in 2018. He enclosed its entrance with stone walls, installed an iron door and two windows and added some simple pieces of furniture. He also set up a portion for his sheep.

“I resorted to the cave as I feared the Israeli authorities would persecute me and take arbitrary and racist measures against me. I wanted stability for my family,” he told Al-Monitor. “I built out the cave as much as possible to make it a suitable place for living. Now, Israel is threatening to demolish everything. I would hear about Israel's racist behavior, and now I'm witnessing it firsthand.”

He explained, “I was able to extend a pipe from a well to collect water using a manual pump. We get electricity for three hours every night from a generator in the village.”

He added, “I received a military notice with a 96-hour time limit to file an objection. That period has expired, and I expect my cave to be destroyed at any moment now. Life in a cave is scary in itself. But now I fear I will lose the only shelter that houses my family.”

Asked about his options, Amarneh said, “I live in a cave. If I lose it, I will live anywhere. I will erect a tent over the rubble and live in it.”

The 200 residents of Farasin live in a state of fear as the Israeli authorities demolish their homes and tents, pressuring them from their lands to make room for the expansion of the adjacent Halamish settlement.

On March 30, the Palestinian government created a village council to independently manage Farasin’s affairs. It was previously treated as part of the municipality of the neighboring town of Qafin.

The head of the Farasin village council, Mohammed al-Nasr, told Al-Monitor that the village faces constant danger and threats, pointing out that the Israeli Civil Administration stormed the village on July 29 and handed its residents 36 demolition notices for homes, tents and barns. It also banned the residents from using the land for agricultural purposes.

Nasr said the residents submitted 18 objections, showing title deeds and boundary maps. They are now awaiting the Civil Administration’s decisions on their appeals, which also included requests for building permits.

Nasr asserted that the residents will not leave their land under any circumstances. They earn their living from agriculture and raising livestock, and are determined to retain their lands despite the lack of basic services.

Since the notices arrived on July 29, Israeli military bulldozers demolished a stone and tin house and a 250-cubic-meter water tank, citing unlicensed construction. The owner, who had been served with a military notice, ended up erecting a tent over the rubble.

Nasr said that the administration has not given a date for responding to the residents' appeals. “The residents fear Israel will carry out large-scale demolitions that would affect the entire village,” he said, adding, “Israel had denied construction licenses for dozens of residential communities. Yet the residents remained in their village. They still refuse to leave. They will set up tents over the rubble and continue living in them should Israel demolish their houses. The lands registered in the name of residents amount to 6,000 dunams.”