The fire is in the same area as the Aug. 4 port explosion from which Lebanon is still recovering. 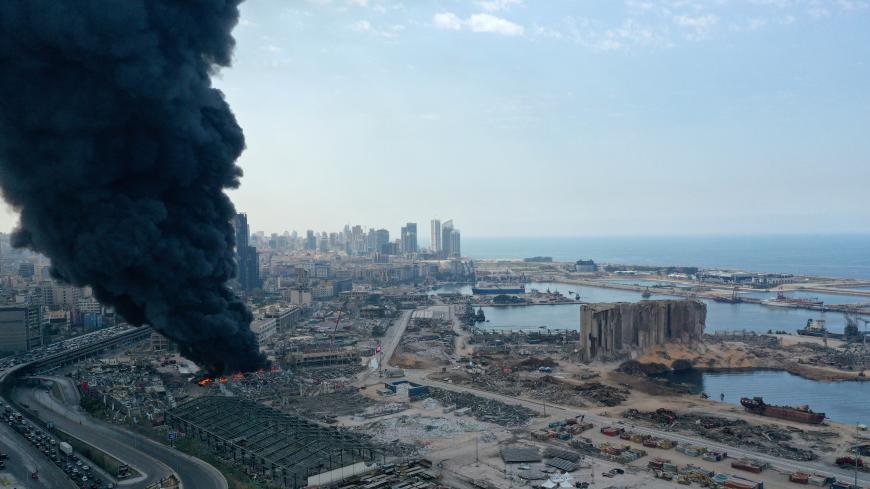 An aerial view of the black smoke following a fire that erupted in Beirut Ports Free Zone on Sept. 10, 2020 in Beirut, Lebanon. - Haytham Al Achkar/Getty Images

Another fire in Beirut prompted panic on Thursday. The Beirut port explosion that killed nearly 200 people in the city was only a little over a month ago.

This time, a large fire broke out in a warehouse in Beirut port’s duty-free zone. The warehouse stored tires, the state-run National News Agency reported.

Videos obtained by Lebanese media outlets showed a massive blaze that created even bigger clouds of black smoke. Both civil defense firefighters and the Lebanese army are working to extinguish the flames and using helicopters to shoot water down from above, the Lebanese army said in a statement.

On Aug. 4, a massive blast ripped through the Beirut port when some 2,700 tons of the fertilizer ammonium nitrate caught fire and exploded. The investigation and search for the missing continue.

Lebanese people have experienced significant hardship since the August explosion, and Thursday's fire has added to this. Many lost their businesses, and hundreds of thousands were rendered homeless as a result of the explosion. Lebanon was already reeling from a financial crisis that included the devaluation of the Lebanese pound against the dollar and banks instituting limits on how much people can withdraw. There have been anti-government protests since October, and anger at the government strengthened following the explosion.

Armed groups have also clashed south of Beirut since the blast. Lebanon experienced a civil war from 1975 to 1990.

The scenes of yet another fire in the heart of the city led some people to temporarily drive out of Beirut.

The entire Lebanese governmental Cabinet resigned in the wake of the explosion, and former diplomat Mustapha Adib is the new prime minister. Negotiations with the International Monetary Fund have yet to produce an agreement to help Lebanon recover financially. French President Emmanuel Macron has been vocal in supporting reforms in the country since the blast, and other countries have also pledged assistance.