A dog alerted Chilean rescuers to a possible sign of life near downtown Beirut and the search has provided hope to people in the city one month after the deadly explosion. 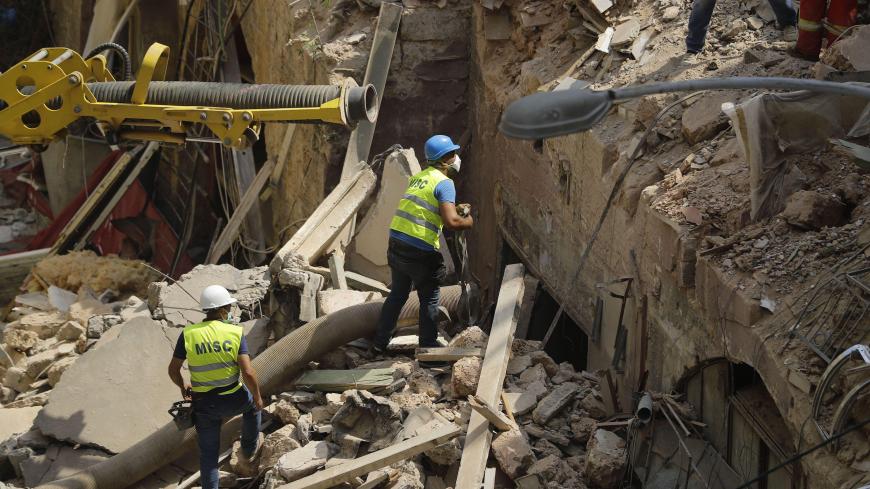 Rescue workers prepare to use a tube to vacuum debris from a badly damaged building in Lebanon's capital, Beirut, in search of a possible survivor of a megablast at the adjacent port one month ago, on Sept. 4, 2020. - JOSEPH EID/AFP via Getty Images

On Thursday morning, a dog working with a Chilean rescue team alerted them that there could be someone beneath debris in the Gemmayzeh neighborhood of Beirut, the local news outlet The Daily Star reported.

The area is a center of Beirut’s famous nightlife and not far from the scene of the Aug. 4 explosion. Images of the scene on social media showed a large pile of rubble next to a pizzeria.

The rescuers began a search after the dog’s signal, but on Thursday night, the army temporarily halted the operation, saying parts of the building could fall and kill rescue workers. They resumed work later that evening after two cranes helped secure the area, the Lebanese news site Naharnet reported.

The rescue effort has received considerable attention in Lebanon. Crowds screamed, “Bring the crane now!” after the army paused the search, according to The Daily Star. The Arabic-language hashtag “pulse of Beirut” is trending on Twitter. This refers to people thinking a person could still be alive underneath the destroyed building. Videos of the dog working with the Chilean team have been shared widely on social media.

The search for the possible survivor continues as the explosion hits its one-month mark. Nearly 200 people died and hundreds of thousands were rendered homeless when the massive blast ripped through the city. Preliminary investigations point to 2,700 tons of the fertilizer ammonium nitrate exploding after catching fire in a warehouse in Beirut’s port.

There was massive outrage at the government’s seemingly careless decision to leave so much of the combustible substance in the heart of the city. The entire Lebanese Cabinet resigned in the wake of the tragedy. The blast has worsened an already difficult situation in the country. Lebanon is contending with an economic crisis, anti-government protests against corruption and mismanagement, and the COVID-19 pandemic.

Many countries pledged to help Lebanon following the explosion, and that is how the Chilean rescuers arrived. The South American country is experienced with such crises following a 2010 earthquake that killed more than 500 there.