Israeli-Arabs split over agreement with the Emirates

Some Israeli-Arabs reject the deal with the UAE, while others cheer the opening to the Arab world. 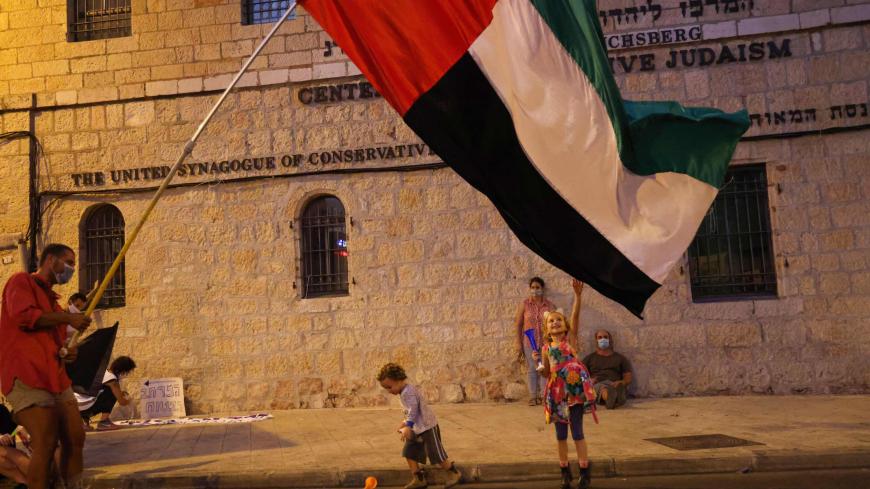 Israeli children play with the flag of the United Arab Emirates during an anti-government rally in front of the prime minister's residence in Jerusalem, on Aug. 29, 2020. - EMMANUEL DUNAND/AFP via Getty Images

It was only last month that the world first heard the dramatic announcement that the United States had mediated an agreement, normalizing relations between Israel and the United Arab Emirates. “Historic peace agreement between our two GREAT friends,” tweeted US President Donald Trump on Aug. 13. Trump also described it as a “HUGE breakthrough,” a term Israeli Prime Minister Benjamin Netanyahu later applied to a corollary of the deal. UAE Crown Prince Mohammed bin Zayed announced that his country had decided that it would be “setting a roadmap towards establishing a bilateral relationship” between the two countries in exchange for a halt to Israeli annexation of Palestinian lands.

Moreover, within just a couple of weeks, an Israeli delegation led by the head of the National Security Council, Meir Ben Shabbat, left for Abu Dhabi with an American delegation on the first commercial flight from Tel Aviv to the UAE. Shortly afterward, Saudi Arabia announced that it would allow flights between Israel and the UAE to fly over its airspace. Then Bahrain seconded this, saying it would also allow these flights to fly over it.

With one announcement coming right after the other, the mood in Israel is celebratory, at least for the country’s Jewish population. Almost all Israeli Jews support the normalization of relations with the UAE.

In contrast, the response among the Arab population is mixed, and the polemics have just begun. Those opposed to the agreement argue that it will shunt the Palestinian issue off to the side and remove it from the agenda. They worry that this agreement will lead to further agreements with other Arab states, and that these will fail to consider the Palestinians. But there are also those who speak of a unique opportunity, which will never present itself again, to build ties and connect with the Arab world, not to mention the economic and tourism benefits of the agreement. This leads to the question: Which of the Israeli Arab community’s two identities will be the decider when it comes to the agreement: its Israeli identity or its Palestinian identity?

Anyone keeping tabs on all the official declarations will know that the agreement puts an end to Israel’s plan to annex Palestinian territory and resulted in the opening of the Al-Aqsa Mosque to all Muslims who arrive in the country through the UAE. That in itself is no small achievement. Nevertheless, it seems as if there are still concerns that the normalization of relations without a peace agreement with the Palestinians will perpetuate the occupation. The first to protest the agreement were Balad party activists. They demonstrated against it in Nazareth last month under the slogan, “Palestine is stronger than normalization.” They refuse to accept normalization without the creation of a Palestinian state.

Film director Belal Yousef told Al-Monitor, “As an Israeli citizen who defines himself as a Palestinian first and foremost, I support peace between all peoples and nations in the world, and that does not stop at an agreement between Israel and the UAE. At the same time, I regret to say that this is nothing more than a 'deal' in every sense, benefiting Trump right before the US election. In that sense, it is no different from the Kosovo deal [to recognize Israel]. This is especially true considering that a deal for the United States to sell F-35 fighter jets to the UAE is also on the table. Anyone interested in achieving real peace would make peace with the people with whom they have a conflict, instead of searching for peace in faraway countries. Furthermore, according to the Arab Peace Initiative, an agreement with the Palestinians, who are Israel’s neighbors, should lead to a peace agreement with all the Arab states.”

On the other hand, there are those who see this agreement as an opportunity for them to establish ties with the Arab world, something that has been denied them until now because of their Israeli citizenship and passports. Morsi Baiadsy, an artist and conductor, told Al-Monitor: “I visited Abu Dhabi a few years ago as part of my work as a conductor. I must say that I was exposed to one of the most advanced nations in the world. The people there don’t focus on politics. They are more concerned about business and quality of life. For my colleagues and me as artists, this is an excellent opportunity to take center stage in the Arab world, especially since all of Arab music’s top stars eventually show up to play in the UAE. And in the end, we all hope that a thriving Palestinian state will be established beside Israel.”

Anyone who has followed developments in the Middle East since the 1993 Oslo Accord knows that there have been longstanding informal relations between Israel, the UAE and several other Arab states, at least behind the scenes. Nevertheless, this normalization agreement came as a total surprise to more Israeli Jews than it did to the country’s Arab population. The sense in Israeli-Arab society is that relations that were once kept quiet are now coming out from under the table and placed in the spotlight.

And what do Israeli Arab women think about the agreement? Just like the men, their opinions are split. Safaa Jabareen of Umm al-Fahm told Al-Monitor, “We are all aware of the fact that there were always normal relations between Israel and the UAE, but these were kept secret. Now that Trump and the US have granted their imprimatur, the rest of the world has been made aware of them. While I think that this is an economic and business breakthrough that will connect us with the rest of the Arab world, we mustn’t think that it is all good. We cannot ignore the reality in which we live, including the ongoing occupation. If the parties want to ensure the survival of this agreement, they need to consider ways to end the Palestinian-Israeli conflict.”

In contrast, Shireen Abu-Asaad of Nazareth said, “I think that this agreement will be advantageous to both countries. It will contribute to the economy and technology, and no less to politics and strategic affairs. We will see a strengthening of the axis connecting Israel with the pragmatic Arab states in their conflict with the radical Arab states.”

There can be no doubt that what we are witnessing is the consequence of conflicting identities among Israel’s Arab citizens. It is a conflict that originates with the dual identities that they have been living with for decades. On one hand, there are those who want to continue feeling Palestinian. They have a hard time imagining an agreement that does not include the establishment of a Palestinian state. On the other hand there are those who obviously support the creation of a Palestinian state but still prefer to see the glass as being half full. To them, this agreement affords them a chance to join the Arab world, which has denied them access until now, because of their complex identity and their Israeli citizenship.