Israeli Arabs enjoy fruits of normalization with the Emirates

For some Israeli Arabs the normalization agreement with the United Arab Emirates opens a range of possibilities for both business and tourism. 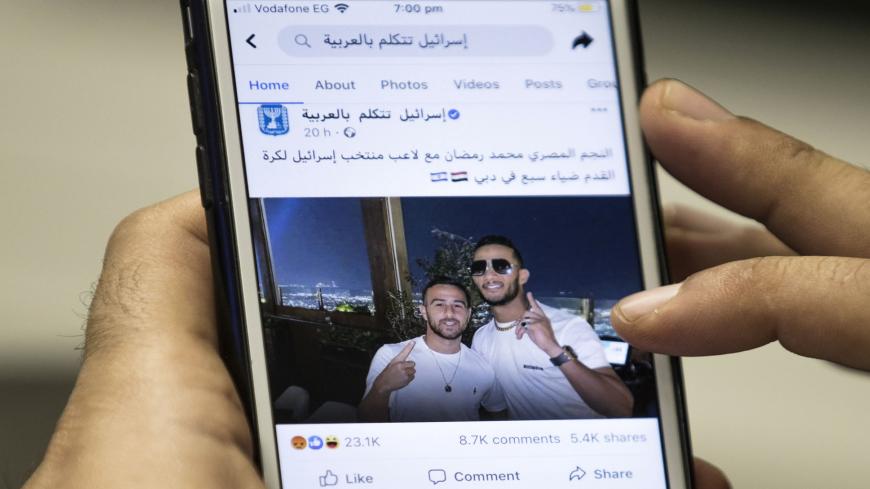 A man holds a phone showing a picture of Egyptian actor and singer Mohamed Ramadan (R) hugging Israeli midfielder Dia Saba in Dubai, posted by the official Facebook page of the State of Israel in Arabic, Nov. 22, 2020. - Khaled Desouki/AFP via Getty Images)

Egyptian actor and singer Mohamed Ramadan found himself at the center of a storm on social media following his photos in Dubai with Israeli singer Omer Adam and Israeli-Arab soccer player Dia Saba. Both Adam and Saba arrived to Dubai following the normalization agreement between Israel and the United Arab Emirates (UAE). Still, this controversy does not seem to stop the momentum created by the agreement, including one within the Israeli-Arab public.

In fact, several Israeli Arabs have decided to ride the momentum of the agreement. They have started flying to the Emirates, a destination that up to now had been closed to those with an Israeli passport. Some of them fly for business, others for pleasure.

It started with the Bank Hapoalim initiative that sent Sept. 8 a delegation of 14 businesspeople, among them businessman Ahmad Dabbah from Dir al-Assad, for an official visit to the UAE, which included meetings with the commerce department and representatives from the financial and banking sectors. On Sept. 14, the chairman of the Board of Bank Leumi, Samer Haj Yehia, headed a delegation of businessmen including Ahmad Afifi of Nazareth. At the end of their visit they announced the signing of an agreement with banks from Dubai and Abu Dhabi.

So far this month, an increasing number of Israeli-Arab citizens have flown to Dubai to enjoy this beautiful city, which is home to the tallest tower in the world, Burj Khalifa, the largest shopping mall in the world and an indoor ski slope.

Hadeel Tellawi of Taibe, who is currently visiting Dubai, told Al-Monitor, “I’m visiting Dubai for the first time and I’m amazed at the beauty of this city. In my view Dubai is a source for Arab pride, a city we can be proud of all over the world. What is striking and surprising to me is the sheer cleanliness of the city, where they clean and wash the streets and entertainment venues every day. When I went up Burj Khalifa I was thrilled that an Arab country managed to build the tallest building in the world. [Dubai is] a gorgeous, unique, interesting and charming city.” When asked how the UAE is dealing with the coronavirus pandemic, she said, “They enforce the restrictions and wearing of masks and don’t let anyone take off the mask even for a second, so you feel very safe.”

In the past, a number of Israeli Arabs have visited the UAE for business and pleasure. Most did so with a Palestinian passport they obtained from the Palestinian Authority (PA) after much bureaucracy, which enabled them to fly to a variety of destinations in the Arab world through the airport in Amman, since an Israeli passport prevented them from doing so.

Examples of such visits were those of Israeli-Arab singers Haitham Halaila and Manal Mousa, who participated in the "Arab Idol" competition, the most popular TV show in the Arab world, in 2014 in Lebanon. This gave them the opportunity to perform in many Arab countries, including in the UAE.

The normalization agreement has not only made travel between Israel and the UAE possible, it is also, according to many, an opportunity to build bridges and connect with the Arab world. The first to reap the fruits of the agreement was Israeli national soccer team player Saba from Majd al-Krum, who made history and joined Al-Nasr Dubai in a deal that is considered historic on many levels, becoming the first Israeli soccer player to play for the Emirati team.

Amir Assi from Kafr Bara is another example of someone who has taken advantage of the normalization agreement. Assi heads Al-Amir Group that specializes in building business and tourist connections with the Arab world and the PA, including arranging flights to Saudi Arabia for hajj and umrah, the nonmandatory pilgrimage that can be undertaken throughout the year. He has recently signed an agreement with Flydubai to arrange direct flights from Ben-Gurion Airport to the UAE.

In a conversation with Al-Monitor, Assi said that he was on his way to meet with one of the most well-known businessmen in Dubai. “We have recently opened an office for Al-Amir Group in Dubai and our representative in the office is Manal Mousa, who became famous for her participation in 'Arab Idol.'”

Assi noted that his company is the first from Israel to sign an agreement for direct flights to Dubai, whether for business or pleasure. “Up to now five of our flights have flown to Dubai — the passengers were half Arab and half Jewish. The decision to open an office in Dubai came in response to a wave of requests we received to advance business connections in the UAE. We are now working to set up a delegation that will include 70 to 80 leading businessmen in Israel, to hold business meetings with the owners of Dubai Mall and Burj Khalifa at the beginning of January.”