Following normalization of ties between Israel and the United Arab Emirates, the Emirati Al-Nasr soccer club has recruited Arab-Israeli star Dia Saba, who will be the first Israeli to join a Gulf league. 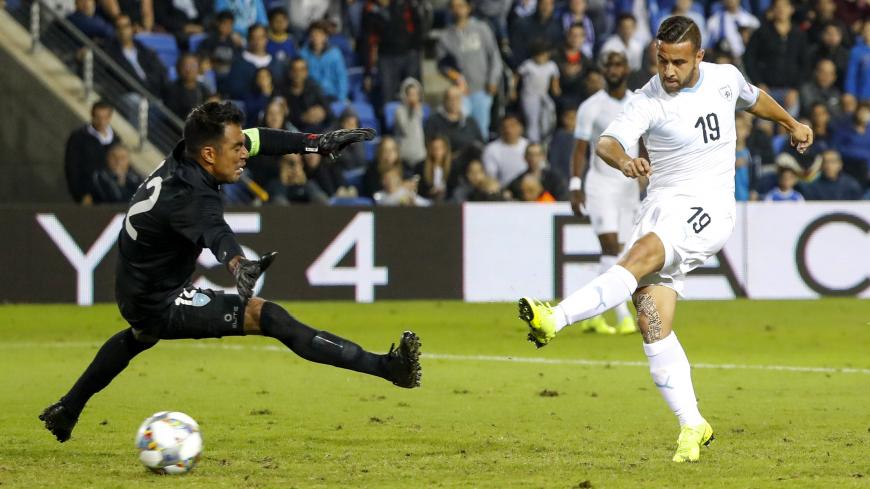 Israel's midfielder Dia Saba (R) shoots the ball past Guatemala's goalkeeper Paulo Motta as he scores during the FIFA friendly football match between Israel and Guatemala at Netanya Municipal Stadium in the Israeli coastal city of Netanya on Nov. 15, 2018. - JACK GUEZ/AFP via Getty Images

History was made when Arab-Israeli soccer player Dia Saba signed with Dubai’s Al-Nasr soccer club. As he leaves the Chinese club Guangzhou R&F to join the team from Dubai, 28-year-old Saba will be the first Israeli player to ever set foot on an Emirati soccer field. The deal was made possible largely by the normalization agreement signed this month between Israel and the United Arab Emirates.

Saba made his first breakthrough while playing for the Maccabee Netanya soccer club. He ended the season as the Israeli Super League’s top scorer with 24 goals. The achievement earned him a place on what was then Israel’s champion team, HaPoel Beersheba. Just a few months later, he was acquired by Guangzhou R&F for $5 million. After two years there, he left the club this week and signed with Al-Nasr Dubai.

“I just hope that I am not dreaming, and that all of a sudden, I will wake up,” he wrote in an Instagram post after signing with Al-Nasr. “People here are constantly saying that this is historic. Just moments after the peace agreement, the mood in the streets and in the club is warm and inviting.”

Saba's cousin Ahmad Saba was, like him, the top goal-scorer for Israel’s Super League in the 2011-2012 season, also playing for Maccabee Netanya. In a conversation with Al-Monitor, he said, “I think this is a wonderful and important step for Dia, for all of Arab society and especially for Arab football players in Israel, because it opened the door for them to join the Emirati league in the future. It really is an enormous achievement for Dia to become the first Arab-Israeli to sign with the Emirati league.”

Former soccer star Hamoudi Kayal is the uncle of the Israeli national team's Beram Kayal, who also played for several clubs in the English and Scottish leagues and is now being eyed with interest by several UAE teams. Kayal said that he “wishes the best of luck to Saba with Al-Nasr Dubai," adding, "I am sure that he will do a great job there and help the team by scoring many goals. I congratulate everyone on this step forward and hope that it paves the way for Arab football players in Israel by opening a new market to them with the various leagues of the United Arab Emirates and other Arab states.”

The historic deal undoubtedly has value far beyond the soccer field. Saba's signing by the Emiratis offers an opportunity to build ties with the Arab world that was long denied to Arab-Israelis because of their citizenship.

“Now [Arab-Israelis] have a new chance. They must not let it get away,” said Ehab Jabareen of Mask Media for Crisis Management. He told Al-Monitor, “The indecisiveness surrounding the dialogue about citizenship on one hand and nationalism on the other creates a lot of confusion, which, in turn, has left us [Israeli-Arabs] to live on the margins. Now we have a chance to become a major factor in Israel’s relations with the Arab states. Saba's step could become a catalyst for further representation for us and for greater awareness of our existence among the Gulf states."

Jabareen explained, "Right now, the average citizen of the Gulf states knows very little about us, the Arab citizens of Israel. If Dia succeeds in leaving his mark, he could put us on the map. True, he is an Israeli player, but it is important to remember that he is an Arab player, not a Jewish player, so his success could offer enormous exposure to our society. It could turn him into a goodwill ambassador and the point of contact between us and the Gulf states. This could, in turn, find expression in business as well, by opening new markets to us in the future.”

Hamed al-Hashemi, a poet from Abu Dhabi, told Al-Monitor, “It disturbs me to think that the gates of the Arab world were closed to Israel’s Arab citizens. It is patently unfair to deny them access to the Arab world and to keep them from visiting Arab states, which are part of their homeland. The Emiratis regard this agreement as an initiative that will bring peace to the entire region. We are proud that the UAE led this move.”

Hashemi went on, “Football is a very popular game. Cooperation is very important and helpful to all sides. From my perspective, the participation of an Israeli player in the Emirati league could be like the first rain, foretelling good things. Similarly, we hope to see an Emirati football player playing for one of the teams in the Israeli league.”