Prime Minister Benjamin Netanyahu is eager to expand normalization beyond Bahrain and the United Arab Emirates, but many Israeli Arabs would prefer that normalization begin at home. 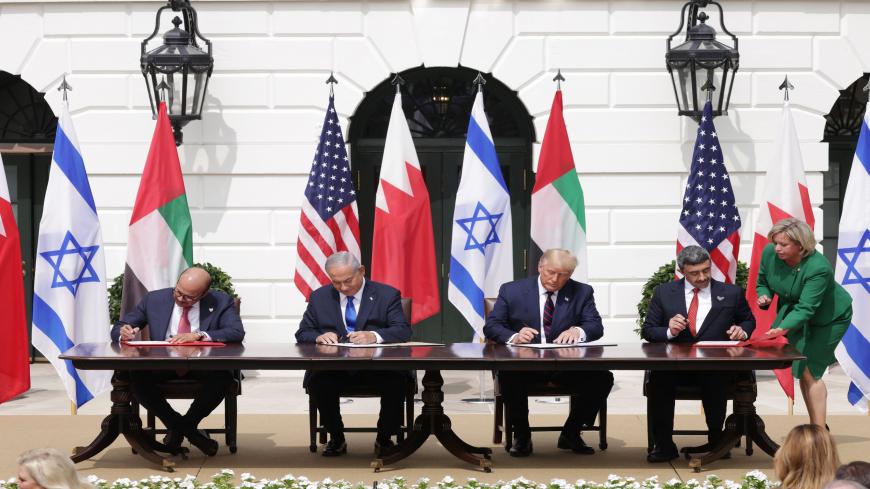 “As-salaam aleikum.” That’s how Prime Minister Benjamin Netanyahu chose to begin his Sept. 15 message. He continued, “to all of Israel’s friends in the Middle East: those who are with us today, and those who will join us tomorrow.”

Netanyahu delivered this speech at the ceremony to mark the signing of the Abraham Accords with the United Arab Emirates (UAE) and Bahrain on the South Lawn of the White House. He later tweeted that part of the speech in Arabic to all his Twitter followers around the world. Yes, in Arabic! The very language that, just two years ago, saw itself demoted by Netanyahu himself, from Israel’s second official language to a language with “special status,” to use the term as it appears in the new law.

The truth is that anyone who has followed Netanyahu’s remarks ever since he announced the normalization agreement between Israel and the UAE will find a man who speaks positively about the Arabs and talks about the need to turn the page on Israel’s relationship with the Arab world. He keeps using the Arabic word salaam, which is very much unlike him. After all, he based his whole career on incitement against Israel’s Arab population.

In fact, Netanyahu’s resume is replete with all sorts of racist comments targeting Israeli Arabs. In the second round of elections last year, Netanyahu wrote in an automated popup Facebook message to his followers, “Arabs want to annihilate us all: women, children, and men.” The incident, which soon came to be known as “the chatbot of hate,” caused Facebook to announce that it was suspending his account for 24 hours. Then there was his miserable comment last March, in response to the election results, that the left-wing bloc has only 47 seats, and that the Arabs are not part of the equation. All of this happened after another famous statement during the 2015 election: “The government of the right is at risk. Arab voters are heading to the polling stations in droves.” And there were more. In fact, there have been all sorts of attacks and attempts to delegitimize Israel’s Arab citizens.

One person who noticed Netanyahu’s double standard was Knesset member and Joint List senior Ahmad Tibi. This week, he tweeted, “I suggest that Netanyahu make peace with 20% of the country’s population first — its Arab citizens.” In a conversation with Al-Monitor, the chairman of the Joint List Knesset faction added, “Instead of making what Netanyahu calls ‘peace’ with the Gulf states, Sudan and Mauritania, he would do better to look inward and make real peace and a social contract between the state and 20% of its population. Most of all, it is worth his while to stop inciting against this [Israeli-Arab] population. There is only one way to do this, and that is by adopting a Basic Law on Equality, which will state that all citizens are equal. But Netanyahu should take the first step by stopping the incitement and discrimination against the [Israeli] Arab public.”

This leaves the inevitable question: How do Netanyahu’s statements of the last month, with their incessant embrace of the Arab world, fit in with his earlier, anti-Arab statements? Are we seeing the emergence of a new Netanyahu? Or does English-speaking Netanyahu, who talks about democracy and peace, change his tune when he switches to Hebrew and describes his own Arab citizens as lepers and pariahs?

In these recent weeks, Netanyahu seems to be playing a game of interests. This was particularly apparent in the story of Yakub Abu al-Kiyan of Umm al-Hiran. Abu al-Kiyan was described as the terrorist behind a car attack in January 2017, only to be exonerated last week, three years after he died. Only just now Netanyahu thought it was the right time to apologize to Abu al-Kiyan’s family — after he realized that it would bolster his attacks on the State Attorney General’s Office.

In a conversation with Al-Monitor, influential media personality Lucy Aharish said, “There is no doubt that it is a historic day, when Israel normalizes its relations with Arab states in the region. It’s a welcome event, and Netanyahu deserves all due credit for it.” She added, “However, at the same time, it is impossible to ignore the hypocrisy in the air. This is the same prime minister who did not stop inciting against his Arab citizens over the last few years, in what seemed like a well-orchestrated campaign. He fanned the flames of hatred and used his comments to intensify the rift between Israel’s Arab and Jewish citizens."

She noted, ‘’It’s one thing if it comes from Netanyahu, but he is surrounded by an entire chorus that supports him and trumpets his messages. The far right joined the racist celebration in the last few years, with racist statements taken from darker days. But these [statements] did not merit even half a condemnation from the prime minister himself. It is the same right wing that celebrates peace with the Arabs from outside the country, while chanting ‘Death to the Arabs’ here at home. I am waiting for the next election campaign, in which Netanyahu will surely use Israeli Arab citizens again as an electoral weapon. For him, this [attacking Israeli Arabs] would be a legitimate means of winning the election. I’d like to see how he justifies such remarks to the Emirates.”

What does shine light on the situation is the composition of the Israeli delegation that flew to Abu Dhabi last month. Despite all the talk about normalization and peace, it was hard to miss the fact that there were no Arab participants, either as journalists or official representatives. It reflects the general attitude in Israel. The country may be home to almost 2 million Arab citizens, but they are not really part of the game. In other words, it looks like Netanyahu and his supporters prefer Arabs who live far away and not Arabs who live right next to them in the same country.

So, should Israel start to normalize relations with its Arab citizens? Imagine a situation in which there was an Arab representative on the delegation, or an Arab minister who met with his UAE counterpart in a meeting conducted entirely in Arabic.

Eyal Hadid, host of a popular radio show on Israel’s Radio al-Shams, told Al-Monitor, “The new agreement gives Netanyahu a chance to highlight ‘good Arabs,’ who have no demands, unlike the Palestinians. Israel’s Arab citizens will soon return to their historic role of going to vote ‘in droves’ as soon as Netanyahu needs to consolidate his block, and bypass [Yisrael Beitenu leader] Avigdor Liberman and [Yamina leader] Naftali Bennett on the right.”