Israel’s Gulf diplomacy and its discontents

As Israel and its new regional partners begin trade talks, Palestinians, Israeli Arabs and the Israeli left are on the sidelines. 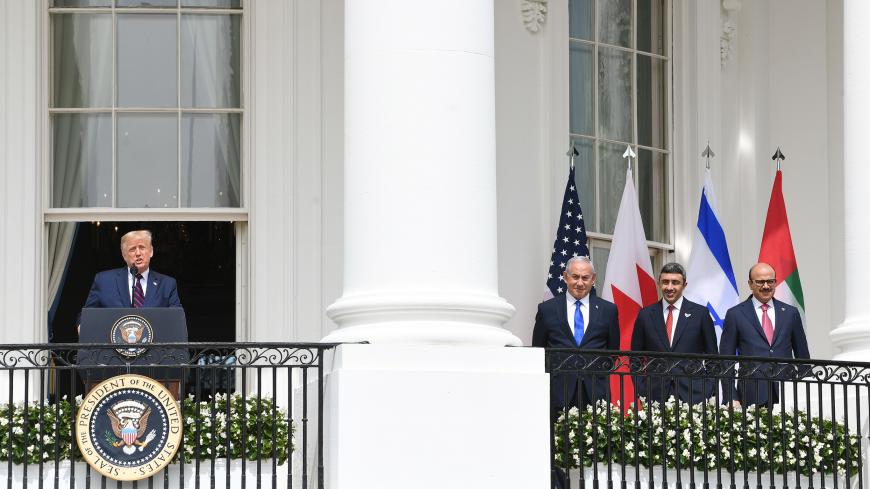 (L-R) US President Donald Trump speaks as Israeli Prime Minister Benjamin Netanyahu, UAE Foreign Minister Abdullah bin Zayed Al-Nahyan and Bahrain Foreign Minister Abdullatif al-Zayani listen before they participate in the signing of the Abraham Accords under which Bahrain and the United Arab Emirates recognize Israel, on the South Lawn of the White House in Washington, Sept. 15, 2020. - SAUL LOEB/AFP via Getty Images

Israel may get even more than it bargained for, at least economically, as a result of the recent normalization agreements with Bahrain and the United Arab Emirates.

“In many of the sectors in which Israel historically has expertise, the Gulf states have already made significant inroads,” writes Karen Young of the American Enterprise Institute, “so much that the Gulf may be a source of innovation and new business for Israel.”

These sectors include agribusiness, food security, retail, and housing. In addition, Dubai-based DP World and Israel’s DoverTower have agreed to “assess the possibility of a direct trading route between Eilat on Israel’s Red Sea coast and Jebel Ali in Dubai.” DP World added that it will “set up a joint venture with the shipbuilding company Israel Shipyards Ltd.,” as we report here.

With regard to agribusiness, Gulf investment could counter that of China, which has already bought up much of the Israeli sector.

With regard to tourism, Danny Zaken reports how Emirati hotels and airlines are already in touch with Israel about how to keep kosher in anticipation of Israeli visitors.

Palestinians, who are dismayed by the agreements (see below), may also benefit from the so-called Abraham Accords. UAE Minister of Economy Abdullah bin Touq Al Marri told the Atlantic Council that economic development in the West Bank is also part of the agenda in consultations with Israel.

"The agreements signed in Washington are particular in their exclusion of Palestinian statehood and any commitments toward investment in or promotion of Palestinian interests," Young writes, adding, "For Gulf real estate developers, there could be some obvious opportunities in the future.” This was a reference to the Qatar Investment Authority’s stake in the planned city of Rawabi in the West Bank.

Diamonds — and soccer — are forever, or at least a start

Israelis and Emiratis share a love of diamonds and soccer, so it perhaps is no surprise that there are already deals in the works.

The Israel and UAE diamond exchanges signed a collaborative agreement less than 48 hours after the White House signing ceremony, agreeing to set up offices in each other’s country, as we report here.

“Anyone looking for hard evidence that the normalization agreement between Israel and the United Arab Emirates (UAE) is real, and not some cold, technical deal, like Israel has with Egypt and Jordan, need look no further than — soccer,” writes Zaken.

An Emirati investor has approached the owner of Beitar Jerusalem as a potential ownership partner. Hard-line Beitar fans in the past have harassed the team’s Muslim players and vandalized the club’s office for adding them to the team. Nonetheless, the Emirati investor reportedly saw the team’s checkered experience as an incentive to reveal the Emirate’s intention for peaceful coexistence, reports Zaken.

For Israel’s Arab citizens, the normalization agreements are both opportunity and bitter reminder of their marginalized status in Israeli politics and society.

Israel’s Arabs number close to 2 million out of Israel’s overall population of 8.6 million (excluding about 4 million Palestinians in the West Bank and Gaza), and the Arab Joint List holds 15 seats (the most ever) in the Israeli parliament (or Knesset, which has 120 members).

With regard to the opportunities, Afif Abu Much says in an Al-Monitor podcast that the accords will allow Israel’s Arabs to travel and do business in the Gulf, which until now they have not been able to do, traveling on an Israel passport. Knowing the Arabic language and culture, Abu Much says, could allow Israel’s Arab communities could even be door openers in these new relationships.

On the downside, Israeli Prime Minister Benjamin Netanyahu, who now likes to say "salaam" a lot and who can’t wait for the next normalization deal, has a record "replete with all sorts of racist comments targeting Israeli Arabs," writes Abu Much. For example, "in the second round of elections last year, Netanyahu wrote in an automated popup Facebook message to his followers, 'Arabs want to annihilate us all: women, children, and men.' The incident, which soon came to be known as 'the chatbot of hate,' caused Facebook to announce that it was suspending his account for 24 hours.”

Israel "may be home to almost 2 million Arab citizens," Abu Much concludes, "but they are not really part of the game. In other words, it looks like Netanyahu and his supporters prefer Arabs who live far away and not Arabs who live right next to them in the same country."

The reaction to the normalization agreements in the Palestinian territories of the West Bank and Gaza has been uniformly negative, and even more so when it appeared that US Ambassador to Israel David Friedman said the United States might consider "appointing" exiled Palestinian Fatah leader Mohammed Dahlan to replace current President Mahmoud Abbas (Friedman later said he misspoke).

Dahlan held senior positions in the Palestinian Authority in the 1990s but soon clashed with its leadership over allegations of mismanagement, corruption, losing Gaza to Hamas, and poisoning PLO Chairman Yasser Arafat, who died in 2004. For the past decade Dahlan has lived in Abu Dhabi, serving as an adviser to Crown Prince Mohammed bin Zayed Al-Nahyan.

“It may be argued that the popular support that has emerged for Abbas will be short lived, but the reality is that Palestinians are enjoying a rare atmosphere of national unity,” writes Daoud Kuttab. "Both Palestine Liberation Organization and Islamic leaders are burying the hatchet to consolidate peace, willing to put aside their differences in the face of an existential threat."

"While Abbas is enjoying the decimation of all his political rivals, the public is still skeptical about his leadership and strategy," Kuttab adds. "The current plans to redouble efforts on the popular resistance level have failed to take hold. While Palestinians leaders are still driving their fancy cars and living in comfort the Palestinian population is suffering and government employees have not been receiving their salaries."

For decades, it was the Israeli left that was home to the peacemakers. Not anymore.

“The political left and center have been caught at a disadvantage” by the Abraham Accords, writes Mazal Mualem. “After holding a decades-long monopoly on peace, a despised right-wing leader under criminal indictment has broken through to much of the Arab world. The confusion and embarrassment on the Israeli left will supply fodder for historians.”

“Netanyahu signed an agreement that does not end war,” writes Ben Caspit, “but also does not entail territorial concessions, maintaining his peacemaker image without undermining the right-wing rhetoric that keeps his electoral base loyal. Netanyahu, unlike most people, manages to have a cake and eat it, too.”

Not so many years ago it was Turkey that reaped the benefits, including in Europe and Washington, of being Israel’s major Muslim partner. So much for that, as Turkish President Recep Tayyip Erdogan has hosted Hamas leaders and picked up the Palestinian cause as a staple of his often fiery rhetoric, all the while maintaining flights and ties with Israel.

“In hindsight,” writes Amberin Zaman, “Erdogan’s determined political break with Israel — starting with his dressing down of the late Israeli President Shimon Peres in Davos over Israeli atrocities in Gaza and accelerated by the Mavi Marmara showdown — may well have presaged Turkey’s gradual unmooring from traditional partnerships with its Western allies.”