Why UAE’s landmark deal with Israel is bad for Turkey

Washington's doors are closing to Turkey while those same doors are being opened to Gulf monarchies. 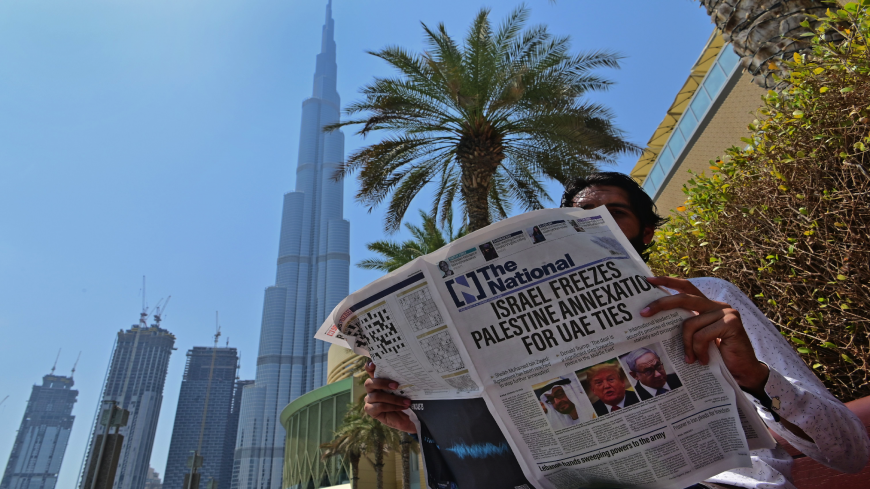 A man reads a copy of UAE-based The National newspaper near the Burj Khalifa, the tallest structure and building in the world since 2009, in the Gulf emirate of Dubai on Aug. 14, 2020, as the publication's headline reflects the previous day's news as Israel and the UAE agreed to normalize relations in a landmark US-brokered deal. The Palestinian leadership voiced its "strong rejection and condemnation" of the deal and announced it would withdraw its envoy from the UAE, and Turkey also condemned the deal as an act of treachery. - GIUSEPPE CACACE/AFP via Getty Images

As the historic agreements between Israel, the United Arab Emirates (UAE) and Bahrain continue to reverberate across the globe, the reaction from Turkey, the first majority Muslim country to recognize the Jewish state, has triggered a mix of mockery and disbelief.

When news broke in late August that the UAE was normalizing ties with Israel, Turkey’s President Recep Tayyip Erdogan said Ankara might suspend its own ties with Abu Dhabi “because we side with the Palestinian people.” Last week, when Bahrain declared it was following suit, Turkey charged this would “further encourage Israel to continue illegitimate practices toward Palestine and its efforts to make the occupation of Palestinian lands permanent.” It then protested Morocco’s decision to open its airspace to civilian flights to Israel.

“Turkey’s own flag carrier, Turkish airlines, makes 14 flights a day to Israel,” observed Namik Tan, a former Turkish ambassador to the United States and Israel. The statements are “nothing less than laughable,” the former envoy said.

Turkey’s President Recep Tayyip Erdogan’s anti-Israel tirades have made him a hero among Palestinians, but it’s done little to serve Turkey’s national interests. Friendship with Israel had, on the other hand, served Ankara royally. Tight military and intelligence cooperation between the two countries, which peaked in the 1990s with Israeli air force pilots training over Turkish skies, allowed both countries to project power across the region. In Western capitals, it helped Ankara sustain its strategic currency beyond the Cold War. In Washington, being Israel’s closest Muslim ally ensured bipartisan support in beating back the powerful Greek and Armenian lobbies on the one hand while averting potential sanctions over its dismal human rights record on the other.

Today, the United Arab Emirates has succeeded, with much help from Erdogan, in stripping Turkey of its niche status. Rubbing salt in Turkey’s wounds, the tiny Gulf nation is getting state-of-the-art, US-made F-35 fighter jets as its ruthless repression of domestic dissent gets swept under the carpet. Turkey has been kicked out of the F-35 consortium and will no longer be getting the planes it helped produce. This is because it refused to scrap its deal with Russia for S-400 missiles that are designed to shoot the US aircraft down.

“From the point of view of mainstream US policymakers, Erdogan's hostility toward Israel and outreach to Hamas appears to be ideologically motivated and an extension of a broader Islamist, disruptive agenda in the Middle East,” noted Merve Tahiroglu, Turkey program coordinator at the Project on Middle East Democracy, a think tank in Washington. “Its overall impact on the United States has been to magnify Turkey's policies toward the rest of the region and evaluate those moves as part of a broader, strategic Turkish reorientation under Erdogan,” she told Al-Monitor.

“Turkey is a treaty ally to the United States, so it is supposed to be closer than any of the Gulf monarchies. But what is happening in effect is that Washington's doors are closed to Turkey, while the same doors are being opened to the Gulf monarchies,” said Selim Koru, an expert at the Economic Policy Research Foundation in Ankara.

A common fear of Iran is widely seen as the main driver of Israeli and Gulf rapprochement. But Turkey’s unabashed mentoring of Hamas and fellow Muslim Brotherhood entities alongside its increasingly aggressive posturing in Syria, Libya and the Eastern Mediterranean are cited as a further reason. This is probably an exaggeration, and Israeli officials emphasize in private that the deal is not “against Turkey.” Yet Turkey is simultaneously at odds with its NATO allies the United States, France and Greece, as it is with governments in Egypt, Iraq, Syria and most of the Gulf nations. Its sole regional friend is Qatar, who is keen to not alienate Israel. Iran remains neither ally nor foe.

Increasingly isolated, its economy on the ropes and its democracy in shreds, Turkey is no longer “the beacon that inspired millions of Muslims,” lamented a former Turkish diplomat who spoke on condition that he not be identified by name. In hindsight, Erdogan’s determined political break with Israel — starting with his dressing down of the late Israeli President Shimon Peres in Davos over Israeli atrocities in Gaza and accelerated by the Mavi Marmara showdown — may well have presaged Turkey’s gradual unmooring from traditional partnerships with its Western allies.

However, Israel’s behavior under its veteran prime minister, Benjamin Netanyahu, has also changed, Koru argued. “Turkey and Israel were both market-based economies, roughly rules-based when it came to international conduct,” he said. “That has changed more for Turkey than for Israel, but it changed for both, I think. They’re both more political than they used to be.”

Israeli sources contend, however, that while Turkey remains undeniably influential, it’s on the wrong side of history. “The Abraham Accords have changed the whole paradigm of peacemaking in the Middle East,” said a well-placed Israeli source who closely follows Turkey. “Turkey could have been the one helping to broker [the accords], but it’s aligned with Iran and Hamas.”

Might Turkey reverse course? “RTE doesn’t have it in his DNA,” the source insisted, using Erdogan’s initials. “What is left for RTE is to try to sabotage the deal.”

In 2009, former Turkish President Abdullah Gul went to Syria and said it was Turkey’s gate to the Middle East. “Today, Turkey’s sole gateway to the Middle East is through the port of Haifa,” the Israeli source, who spoke to Al-Monitor on condition of anonymity, asserted. He was alluding to trade between the two countries, which paradoxically has continued to expand even after Turkey asked Israel’s ambassador to leave Ankara in 2018 over further carnage in Gaza and something President Donald Trump did — that is, move the US Embassy to Jerusalem.

But things may be changing on the economic front as well. Gallia Lindenstrauss, a senior research fellow at the Tel Aviv-based Institute for National Security Studies who specializes in Turkish foreign policy, said, “The [commercial] opportunities that are now opening for Israel in the Gulf will influence also Israel's trade relations and aviation connections with Turkey and are likely to cause a decrease in the phenomenal numbers we saw in 2019 — both in terms of the number of Israeli [transit] passengers going through Turkey and the record-high trade volume.”

“Of course we will be able to judge the true influence of the Abraham Accords in this respect only after the COVID-19 pandemic will be contained. But it is already clear that there will be an economic impact to this shift of Israel toward the Gulf states,” said Lindenstrauss.

The question of whether Turkey will continue to lead “an independent Muslim Brotherhood axis” or whether it will grow closer to Iran’s “axis of resistance” is still an open one, Lindenstrauss remarked. Either way, “It would be in the interest of Israel and the Gulf states to keep the degree of animosity at a level that will not push Turkey toward Iran” beyond their existing cooperation,” Lindenstrauss concluded.