US, UAE press ahead to broker Israel-Sudan rapprochement

Sudan might be ready to establish ties with Israel, but first it needs for the United States to remove it from the list of countries sponsoring terrorism. 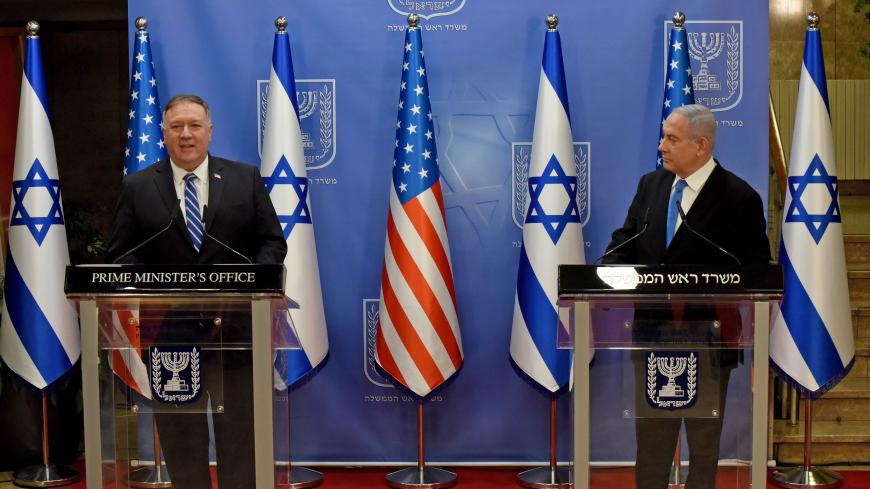 US Secretary of State Mike Pompeo (L) and Israeli Prime Minister Benjamin Netanyahu make a joint statement to the press after meeting to discuss normalizing ties with the United Arab Emirates and other Arab states, Jerusalem, Aug. 24, 2020. - DEBBIE HILL/AFP via Getty Images

Three Sudanese parties held a joint conference in Khartoum Sept. 30, calling on the regime to accept an American deal for normalizing ties with Israel. "The American proposal is limited to the upcoming US presidential elections [on Nov. 3], and we shouldn't miss this historic opportunity. After announcement of the results of the US presidential elections, we will enter into a major crisis in Sudan if we don’t agree to the offer made in the Emirates. Sudan will not be removed from the terrorism list for many years if we don’t take advantage of the existing opportunity,” said Mubarak al-Fadel, head of the Umma party.

For Jerusalem, the joint press conference reinforced impressions over Khartoum’s willingness to close a deal soon. A senior Israeli diplomat told Al-Monitor that the ball is now in Sudan’s court. Khartoum must now decide whether or not to accept the proposal made by American officials in Abu Dhabi some 10 days ago for a quadruple package deal.

The deal in the works is far from simple: Israel will achieve ties with a strategically important African country on the shores of the Red Sea; the United States will get a reinforced transitional regime in a country emerging from years of dictatorship; Sudan will be erased from the list of countries sponsoring terrorism and will also receive generous financial aid; and the United Arab Emirates (UAE) will receive diplomatic glory over mediating such a deal, along with a hefty bill to pay.

For many years, Sudan considered itself at war with Israel, though it did not participate in the 1973 Yom Kippur War. Also, for almost three decades and under former President Omar al-Bashir, the country nurtured ties with Iran and championed the Palestinian cause. But after the 2015 severing of ties with Iran, and especially after the toppling of Bashir in April 2019, the diplomatic discourse in Khartoum changed. Sudan has not decided yet publicly on renewing ties, but all signs indicate it is well on the road for such a move.

On Feb. 3, Israeli Prime minister Benjamin Netanyahu secretly met in Uganda with head of Sudan’s Sovereign Council Gen. Abdel Fattah al-Burhan. After the encounter, Netanyahu went public and announced that the two enemy countries agreed to work together toward normalizing ties. Since then, Sudanese officials have expressed contradicting views over establishing ties with Israel. Sudan is now governed by a transitional Cabinet composed of military officers and civilians, and it seems that the Sudanese army is the one pushing Khartoum to renew ties with Jerusalem. The civil leadership fears that the Sudanese people will refuse to accept such a move, especially some extremist Islamist factions that were pushed aside after the fall of Bashir. Generating public anger in this transition period is the last thing the government now needs.

An Israeli expert on Africa told Al-Monitor that the civil leadership in Sudan has a hard time accepting renewal of ties with Israel, mostly because of the Palestinian issue. It would rather seperate the issue of removal from the terrorism-sponsoring list and ties with the Jewish state. But even the civil leadership seems to be coming around now. "Unlike the Sudanese army it is not necessarily attracted by Israel’s military capabilities or the possibility of security cooperation," said the expert, who spoke on condition of anonymity.

As aforementioned, at stake is the removal of Sudan from the list of countries sponsoring terrorism, which is the first and necessary step before Sudan’s economic recovery. In other words, for the Sudanese civil leadership the question is less of establishing ties with Israel, and more the issue of pleasing the United States. Only the United States — with the help of Gulf countries — could extract Sudan from the economic crisis it suffers from.

Addressing the UN General Assembly Sept. 26, Sudan’s Prime Minister Abdalla Hamdok referred to this precise issue. "Our prime concern is to obtain debt forgiveness and differential treatment. This is part of the work of our friends at the conference in Berlin. Also, Sudan's name should be removed from the list of countries that are sponsoring terrorism. … We hail the efforts of the US government and US Congress to remove Sudan’s name from the list of countries sponsoring terrorism," he said.

Jerusalem is well aware of the diverging opinions within the Sudanese leadership over establishing diplomatic relations, which is why it has kept a rather low profile on the issue in recent weeks. It is letting Washington do the heavy lifting. Contrary to the UAE, Israel does not expect a flux of commercial ties if and when ties are established with Sudan, nor a great enthusiasm in the streets of Khartoum. Israeli tourists are not expected to flock to Sudan (as they dream to fly to Dubai), even if a normalization agreement is signed, though many Israelis are curious to hear and to learn more about this huge country, considered an enemy until not long ago.

Still, Israelis were surprised to hear in the press about the soon expected inauguration of the “Sudanese-Israeli Friendship Association." A report even claimed that thousands of Sudanese expressed interest in joining the association. A similar association has not yet been established in Israel.

On the morning of Oct. 1, UAE Ambassador to the US Yousef Al-Otaiba put a damper on hopes for an Israeli normalization deal with either Sudan or Oman. On Sudan, Otaiba estimated it intends to demand a higher price of the United States — much more financial aid then what was proposed in the Abu Dhabi meeting.