Israel, Sudan confirm they are in talks toward peace agreement

Senior figures in Sudan and Israel confirmed today that both countries are advancing toward a peace agreement, perhaps even by the beginning of 2021. 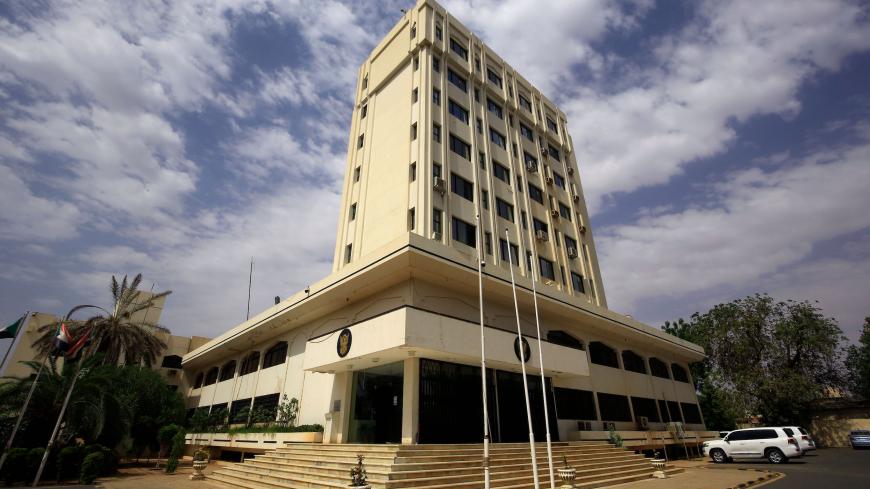 The Ministry of Foreign Affairs building is pictured in the Sudanese capital Khartoum, on June 23, 2020. - ASHRAF SHAZLY/AFP via Getty Images

Sudan Foreign Ministry spokesperson Haidar Badawi Sadiq today told Sky News in Arabic that Khartoum is conducting talks with Jerusalem, stating that Sudan “aspires toward a peace agreement with Israel … a relationship of equals built upon Khartoum’s interests.” Sadiq noted that both countries "will gain from a peace agreement," adding, "We look at an agreement of this kind through the interests of Sudan without sacrificing our values and principles." Sadiq also hailed the Israel-United Arab Emirates (UAE) agreement as “courageous.”

The Aug. 13 announcement on Israel and UAE normalizing relations generated a swirl of rumors, with the Israeli press busy guessing which Arab/Muslim country would be next in line for renewal or establishment of ties. Sudanese and Israeli officials hinted that both countries are viewing a similar rapprochement. On Aug. 16, Israel's Intelligence Minister Eli Cohen said Bahrain and Oman could soon follow the UAE in recognizing the State of Israel, adding, "In my assessment, there is a chance that already in the coming year there will be a peace deal with additional countries in Africa, chief among them Sudan." The statement today by Khartoum pushes Sudan to the top of the rapprochement list.

Senior Israeli officials were quick to react to Sadiq’s statement. Foreign Minister Gabi Ashkenazi tweeted, "The announcement by the Sudanese Ministry of Foreign Affairs highlights the fundamental change that is taking place in the Middle East in general, and in Sudan in particular, 53 years after the Khartoum Conference in which Sudan called for no recognition of the State of Israel." In a second tweet, Ashkenazi emphasized that "Israel’s diplomatic activity led by the Ministry of Foreign Affairs, continues to create further important opportunities such as the connections between Israel and Sudan."

Prime Minister Benjamin Netanyahu also responded quickly, saying, “Israel, Sudan and the entire region will benefit from the peace agreement, and together they can build a better future for all the peoples of the region. We will do everything necessary to make this vision a reality.”

Sudan served in the past as a route for Iran to smuggle weapons into the Gaza Strip. In 2012, Sudan blamed Israel for a blast in a Khartoum military factory. But those were the days of toppled President Omar al-Bashir, and Sudan is a different country now on many levels.

Last February, while visiting Uganda, Netanyahu met secretly with the head of the Sudanese Sovereignty Council, Gen. Abdel Fatah al-Burhan. The meeting was reported only after it took place. Still, the fact that Netanyahu met with an army man and not with the civil prime minister raised some eyebrows in the international community over Khartoum’s motivation for rapprochement with Israel. Assessments back then said Khartoum is mainly interested in Israeli military and intelligence capabilities.

Sudan is still listed by the United States as a country that sponsors terrorism. As such, it is subjected to different sanctions. Haim Koren of the Herzliya Interdisciplinary Center, who served as ambassador to Egypt and as Israel’s first ambassador to South Sudan, told Al-Monitor Khartoum has been working on ties with Israel for quite a while. "The Sudanese are interested in getting out of the list of countries supporting terrorism. They have been discussing this for a long time both with us, Israel and with US Secretary of State Mike Pompeo," says Koren. An expert on the region, Koren says Khartoum is interested in development programs in smart agriculture and water management, among other projects of the kind that Israel excels in and is operating in other African countries. "More so, they are interested in gaining legitimacy vis-a-vis the West. They want to join the camp of the ‘good guys,'" says Koren.

Yet for the moment it seems that Sudan prefers to remain prudent. Just a few hours after the publication of the interview with Sadiq, and following large public exposure, Sudan’s acting Foreign Minister Omar Qamar al-Din Ismail denied that Khartoum was negotiating an agreement with Israel, and stated that the Sudanese government was “surprised” by the claim by his spokesman. Nevertheless, Sudanese sources told the press that mediated deliberations between Jerusalem and Khartoum have been going on for months now.  An Israeli diplomatic expert confirmed that to Al-Monitor.

Editors' note: Aug. 18, 2020. This article has been updated since its initial publication.