Sudan's leaders anticipate economic benefits from the agreement, which is opposed by opposition parties. 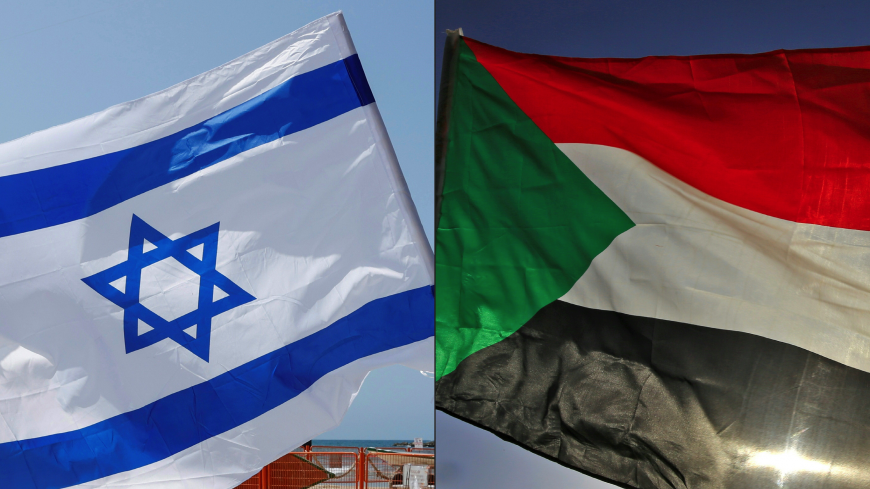 This combination of pictures created on Oct. 23, 2020, shows (L to R) an Israeli flag during a rally in the coastal city of Tel Aviv on Sept. 19, 2020, and a Sudanese flag during a gathering east of the capital, Khartoum, on June 3, 2020. Sudan and Israel agreed Oct. 23 to normalize relations. - JACK GUEZ,ASHRAF SHAZLY/AFP via Getty Images

Sudan’s Council of Ministers released a statement on Sunday about the country’s moves to normalize relations with Israel, the interim body’s first acknowledgment since US President Donald Trump announced on Friday that Sudan would be the latest country in the region to recognize the Jewish state.

The statement was careful to emphasize the economic benefits that would come to Sudan as a result of the Trump administration removing Khartoum from the US state sponsors of terror list.

It also reiterated that Prime Minister Abdalla Hamdok requested the US administration decouple the two processes and that full normalization — though agreed to in principle during a three-way phone call between the leaders on Friday — will require approval by a legislative council that has yet to be formed.

Despite an agreement in principle reached months earlier on de-listing Sudan, Secretary of State Mike Pompeo raised a new request during a trip to Khartoum in August: that Sudan recognize Israel. Hamdok demurred, but negotiations continued.

“What is our problem with Israel? We’re not the first country to normalize,” Hamedti said, according to Al-Arabiyya. “The Palestinians normalized and they have a relationship with it.”

Why it matters:  Sudan’s unelected interim leaders are walking a political tightrope in the hope of obtaining desperately needed economic aid and international support.

Dozens of protesters objected to the normalization plan in Khartoum on Friday. The head of Sudan's National Umma Party, former Prime Minister Sadiq al-Mahdi, and the country’s Popular Congress Party slammed the proposal. The Sudanese Baath Party also came out against the move.

Recognizing Israel is a sensitive issue in Sudan, which played an important role in Arab national resistance to normalization with the Jewish state in the latter half of the 20th century.

Sudan’s interim government was installed last year after popular protests led to the overthrow of long-time dictator Omar al-Bashir. If the Sudanese public perceives that the new government has been strong-armed into ties with Israel, it could fuel more instability, potentially risking the country’s transition to democracy, experts have warned.

Trump is seeking a pre-election political win, and both the United States and Israel have an interest in bringing Sudan into their security orbit in the Middle East. Long allied with Iran, Sudan was once a conduit for weapons to Hamas.

Sudan has agreed to designate Hezbollah a terror organization amid the US-led normalization push.

What’s next:  Sudan’s interim leaders are betting that if they tread carefully, the benefits may outweigh the risks in the eyes of the public. Bashir left Sudan more than $60 billion in debt, and removal from the terror sponsors list will ease Khartoum’s access to foreign investment and support.

And although modest in light of Khartoum’s needs, aid packages are already on the way. The Abu Dhabi Fund for Development has readied a $556 million aid package for Sudan, with the rest of a $1.5 billion grant pledged last year yet to come, according to Al-Arabiya.

The US State Department announced $81 million in humanitarian aid to Sudan on Saturday. Israel is also readying $5 million in wheat for Sudan.

Bahrain, the United Arab Emirates and a number of Western countries have already praised the agreement.

Know more:  Rina Bassist takes a look at what normalization of relations with Sudan would mean for Israelis at a time when both countries are facing their own internal problems.