Sudan to recognize Israel after US rescinds Khartoum’s terror designation 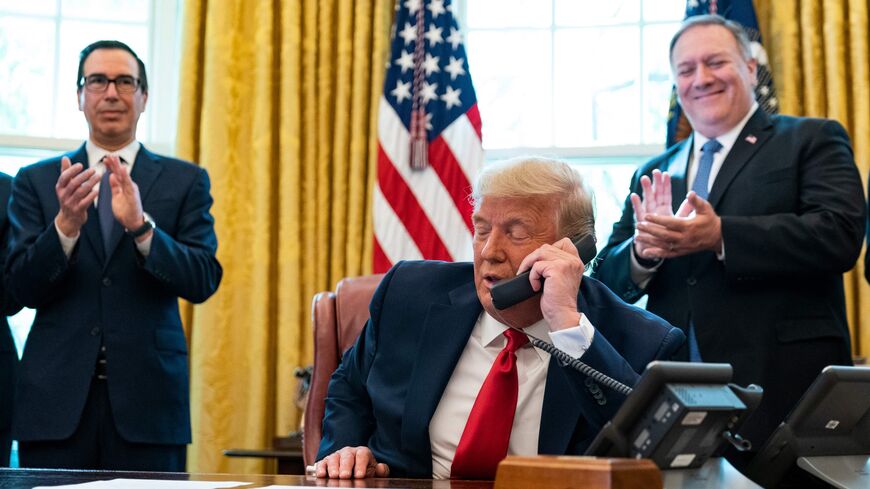 US President Donald Trump speaks to the leaders of Sudan and Israel as he announces that Sudan will normalize relations with Israel at the White House in Washington, on Oct. 23, 2020. Behind him are Treasury Secretary Steven Mnuchin (L) and Secretary of State Mike Pompeo (R).

Sudan has agreed to recognize Israel, President Donald Trump announced Friday, just after the White House said it had notified Congress that it removed Khartoum from the state sponsors of terrorism list.

Trump made the announcement to reporters during a conference call with Israeli Prime Minister Benjamin Netanyahu, Sudanese Prime Minister Abdalla Hamdok, and the head of Sudan's transitional council, Gen. Abdel Fattah al-Burhan, in the Oval Office on Friday. Israeli Defense Minister Benny Gantz — who also carries the title of alternate prime minister — was not included in the conference call.

Sudan's government has not yet made any announcement confirming it has agreed to recognize Israel.

A joint statement said the two had agreed to develop economic and trade relations, with an emphasis on agriculture, as well as to focus on aviation and immigration — a sensitive issue due to the thousands of Darfur refugees facing deportation from Israel.

Israeli and Sudanese officials are expected to meet in the coming weeks to finalize the normalization agreement. A signing ceremony is also expected at the White House.

Sudan is the third country to normalize ties with Israel amid an initiative the White House is calling the Abraham Accords. In August, the United Arab Emirates became the first Arab country to recognize Israel since Jordan in 1994. Bahrain followed the UAE in September.

The announcement comes after a last-minute White House push to leverage Sudan’s long-planned removal from the terror list to convince senior officials in Khartoum to recognize Israel ahead of the 2020 US presidential elections.

US Secretary of State Mike Pompeo raised the proposal during a trip to Khartoum in August, even though recognizing Israel had not been part of a previous understanding between the two governments about how Sudan could secure its removal from the list. The two sides originally reached an understanding earlier this year that Sudan would pay $335 million toward a court settlement for the victims of al-Qaeda's 1998 attack on US embassies in Kenya and Tanzania, as well as a smaller sum for relatives of victims of the bombing of the USS Cole in 2000. Sudan reportedly transferred the money into escrow this week.

Sudan has remained on the US terror sponsors list since 1993, although the previous government of President Omar al-Bashir began cooperating with Washington on counterterrorism nearly two decades ago. Iran, Syria and North Korea remain on the list.

Removal from the blacklist will ease the country’s access to international aid and investment.

Though Sudanese officials did not act on the proposal Pompeo delivered in August, negotiations heated up again this week after a senior US official reassured Hamdok last weekend of a variety of incentives for the heavily indebted and impoverished country.

An Israeli delegation then visited Khartoum this week. A Shin Bet official and Ronan Peretz, Prime Minister Benjamin Netanyahu’s envoy to Arab countries, were present for the trip.

Senior Trump adviser and son-in-law Jared Kushner also took a lead role in the initiative. "Getting peace agreements done are not as easy as we are making them look right now," Kushner told Reuters on Friday. "They are very hard to do.”

The subject of Israel is sensitive in Sudan, and the interim government is already facing protests in Khartoum over declining living standards.

Experts say Sudan’s removal from the list is long overdue and if the country’s newfound democratic project is to succeed, it needs all the access to international assistance it can get.

Congress now has 45 days to veto Sudan’s removal from the list, but the White House is betting lawmakers will not have the votes needed to override a potential Trump veto of their own veto.