From March to August, 389 Palestinian-owned structures were razed in the West Bank, the United Nations said. 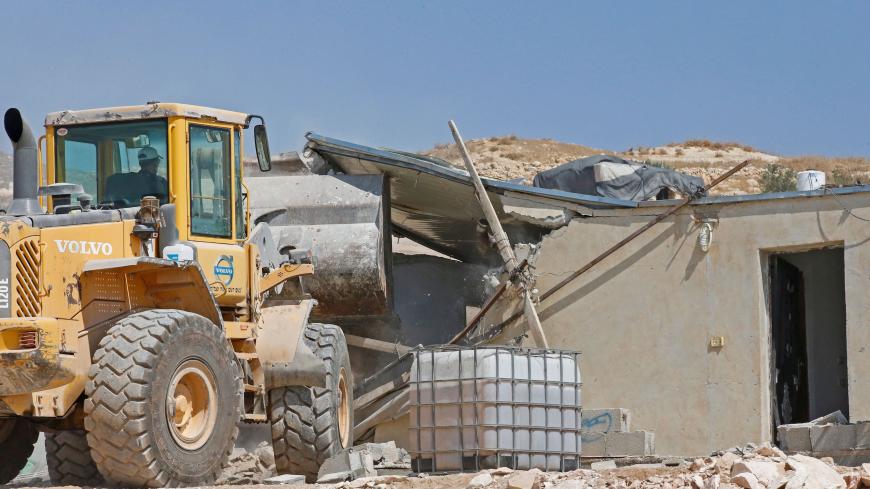 Israeli authorities demolish a Palestinian house in the southern West Bank village of Khirbet Jinba on Sept. 2, 2020, since it was reportedly built in "Area C" without Israeli authorization. - HAZEM BADER/AFP via Getty Images

The number of Palestinian homes demolished by Israel in the West Bank has increased sharply in recent months and further exposed displaced residents to the coronavirus pandemic, the United Nations said on Friday.

From March to August, 389 Palestinian-owned structures were razed, in what the the UN Office for the Coordination of Humanitarian Affairs (OCHA) said was the highest average destruction rate in four years. During that period, 442 Palestinians were made homeless, the agency said. In just the month of August, 205 people lost their homes, the highest displacement figure since January 2017.

The UN and human rights organizations say the policy amounts to collective punishment. According to OCHA, building permits are nearly impossible for Palestinains to obtain from Israel, describing the processing as “restrictive and discriminatory.”

Haaretz reported that between 2016 and 2018 the Israel government approved just 21 percent of 1,485 construction permit applications in Area C, the part of the West Bank under total Israeli control. The Civil Administration told the newspaper that most of the applications were for retroactive approval of buildings that were already under consideration for demolition.

The Coordinator of Government Activity in the Territories (COGAT), Israel’s military-run body handling civilian matters in the Palestinian territories, told AFP it had an “obligation to maintain order.” In the past, Israel has also said the demolitions are necessary because the buildings posed a security risk to Israeli soldiers operating in the vicinity.

On Friday, the UN humanitarian coordinator for the Palestinian territories called on Israel to stop the demolitions, which he described as unlawful.

"The destruction of property in an occupied territory is prohibited under international humanitarian law, unless absolutely necessary for military operations," Jamie McGoldrick said. "The global pandemic has increased the needs and vulnerabilities of Palestinians who are already trapped in the abnormality of prolonged military occupation.”

The coronavirus has worsened economic situation in the Palestinian territories, the UN warned this week, with donor support expected to drop to its lowest level in more than a decade. As of Thursday, the death toll from COVID-19 in Gaza and the West Bank had reached 224 and the total number of infections surpassed 37,000.