The Knesset adopted this morning more restrictions on demonstrations during the coronavirus lockdown, but some Blue and White members could not bring themselves to vote with the government on that. 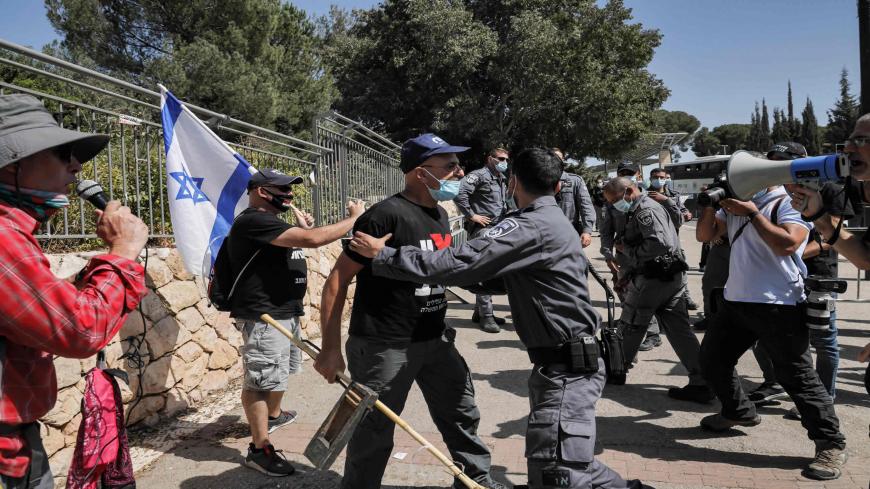 An Israeli policeman stands holding a demonstrator confronting him during a demonstration outside the Knesset, against a possible bill restricting protests amid new coronavirus pandemic regulations, Jerusalem, Sept. 29, 2020. - MENAHEM KAHANA/AFP via Getty Images

Protesters from the Black Flags movement surrounded the homes of Blue and White party ministers on the evening of Sept. 28, as soon as the Yom Kippur fast ended. They came to pressure these Cabinet members to prevent restrictions on future protests against Prime Minister Benjamin Netanyahu. The demonstrators claim that Netanyahu is dismantling democracy and taking steps to install a dictatorship in Israel in order to avoid standing trial. They also believe that the Blue and White ministers are little more than pawns in his hands.

The Black Flags movement began their protest right after the last election, on March 2, just as the coronavirus began spreading across the country. They are now one of the leading groups dedicated to bringing down Netanyahu’s government. They and other likeminded groups are behind the demonstrations that have been taking place for weeks outside the prime minister’s official residence on Balfour Street in Jerusalem.

What distinguished Monday night’s protests were its targets: senior members of the Blue and White party. The government had decided last week to reinforce a nationwide lockdown in order to curb the rising coronavirus infection rate. The demonstration took place the day before the Knesset convened to authorize more restrictions on the demonstrations in the framework of the nationwide lockdown. The protesters demanded that the Blue and White party ministers halt the Knesset move against demonstrations.

Thus, Blue and White was left in a problematic position. As part of the emergency government created to deal with the coronavirus crisis, they understood the need for drastic measures like quarantines to block the spread of the virus that causes COVID-19. On the other hand, they were under enormous pressure from protest movements identified with the left — an electorate that they claim to represent.

The party’s standing in the polls is bad enough as it is. At the same time, it considers protecting the right of citizens to demonstrate to be a bulwark of democracy and a means of preventing it from coming crashing down. The thing is that these two goals seem to clash. This has led in the past weeks and months to embarrassing disagreements and squabbles within the Cabinet and coalition, making it impossible to reach an agreement over the parameters of a quarantine. Meanwhile, the virus continues to ravage the country, claiming numerous lives. Because of the government’s current inability to function, thousands of people took to the streets on the eve of Yom Kippur, after the quarantine officially went into effect and despite of it.

It was only at 4:30 a.m. on Sept. 30, and after five squandered undecisive days, that the government made its decision on curtailing demonstrations. The hourslong debate through the night was accompanied by shouting and even more heated arguments, demonstrating the misfunctioning coalition and signaling that it may not last much longer. Some Blue and White Knesset members disobeyed coalition discipline and voted against the government. Blue and White member Miki Haimovich said from the Knesset plenum that she felt the nationwide closure could have been avoided had the prime minister taken concrete decisions, untainted by personal, political or electoral interests.

The final version that was brought to the Knesset vote gives the government the power to ban traveling over 1 kilometer (0.6 miles) from home to attend a protest, and limits outdoor rallies to a maximum of 20 people. Apparently, Netanyahu wished to ban demonstrations altogether, by means of emergency regulations, but Blue and White blocked the proposal.

The first person to attempt to derive political benefits from the melee was Blue and White party’s Justice Minister Avi Nissenkorn. He tweeted, “Dangerous efforts by the Likud to impose a ban on the right to demonstrate throughout the entire crisis have failed. Restrictions on movement during demonstrations will only be imposed during total quarantine. As soon as economic restrictions are relaxed, restrictions on movement during demonstrations and prayers will be lifted immediately.”

Knesset member Osnat Mark (Likud), a member of the Constitution, Law, and Justice Committee, responded to Nissenkorn by saying, “This is a pathetic tweet by the justice minister who wrote that he was able to protect the right to demonstrate, just to win another half a seat [in the Knesset].”

Mark was referring to the demonstrations outside the prime minister’s residence. Thousands of people attend those demonstrations regularly in order to demand Netanyahu’s immediate removal from office because of his upcoming trial for bribery, as well as his handling of the COVID-19 crisis. For the past few weeks, Netanyahu and other senior Likud officials have been accusing the demonstrators of spreading the coronavirus in Israel, claiming that the demonstrations have become coronavirus hotspots.

They also claim that the sight of thousands of people gathering together without proper social distancing has also trickled down to the rest of the population and had a resounding impact among certain sectors. Ultra-Orthodox communities have started to violate instructions about limited prayer services and large weddings take place within the Arab communities. Both have inevitably led to a steep rise in the number of infections.

Despite these claims, the demonstrations continue and have succeeded in creating a certain media buzz. Demonstrations that end in clashes with the police only intensifies the interest in them. Even while the Knesset’s Constitution, Law, and Justice Committee was meeting yesterday, a convoy of demonstrators arrived at the Knesset and clashed with the police.

Netanyahu has reacted derisively to the protesters and their claims. On Sept. 24, he stated, “People say that I want this quarantine in order to prevent demonstrations. That’s ridiculous. The quarantine is necessary to save lives and straighten the curve. I would say the opposite. From a political perspective, not only do these delusional and anarchistic demonstrations fail to hurt me, they actually help me. The people are fed up with this, and I don’t just mean supporters of my camp either.”

If that is really the case, however, then why is Netanyahu trying to stop the demonstrations?

The reason is that even if the core group of the demonstrators numbers just a few thousand people, they have succeeded in challenging government decisions by influencing the Blue and White party. More so, they have managed to send shockwaves through the broader public. This impacts Netanyahu’s ability to adopt a centralized approach to managing the coronavirus outbreak, as he did during the first wave in March, when the government succeeded in stopping the virus in its tracks.

On the other hand, Netanyahu is right, as the demonstrations are of no electoral benefit to the left-wing opposition. He is even right that they benefit him politically, too. The right-wing ultra-Orthodox bloc is skyrocketing in the polls. If elections were held today, Netanyahu would almost certainly continue to serve as prime minister, mostly likely in a rotation agreement with Yemina party chairman Naftali Bennett.

That is the big paradox of the demonstrations against Netanyahu. They may be able to set an agenda, but they fail to create political energy. On the contrary, the center-left camp is actually dwindling. The bottom line is that a government incapable of taking such urgent and significant decisions in times of national emergency is bound to lose its public legitimacy and might reach its end.