Kadhimi follows through on promises to reform Iraq's security sector

Prime Minister Mustafa al-Kadhimi's recent appointments and reforms are likely to face resistance from some political blocs and armed groups who feel they are losing power. 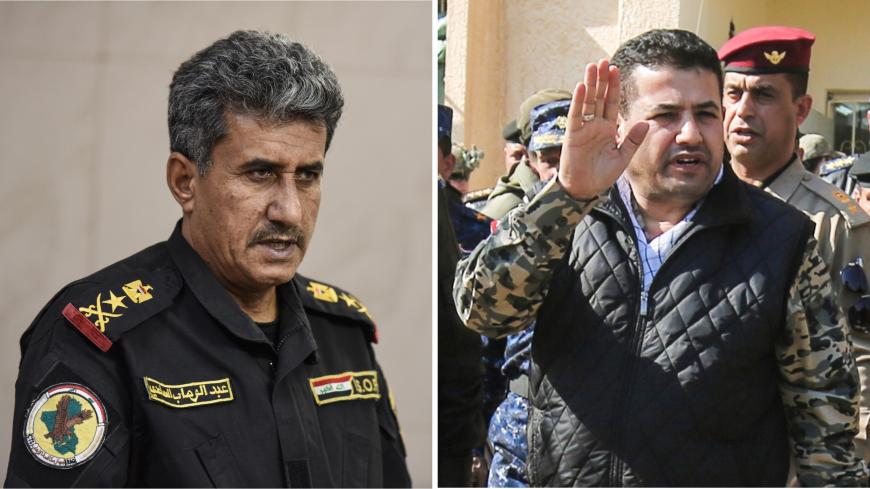 Iraqi Prime Minister Mustafa al-Kadhimi's appointments of Lt. Gen. Iraqi Abdul-Wahab al-Saadi (L) to return as counterterrorism chief and Qasim al-Araji (R) to be national security adviser have drawn fire. In left photo, Saadi speaks June 17, 2017, in the embattled city of Mosul. In right photo, Araji, when serving as interior minister, visits the village of Oreij, south of Mosul, on Feb. 22, 2017, where a temporary military base had been established for an assault against the Islamic State on the city's west bank. - MOHAMED EL-SHAHED (L)/AHMAD AL-RUBAYE (R)/AFP via Getty Images

BAGHDAD — Since he took office in May, Iraqi Prime Minister Mustafa al-Kadhimi has made a series of changes in senior and sensitive security positions to improve the security institutions’ performance. The moves have raised concerns in various political blocs that see these changes as strengthening Kadhimi's power.

Among the most prominent changes was the reinstatement of Lt. Gen. Abdul-Wahab al-Saadi — who had been dismissed in 2019 by Prime Minister Adel Abdul Mahdi — to lead the counterterrorism agency. Kadhimi also appointed former Interior Minister Qasim al-Araji as national security adviser, replacing Popular Mobilization Units (PMU) head Faleh al-Fayadh. Fayadh also was replaced as head of the National Security Agency by Gen. Abdul-Ghani al-Asadi, a former commander of the antiterrorism agency.

A source close to Kadhimi told Al-Monitor, “Kadhimi seeks to save the security institutions from political and partisan conflicts and to develop their capabilities by appointing competent leaders."

Kadhimi is targeting the so-called “deep state” that has practically controlled and managed the state’s key posts since 2006. Since that year, successive governments have limited the distribution of security and administrative positions to the large traditional blocs, based on the quota system. That was due to parliament failing to resolve the issue of appointing directors of national bodies. Article 61 of the Iraqi Constitution stipulates that parliament is to approve the appointment of ambassadors and directors of national bodies. However, this has not been done due to the sharp differences between political parties. As a result, prime ministers have appointed many such officials on a supposedly temporary basis.

Kadhimi, commenting on objections to the aforementioned appointments, stressed that these changes have a legal basis. He said the fact that the objections had crossed so many party lines showed he had no party's interest in particular.