Mustafa al-Kadhimi’s government has launched a campaign in southern provinces to get illegal arms out of the hands of militias and tribal groups. 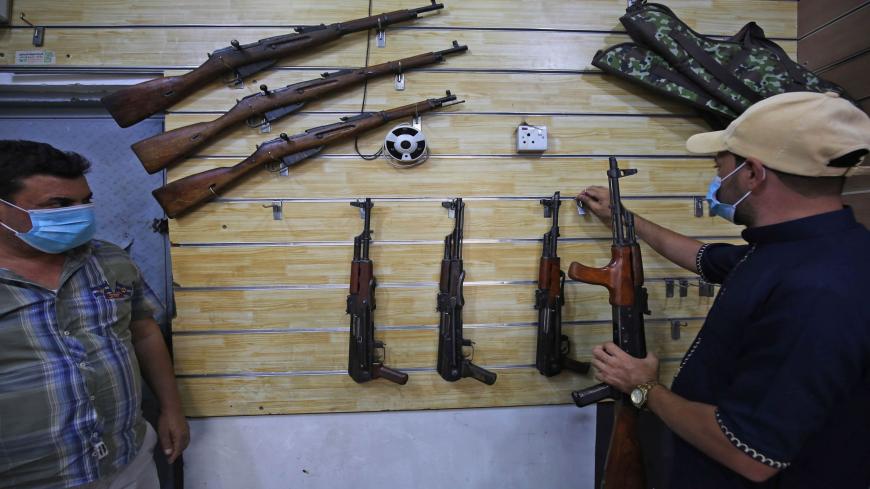 Iraq’s supreme religious leader Ayatollah Ali al-Sistani encouraged Mustafa al-Kadhimi’s government on Sept. 14 to proceed with its campaign to crackdown on possession of illegal weapons by armed groups outside of state control, in a rare stance for the religious authority.

In the past, the authority would call for maintaining security in general, but this time, Sistani encouraged the government’s plan. Kadhimi now has Sistani’s support to focus on armed groups and factions claiming to work alongside the official Iraqi forces.

The Iraqi security forces took to carrying out a wide-scale campaign Sept. 5, to withdraw illigal arms in the southern provinces. The campaign started in Basra province, where tribal feuds are ongoing. It seems that the government is targeting heavy weapons at this stage, postponing the confiscating of all light weapons for another time.

Basra Operational Command in the far south of Iraq announced Sept. 12 that it “will not confiscate light weapons and will allow one weapon per house only.”

Spokesman for the Iraqi armed forces Yahya Rasoul told Al-Monitor, “Weapons should be in the hands of the Iraqi state only, and these operations carried out by the security forces will continue until they achieve their goals.”

He added, “The security forces do not differentiate between one weapon and another. They target any weapon that is not in the hands of the state.”

The campaign focused on the southern provinces due to the ongoing fights between some factions and the presence of drugs gangs and weapons smuggling.

Since its onset, the campaign has been backed by political blocs and activists, mainly by former Prime Minister Nouri al-Maliki who voiced his support.

Iraqioun Alliance, led by Ammar al-Hakim and formed after Kadhimi’s government received the parliament’s confidence, supported the campaign of withdrawing illegal weapons and noted that “the campaign aims at ensuring a stable and secure environment for future elections.”

The campaign to seize illegal weapons was part of Kadhimi’s government program, and the members of parliament voted on it May 6.

The joint operations’ command that was tasked with collecting illegal weapons said Sept. 6 that it “will not go easy on weapons possession outside the state’s authority,” but it seems that there is some exaggeration in the stance of the operations’ command in this regard.

The results of the security operations in southern Iraq showed that the government focused on taking from civilians’ houses weapons that the owners claim they own to protect themselves from drugs gangs.

This operation poses several questions, and at the same time it put Kadhimi’s government in an embarrassing position. Some wondered “where the government stood vis-a-vis the weapons of militias that are not part of the Popular Mobilization Units [PMU].”

Iraqi members of parliament made several propositions to withdraw illegal weapons, including determining the type of weapons to be confiscated, the location and whether the weapons located in the Kurdistan Region of Iraq are also included. Some said that “withdwaing illegal weapons requires national dialogue.”

Dozens of rifles and hand grenades carried daily in major operations cannot possibly give Iraqi citizens hope. The government has full information about the militias, tribes and gangs cooperating with political parties and possessing large weapons racks, but it still has not targeted those.

Fadel Abu Raghif, a security expert close to the Iraqi intelligence services, told Al-Monitor, “The withdrawal of illegal weapons requires a huge effort and a sovereign decision bigger than a security or military campaign.”

He added, “Weapons outside of state forces will not be withdrawn unless there is a political inclination to support the state’s project. Otherwise tangible results on the ground won’t exist.”

In the past few years, weapons have been sold to the public via social media networks such as Facebook, in addition to the sale of weapons on the black markets in east Baghdad and by well-known traders. But the campaign has not included them yet.

It seems that Kadhimi does not want to engage in a direct confrontation with weapons traders and militias; he wants to encroach on them first and then curb their power. Such campaigns would cost the state many lives and money.

However, weapons in Iraq are not limited to Kalashnikov rifles or intermediate weapons. Some armed factions that are not part of the PMU possess missiles and cannons that have nothing to do with the Iraqi state. Some even have armored vehicles and tanks. Therefore, dealing with such weapons amounts to suicide for any Iraqi government.

On Aug. 27, Iraqi parliament Speaker Mohammed al-Halbusi said that uncontrolled arms are in the hands of Shiite factions affiliated with a Shiite government, suggesting that arms proliferate in southern Iraq and are in the hands of those who have authority in the state.

The armed Shiite factions, whether they fall under the PMU or not, are reassured. According to some information, Kadhimi has reassured them that nobody will touch their weapons. The military operations so far prove this, as well as the absence of any opposing stance from these factions and their leaders.

In a nutshell, weapons cannot be under full control of the state, at least in the short run. It would mean a deadly duel with the armed factions that have enough weapons and influence to outpower the state.