Fatah has criticized the recent visit of Hamas leader Ismail Haniyeh to a Palestinian refugee camp in Lebanon, where he received a strong welcome. 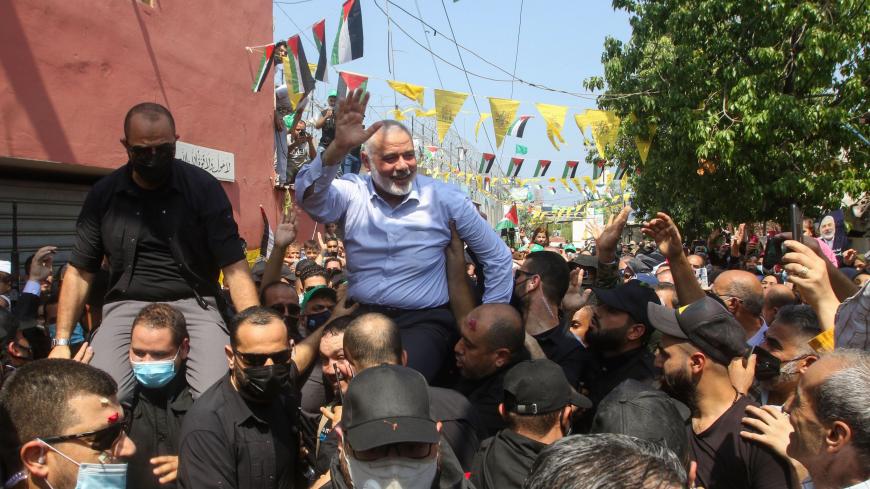 Palestinians are still sifting through the Sept. 6 visit of Ismail Haniyeh, the chief of Hamas’ politburo, to the Ain al-Hilweh camp for Palestinian refugees in South Lebanon, where he received a warm welcome, including being carried on the shoulders of the crowd at one point.

Haniyeh’s visit to Lebanon, which began Sept. 1, was his first appearance there in 27 years. In 1992, he and more than 400 Hamas members were exiled to Lebanon by Israel; he returned to the Gaza Strip in 1993. This time, Haniyeh flew into Lebanon from Turkey.

A main aim of Haniyeh’s visit to Lebanon this month was for him to participate in a meeting of Palestinian factions' secretary-generals Sept. 3 in Beirut, in parallel with a meeting held in Ramallah in the West Bank.

After meeting with representatives of the Palestinian factions in Beirut, Haniyeh concluded his visit to Lebanon with a field tour of Ain al-Hilweh, where he delivered a speech praising the resilience of the camps’ inhabitants. He stressed that Palestinian refugees are guests in Lebanon until they achieve the right of return to Palestine.

Raafat Murra, the head of Hamas' international media office, told Al-Monitor, “All Palestinian forces [in the camp] welcomed Haniyeh, who hails from Gaza. Hamas is in contact with all Palestinian components, and its leadership resides in the camps [in Lebanon]. We have strongly defended the interests of refugees in Lebanon, such as changing laws that prohibit them from working, and we provided them with huge social and development projects. A few years ago, we launched a security and political initiative to protect the camps, and we make sure that any Hamas delegation [that comes to Lebanon] visits the refugee camps. Several members of the politburo have indeed visited the camp and met with refugees.”

Haniyeh’s $1 million donation to Palestinian refugees across Lebanon has contributed to his popularity in the camps.

Meanwhile, Fatah cadres inside Lebanon and abroad criticized Haniyeh’s visit while also accusing the Palestinian Authority (PA) of abandoning the refugee camps in Lebanon and leaving Hamas to impose its control. Fatah supporters took to social media to criticize PA President Mahmoud Abbas because he did not give the refugee camps the same importance that Hamas has over the years.

Nabil Amr, member of Fatah’s Revolutionary Council and a former PA minister of parliamentary affairs, said Sept. 8 that Haniyeh’s visit is a negative sign that shows how the Palestinian Liberation Organization has lost its sway in refugee camps in Lebanon to Hamas.

A Fatah official in Ain al-Hilweh told Al-Monitor on condition of anonymity, “The conduct of our political leadership is the reason behind our declining public popularity and people’s massive welcome of Haniyeh. Refugees in the camps can see the national political stance of Hamas, its resistance and services, as opposed to the absent visits of our prominent officials in Fatah and the PA who visit Lebanon and spend days in hotels without going to any camp. For that reason, people have abandoned us and resorted to Hamas.”

Ain al-Hilweh is among the largest Palestinian refugee camps in Lebanon, where 47,000 out of 450,000 Palestinian refugees live. In the 1980s, it was the stronghold of the PLO and Fatah, but the tables turned in recent years due to the PLO’s neglect of the camps, and it seems Hamas was able to fill the resulting void.

Yasser Ali, a Palestinian author for Al-Awda news website who specializes in refugee affairs in Lebanon, told Al-Monitor, “Haniyeh’s visit is historic and exceptional, and its timing is key amid attempts to impose the deal of the century [the US Middle East peace plan] and Arab normalization with Israel, as well as regional and international efforts to pressure Hamas. Palestinian refugee camps [in Lebanon] encompass all Palestinian factions, and Hamas has good ties with all of them. The public welcoming was not only dedicated to Hamas, but also to the resistance project as a whole. Palestinian refugees are eager for their political leaders to visit them in their camps.”

Haniyeh’s visit sparked controversy only among Palestinians but from several Lebanese political leaders who saw his visit as political and media propaganda for the Iranian axis and considered it disrespectful to Lebanese sovereignty because he threatened Israel during a speech in Ain al-Hilweh camp.

But Emad Mohsen, a spokesperson for the Democratic Reformist Current led by dismissed Fatah leader Mohammed Dahlan, told Al-Monitor, “The massive welcome that Haniyeh received in Lebanon was natural and expected, since he is the leader of Hamas, which is an authentic component of the Palestinian people. The failure of Fatah’s current leadership and its lack of support, neglect and marginalization of the camps gave this visit more momentum.”

Saleh al-Arouri, Haniyeh’s deputy, told the Al-Mayadeen channel Sept. 7, “Haniyeh’s visit to Ain al-Hilweh was not a way to score points against Fatah, because he was welcomed by all factions, including Fatah, and Fatah participated in helping organize the visit this visit.”

Abdul Sattar Qassem, a professor of political sciences at An-Najah University in Nablus in the West Bank, told Al-Monitor, “It is normal that Fatah and the PA’s popularity in refugee camps is dwindling. The Oslo Accords they signed eliminates the right of return. For that reason, refugees warmly welcomed Haniyeh because they believe Hamas is the only party capable of gathering crowds locally and abroad. This indicates that Palestinians are gradually distancing themselves from the PA and Fatah.”

While Haniyeh’s visit to Ain al-Hilweh constituted a gain for Hamas at a time it is being pressured by the United States, Israel and some Arab countries, it was a setback for Fatah and the PA because they appear to have lost sway to Hamas in a historical stronghold — the refugee camps in Lebanon. In light of this, the PA might try to increase its activities in the camps to regain some of its luster.