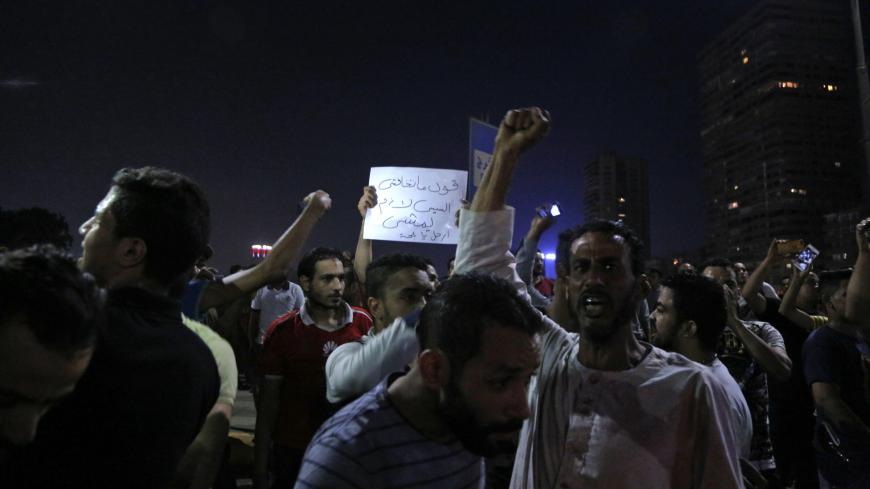 Egyptian protesters shout slogans as they take part in a protest calling for the removal of President Abdel Fattah al-Sisi in Cairo's downtown on Sept. 20, 2019. Demonstrations were held again in Egypt on Sept. 20-21, 2020; many protesters, if not detained while demonstrating, were arrested later at their homes. - AFP via Getty Images

CAIRO — Egyptian lawyers say the country's security forces have made a series of arrests in response to Sept. 20-21 demonstrations seeking political and economic reforms. The protests took place in response to a call from Spain-based Egyptian contractor Mohamed Ali, who has been a thorn in the government's side.

The turnout for the demonstrations was limited amid a growing governmental crackdown. Various neighborhoods in Cairo witnessed demonstrations; there also were protests in other governorates, most of which are rural.

People who witnessed the demonstrations told Al-Monitor that there were calls for the departure of President Abdel Fattah al-Sisi; one witness said, "The security forces dealt with them brutally as they rigorously fired tear gas canisters to disperse the protests."

Human rights lawyer Hala Abu Duma told Al-Monitor she "expects more arrests in the areas that saw protests." She said, "Until this morning, the security forces are still coming with detainees for investigation."

Abu Duma told Al-Monitor that she was present for Supreme State Security Prosecution interrogations of dozens of detainees on Sept. 20 and 21, and said all were from poor popular areas or rural villages outside Cairo but were transferred to Cairo following their arrest.

Abu Duma said there were dozens of detainees. “One cannot say the exact number of detainees, but many human rights lawyers, including myself, were there last night with many detainees arrested during the demonstrations until the early morning hours of Sept. 22,” she said.

Ali, who opposes Sisi's regime, had reiterated his call for Sept. 20 demonstrations; the date marks the anniversary of protests that broke out in 2019, when thousands of demonstrators were arrested and imprisoned on charges of “belonging to terrorist groups.”

A report published by the Egyptian Commission for Rights and Freedoms said the number of demonstrators detained in September 2019 following the protests that erupted in a number of governorates over the course of five days was estimated at more than 4,400. More than 1,439 of them are still detained.

Human rights lawyer and former presidential candidate Khaled Ali called on human rights lawyers to provide legal support to those detained in the past few days. He also published on his Facebook page a list of 25 detainees he was present with at the interrogations.

Khaled Ali told Al-Monitor over the phone, “The prosecution interrogated many of the demonstrators who were detained and decided to keep them in detention for 15 days as a precaution, pending accusations of rallying, demonstrating, joining a terrorist group, spreading fake news and harming Egyptian national security.”

He added, “There are many human rights lawyers at the … [prosecution] headquarters awaiting the arrival of new detainees from different governorates.”

Security forces deployed in vital areas across the country ahead of the Sept. 20-21 demonstrations and closed all cafes in the vicinity of the capital, Cairo, and surrounded main squares. The forces arrested citizens and searched them and their phones in violation of the law and the constitution, observers said.

A human rights lawyer told Al-Monitor on condition of anonymity that the security forces have embarked on a new pattern of arrests by deploying security personnel among demonstrators to photograph them and subsequently arrest them at their homes.

The human rights lawyer added, “I attended the interrogation with four people, all of whom were arrested at their houses, which were stormed by security forces. It is as if the message the security forces wanted to convey is that any demonstrator will be arrested and imprisoned even if not during the demonstration itself.”

Muhammad Ayoub, 45, the owner of a restaurant in the Basateen area in Cairo, which witnessed continuous demonstrations, told Al-Monitor that the security forces have been arresting citizens randomly, and that one of his workers was arrested while passing by in the street. The worker, he said, "was only released after I contacted the responsible field officer and assured him that he works for us and that he was only in the area for the sake of work not for the sake of demonstrating.”

Ahmed Aboul Fotouh, a human rights lawyer in Alexandria governorate, located about 220 kilometers (135 miles) north of Cairo, told Al-Monitor that the security forces “have rearrested some citizens who were arrested last year in the Sept. 20, 2019, demonstrations.”

Aboul Fotouh added, “I was surprised by the multiple calls I received from the families of detainees whom I worked with last year. They all said that their relatives’ place of detention is yet to be revealed.”

He said he advised the families of those arrested to submit complaints to the Egyptian Public Prosecutor and to the National Council for Human Rights regarding their relatives being subjected to enforced disappearance.