Biden endorses lower troop levels in Iraq, fight against IS in interview

Joe Biden told Stars and Stripes he wants to stop "forever wars" but keep some troops in Iraq and Syria. His opponent, Donald Trump, also pledges to withdraw more troops. 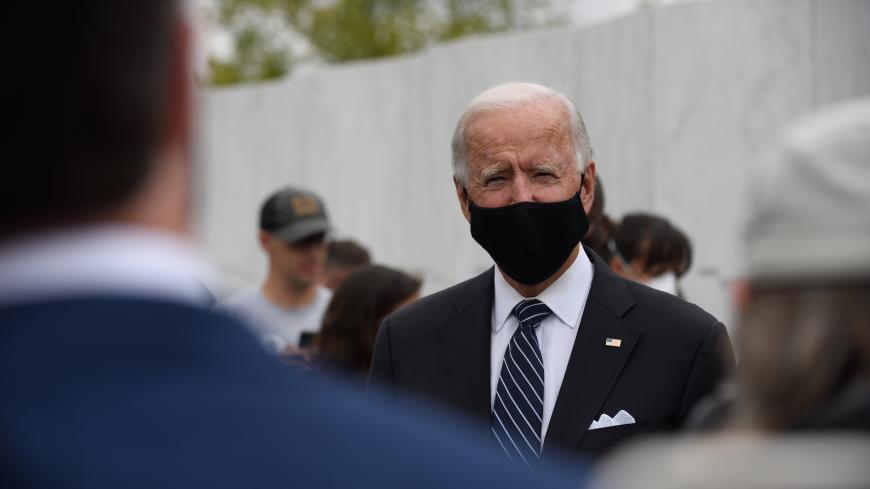 Democratic presidential nominee Joe Biden and his wife, Jill (not seen), greet family members of victims after laying a wreath in front of the name of Flight 93 co-pilot Leroy Homer at the Wall of Names following a ceremony at the Flight 93 National Memorial commemorating the 19th anniversary of the crash of Flight 93 and the 9/11 terrorist attacks, on Sept. 11, 2020, in Shanksville, Pennsylvania. - Jeff Swensen/Getty Images

Presidential hopeful Joe Biden said he would end “forever wars” but keep some US troops in the Middle East if elected president.

Biden, the Democratic Party nominee facing President Donald Trump in the November election, gave an interview to the US Department of Defense-owned Stars and Stripes on Thursday.

In the interview, Biden said, “I support drawing down the troops.” He also said the Islamic State (IS) is still a threat, adding, “We still have to worry about terrorism.” Biden also told Stars and Stripes that the situation is complicated in Iraq and Syria and that he cannot guarantee a full withdrawal as a result.

Much of the interview focused on Iraq, Syria and Afghanistan.

Biden's endorsement of a reduced but continuous military footprint in the region is not a new policy. His campaign website says he would remove most US troops from the Middle East and that the remaining forces would focus on IS and al-Qaeda.

Ending US wars in the Middle East has support on both sides of the aisle, with Trump often railing against “endless wars” in the region. On Wednesday, the US military announced it would reduce its footprint in Iraq from more than 5,000 troops to 3,000. Trump used the news that day to rally his base, tweeting, “Let’s bring them home” alongside a Fox News video that criticized the influence of arms manufacturers on US foreign policy.

If elected, Biden would conduct Middle East policy markedly differently than Trump does — their agreement on troop drawdowns not withstanding. Biden supports reentering the Iran nuclear deal under certain conditions and ending US support for the Saudi-led war in Yemen.

Biden’s support for keeping some US troops in Iraq could be influenced by President Barack Obama’s Iraq policies. Biden was vice president when Obama decided to remove all troops from Iraq in 2011 in fulfillment of his campaign promise. In 2014, IS swept through northern Iraq and the Obama administration sent forces back in as part of the global anti-IS coalition.