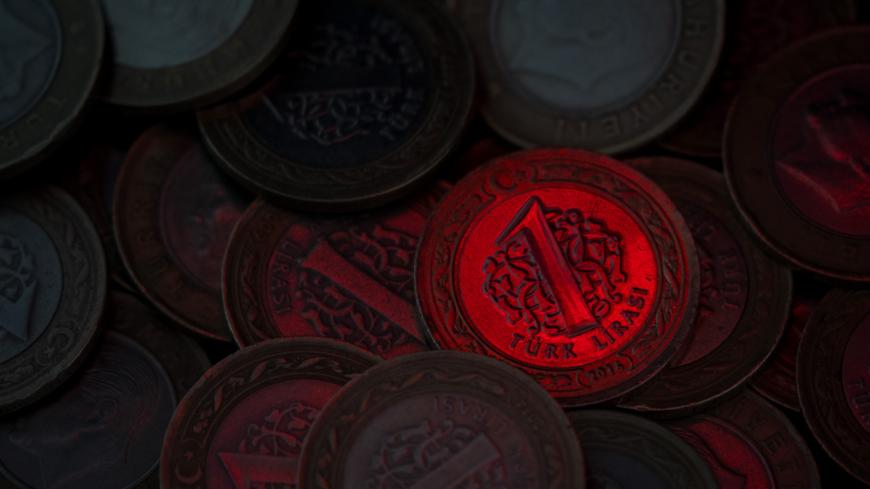 ISTANBUL – Following months of relative stability, Turkey’s currency is once again volatile as the lira fell 2% against the dollar Wednesday.

The Turkish lira was trading at 7.04 per dollar at 6 p.m. Istanbul time. The slump is likely linked to ongoing concerns over depleted reserves, which have been used to prop up the currency, along with rising foreign debt obligations.

The news comes after the dollar fell to its lowest value in a decade last month. Analysts now believe current trends could bring about a financial crisis if the Turkish Central Bank does not implement new monetary policies.

“There is a capital outflow,” Atilla Yesilada, a political analyst at Global Source Partners, told Al-Monitor. “We have a current account deficit as well as maturing foreign debt, most of which is rolled over at this time of the year, and this automatically puts pressure on the currency.”

Observers claim a significant increase in interest rates is required to stave off further damage to the Turkish lira and the broader economy.

“Some interest rate hikes may be among the solutions, but they would not be a permanent solution because they may not properly address the balance-of-payments problem,” Eray Yucel, an economics faculty member at Ankara’s Bilkent University, told Al-Monitor.

The Central Bank is believed to have spent about $60 billion since the start of the year on currency interventions to maintain the lira below the psychological barrier of seven per dollar, which it surpassed over the last week.

As a result, the International Monetary Fund stated in its August 2020 External Sector Report that Turkey’s external financing needs and low reserves have left the country “vulnerable to shocks.”

“Focused structural reforms would be necessary to enhance productivity, increase resilience to shocks, and strengthen the broader public sector balance sheet and improve transparency in general,” the IMF stated in its report.

The lira slid after a Turkish stocks recorded their lowest close since May Tuesday, with the the Borsa Istanbul 100 Index benchmark dropping 5.2%.

The downward trends come despite some positive economic markers in July, including a rise in Turkey’s manufacturing activity and a slight dip in consumer price inflation to 11.76% year-on-year.

“There is a pure sense of uncertainty,” Yucel told Al-Monitor.

Yucel said the mixed economic signals were increasing investor speculation and the Central Bank was moving to limit lira liquidity to constrain trading that could further devalue the currency.

“There are rumors among professionals that the behavior of some state banks regarding Turkish lira liquidity seems to have trapped the market,” Yucel told Al-Monitor. “There is some pressure to discourage speculation on Turkish markets.”

On Tuesday, overnight rates to borrow Turkish liras briefly surged 1,020 percentage points to 1,050% after local currency supplies were drained by recent interventions, Bloomberg reported. The spike was likely caused by the rapid selloff of $2.5 billion by state-owned lenders last week to prop the lira.

Such interventions are seen as short-term solutions to keep the currency afloat, but analysts maintain significant capital inflows and higher interest rates would be necessary to stave off a looming economic crisis.

While Turkish President Recep Tayyip Erdogan has long opposed higher interest rates, some relief could come in the form of tourism revenue as coronavirus travel restrictions are eased and Turkey resumes more flights to Europe and Russia.

“I can’t put myself in Erdogan’s place, but he has reason to hope,” Yesilada told Al-Monitor. “He’s expecting tourism to generate more revenue and he’s hoping that somehow exports will soar and so Turkey won’t need foreign credit or financial flows to defend the lira.”