Too many factors — especially tensions with Greece — are at play to determine whether recent gas discovery in the Black Sea will translate into massive commercial and political gains for Ankara. 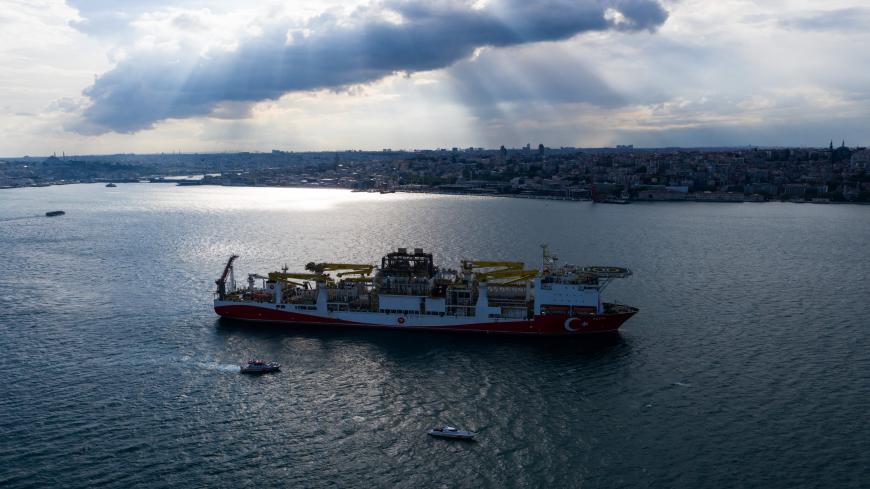 In this aerial photo taken with a drone, Turkish drilling vessel Fatih sails up the Bosporus toward the Black Sea, Istanbul, Turkey, May 29, 2020. - Burak Kara/Getty Images

Turkey may have reached a milestone last week in its dreams to become energy independent. Although the Erdogan government’s timeline appears dubious and there is understandable domestic skepticism, various technical, financial and political dynamics will decide whether Turkey will grab or pass this gas and oil opportunity.

On Aug. 21, President Recep Tayyip Erdogan announced a big find of natural gas off Turkey’s western Black Sea coast. While Erdogan addressed the nation during the live broadcast from Istanbul’s historic Dolmabahce Palace, Erdogan’s son-in-law and Minister of Economy Berat Albayrak, together with Energy Minister Fatih Donmez, joined the spectacle from the main deck of the Fatih drilling ship, which made the discovery. The event was suffused with nationalist and religious symbols.

The gas field, alternatively dubbed “Tuna-1” and “Sakarya,” reportedly holds 320 billion cubic meters (bcm) of natural gas, which Erdogan promised to supply to Turkish consumers by 2023. One expert cited in a previous Al-Monitor story called the 2023 goal “technically impossible.” Even the pro-government newspaper Yeni Safak cited officials who estimated that it would take seven to 10 years for production to begin.

Many in the opposition questioned the veracity of the Turkish government’s claims, calling it a “rabbit out of a hat” trick. Veteran journalist Rusen Cakir, however, took a different tone. Cakir ascribed the announcement to Erdogan’s “need for good news” because “Turkey has not been governed well for a long time. Or, more accurately, it has been governed very poorly. And for that reason, the country is in a serious crisis in every area — economic, political, cultural.” Cakir added how Erdogan has trouble in exciting base but even such news may not help him: “There is no possibility to pull a rabbit from the hat because there is no hat.”

Turkish consumption has averaged about 45 bcm (1.59 trillion cubic feet) in recent years, so the Tuna-1 field could lessen imports from Iran and Russia if fully tapped. Turkey imports 70% of its energy needs, which constitute 20% to 25% of overall Turkish imports. Removing that burden would practically end Turkey's current account deficit headaches. The good news is that by the time gas from Tuna-1 comes online later this decade, most contracts with Iran and Russia are set to expire.

But not so fast, warns Volkan Emre, a US-based energy security consultant. In an email to Al-Monitor, Emre pointed out the significant “downward trend in natural gas prices since 2009 (from $13.3 per thousand cubic feet to $2.5 per thousand cubic feet) … primarily driven by the massive expansion of shale gas production in North America.” Emre added that the coronavirus pandemic and the recent discovery of mega-fields such as Egypt’s Zohr will increase excess supply. “Under the assumption that the price of natural gas will remain flat both in the short and the long term, the economic rationale of a multi-billion-dollar investment is highly questionable.”

The price tag matters because it has been the main consideration for Turkey in the past. Turkey has been looking for oil and gas in the Black Sea since the late 2000s. Mehmet Uysal, general manager of the state-owned Turkish Petroleum Company from 2007 to 2013, often brought good tidings that big oil and gas treasures could be delivered to Turkish consumers by the late 2010s. Yet all those plans assumed high hydrocarbon prices that would justify the high investment costs. Oil and gas prices are at an all-time low because of the pandemic, while the Turkish economy has entered a dangerous debt spiral.

To be sure, energy independence is a necessity for Turkey. But Tuna-1’s current reserves pale in comparison to reserve estimates in Russia and Iran — a whopping 39 trillion cubic meters and 32 trillion cubic meters, respectively. To make the extraction of Black Sea gas and supplying it to Turkish consumers viable, greater reserves would have to be discovered near Tuna-1. At any rate, just as reserve estimates in Russia and Iran are liable to change, if Tuna-1’s reserves prove to be lower than 320 bcm, the costs to extract that gas will become even higher.

Emre distinguishes between contracts with Russia and Iran: “It would be naive to think that Turkey, the second-largest natural gas importer of Russian gas, would transition away from its 33-year-long contractual relationship with Russia, a country that has a track record of using natural gas, especially natural gas pipelines, as a major foreign policy and geopolitic[al] tool.”

Iran, however, is different. Emre said, if Tuna-1 / Sakarya “could be verified as a reliable production source, it won’t be surprising to see Turkey transition away from Iranian gas at the end of its contractual obligations in the mid-2020s [because] Iranian gas in comparison with Azerbaijani and Russian gas is expensive … [and] there has been significant inefficiencies in the gas inflow from Iran due to infrastructural problems on the Iranian side, and Iran doesn’t use natural gas as a strong geopolitical tool like Russia. … Turkey can mitigate potential problems with Iran more easily.”

In fact, Ankara could use the expiry of its gas contracts with Moscow and Tehran as a bargaining chip over the ongoing tensions in the eastern Mediterranean with its Western frenemies — especially France and Greece. By playing a careful diplomatic game and reaching an understanding with Greece, not only could Turkey thwart the risk of European Union and US sanctions, it could secure financing and technical partners to extract its share of the gas from the Mediterranean and the Black Sea. It would not be wrong to read Turkish Foreign Minister Mevlut Cavusoglu’s remarks that Turkey is open to talks with Greece in that light.