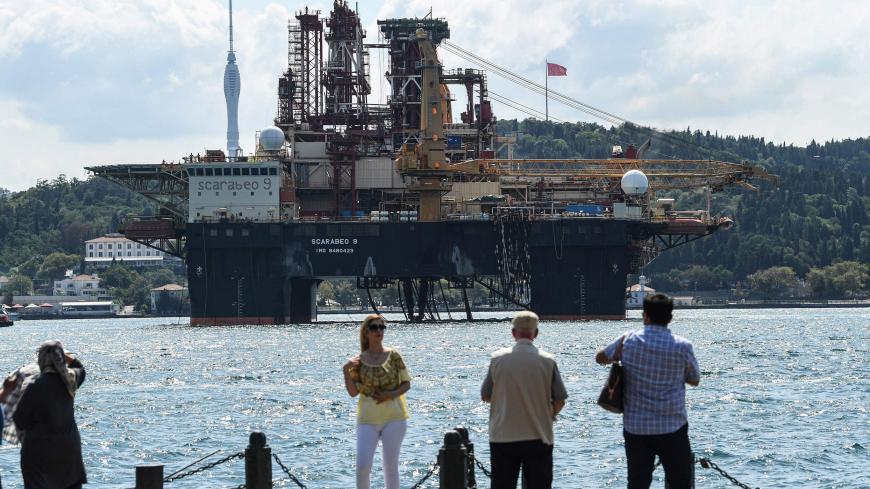 People watch as Scarabeo 9, a 115-meter-long and 78-meter-high Frigstad D90-type semi-submersible drilling rig, passes on the Bosporus Strait en route to the Black Sea in Istanbul on Aug. 29, 2019. - OZAN KOSE/AFP via Getty Images

President Receip Tayyip Erdogan unveiled Turkey’s biggest-ever natural gas find in the Black Sea on Friday, a discovery he said will pave the way to energy independence for the country.

“Turkey has discovered its biggest natural gas [reserve] in Turkish history in the Black Sea,” Erdogan said during a televised address Friday at Istanbul's Dolmabahce Palace. “My Lord has opened the door to unprecedented wealth for us.”

The president said Turkey’s drilling ship Fatih had found some 320 billion cubic meters (11.3 trillion cubic feet) of natural gas in the western Black Sea. The vessel has been carrying out exploration work for the past month in an area known as Tuna-1 near a Romanian gas field.

Erdogan said Turkey plans to extract and make the gas available by 2023 — the 100th anniversary of the founding of the Turkish Republic.

“This reserve is actually part of a much bigger source. God willing, much more will come. As a country that depended on the outside for gas for years, we look to the future with more security now," he said. “There will be no stopping until we become a net exporter in energy.”

But amid the jubilation, some sources voiced skepticism over the 2023 production goal and whether the reserve contains enough recoverable gas to meet Turkey’s energy needs.

A well-placed source who has a broad knowledge of drilling and production in Turkey told Al-Monitor that the “2023 [goal] is technically impossible,” pointing out at the lengthy process that lies ahead, which includes the drilling of new exploration wells, further tests, development drilling and production. The initial production process will take at least six to seven years, the source added.

“This is a very difficult depth for the production process and there are only a number of companies that have the necessary equipment to produce gas in this depth,” the source said, adding that most of these companies are based in the United States.

“[320 billion cubic meters] only indicates a rough estimate,” another well-placed source from the sector said, also pointing out that the gas still needs to be tested for its permeability, pressure and thickness.

“This is a hopeful development, but at this point we cannot say that this discovery will pay off Turkey’s account deficit in a few years,” the source concluded. “That will be seen in the upcoming years.”

Ankara has been looking to reduce its dependence on foreign energy sources, particularly from Russia and Azerbaijan, that cost the country $41 billion last year. Turkey's finance minister, Berat Albayrak, expressed hope Friday that Turkey "will no longer post current account deficits” after the discovery.

This month, Turkey resumed exploratory drilling in the eastern Mediterranean Sea, intensifying a territorial dispute with Greece and Cyprus over maritime rights and straining Turkish relations with the European Union. During his address Friday, Erdogan said Ankara has no intention of backing down from exploration in the contested waters.

“We will accelerate our activities in the Mediterranean with the deployment by the end of the year of Kanuni,” Erdogan said, referring to a Turkish drilling ship currently under maintenance. "God willing, we expect similar good news.”