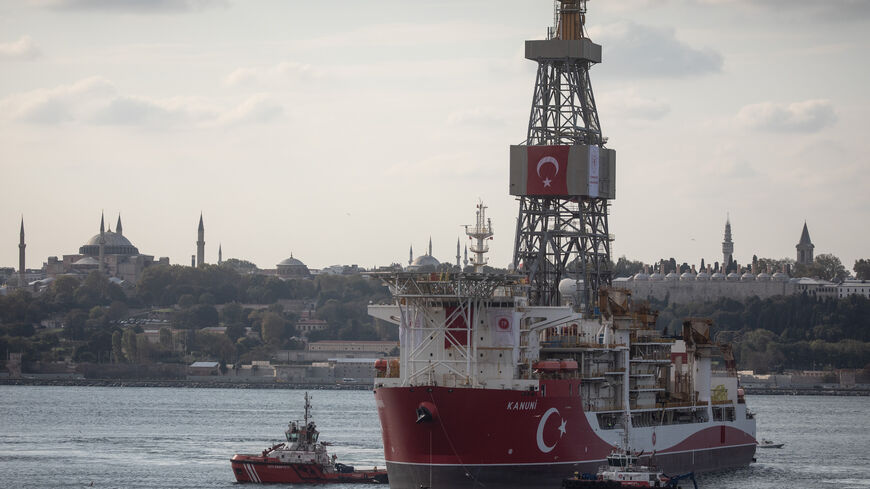 The Turkish drilling vessel Kanuni arrives for alterations at the Haydarpasa port on Oct. 19, 2020, in Istanbul. The vessel will undergo tower disassembly before heading to the Black Sea. - Chris McGrath/Getty Images

"Our Fatih drill ship has made a new natural gas discovery of 135 billion cubic meters in the Amasra-1 well in the Sakarya gas field," Erdogan said during the groundbreaking for a natural gas facility in the coastal province of Zonguldak.

The latest discovery brings Turkey's total reserves to 540 billion cubic meters. According to the state-run Anadolu Agency, Erdogan said its drilling operations are continuing in the Amasra-1 well area and that "we expect new good news from this region."

In August 2020, Erdogan announced that its drilling ship, Fatih, had made the country’s biggest-ever natural gas find in the western Black Sea. The ship had discovered 405 billion cubic meters in the Tuna-1 well in the Sakarya field off the Turkish coast.

Ankara, which is looking to reduce its dependence on Russian, Azerbaijani and other foreign energy sources, aims to extract and make the gas available by 2023 — the year that marks the 100th anniversary of the founding of the Turkish Republic.

According to Bloomberg, the Black Sea region's Sakarya field “is expected to provide as much as 30% of the gas Turkey’s $730 billion economy requires when plateau production is reached, targeted for 2025.”

The announcement Friday comes after Turkey indicated it could expand drilling activities in the eastern Mediterranean Sea. Last year, Turkey angered the European Union when it deployed a survey vessel in search of offshore gas reserves in waters also claimed by EU members Greece and Cyprus.