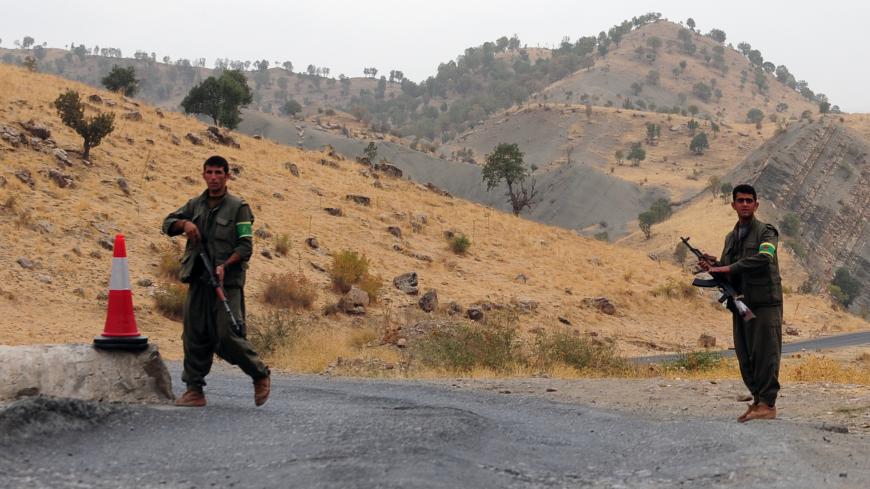 Kurdistan Workers Party (PKK) rebels man a security checkpoint on October 28, 2009, near a PKK base in the Qandil Mountains, near Rania province, in northern Iraq. - MUSTAFA OZER/AFP via Getty Images

On Wednesday, Turkey’s Ministry of Foreign Affairs said it wants Iraqi cooperation against the PKK but is prepared to act unilaterally.

“Our country is ready to cooperate with Iraq in this regard,” read a statement published by the state-run Anadolu Agency. “However, if the PKK presence in Iraq continues to be tolerated, Turkey is determined to take the necessary measures for the security of its borders, wherever it may be.”

On Tuesday, a Turkish drone strike killed two Iraqi border guards and their driver in the Bradost area of the Kurdistan Region of Iraq. Bradost is a mountainous area close to the Turkish border. The strike targeted a meeting between the border officials and PKK fighters. Kurdish peshmerga forces control the Kurdistan Region, but federal Iraqi forces have a presence near the border.

The PKK fights for greater Kurdish political and cultural rights in Turkey. It has long based itself in the Qandil Mountains along the Kurdistan Region’s border with Turkey. Both the Iraq federal and the Kurdistan Region governments have called on the PKK and Turkey to stop operating in the area. Turkey and the United States consider the PKK a terrorist organization.

Turkey regularly targets the PKK in Iraq. Ankara began an expanded air and ground offensive against the group in the country in June.

After the strike that killed the border guards, Iraq canceled a planned visit by Turkey’s defense minister. Past condemnations from Iraqi authorities have failed to stop Turkey’s attacks. Turkey maintains several military bases in northern Iraq.