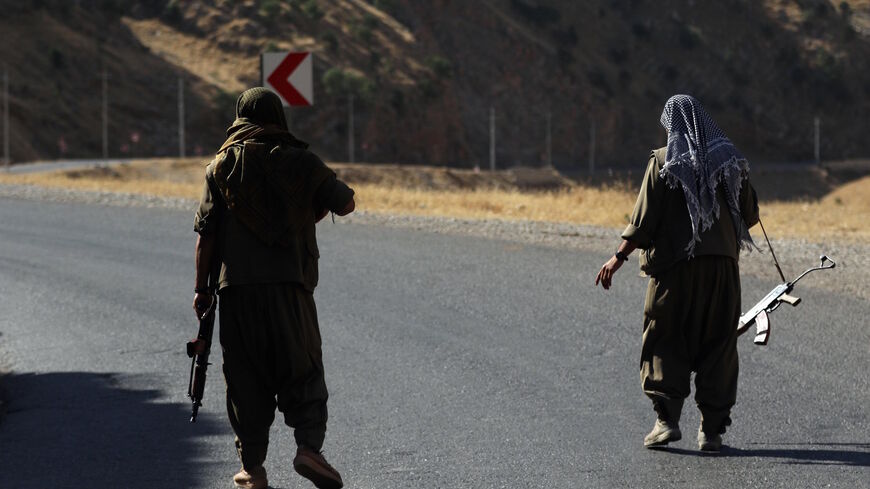 A member of the Kurdistan Workers' Party (PKK) carries an automatic rifle on a road in the Qandil Mountains, the PKK headquarters in northern Iraq, on June 22, 2018. - SAFIN HAMED/AFP via Getty Images

The Turkish military rained bombs on suspected hideouts of the outlawed Kurdistan Workers Party (PKK) in Iraqi Kurdistan early Tuesday, hitting ammunition depots, caves and other hideouts, Turkey’s National Defense Ministry announced in a statement. More than 20 aircraft took part in the sorties, which hit 28 separate targets in the Asos mountain range along the Iranian border. The attacks mark a further expansion of Turkey’s ongoing offensive against the rebels well beyond the areas bordering Turkey and moving 200 kilometers (124 miles) deep into Iraqi territory.

The mayor of Penjwin, a nearby district scarred by Iraq’s long war with Iran, said the strikes commenced at around 6:30 a.m. local time and continued for around 20 minutes. He told the local news outlet Rudaw that Turkish drones likely carried out the attacks. He said that not much damage had been inflicted but that local farmers had been scared.

Last week Turkey attacked a Yazidi militia known as the Sinjar Resistance Units (YBS) which has close ties to the PKK in the Yazidi-dominated Sinjar area bordering Syria. A senior YBS leader perished in the strike that was followed by another on a makeshift clinic where YBS militants were being treated. At least eight people, four of them civilians, died as a result of that attack.

Turkey has carried out previous operations in Sulaimaniyah province, where Asos is located, most recently in June. But most of its activity is focused along the mountainous areas bordering Turkey and the Bradost region where the Turkish, Iraqi and Iranian borders converge. Numerous civilians caught in the middle have died. The latest such victims were two Iraqi Arabs who strayed into the Batufa area of Zakho across from Turkey. The men identified as Ahmet Shakir Mahmoud, 40, and Yusuf Omar, 20, died when a drone hit the car they were traveling in.

Turkey has also been conducting a series of air operations against US-backed Syrian Kurdish fighters who Ankara insists are linked to the PKK, killing a noted woman commander along with three of her comrades in a drone strike on the town of Tal Tamar. Turkey has been using its increasingly sophisticated drone technology to pick off high-value targets. In May Turkey said it had killed the “PKK’s general officer responsible for Syria,” a veteran Syrian Kurdish commander who went by the code name Noureddine Sofi.

The Iraqi government and the Erbil-based Kurdistan Regional Government have repeatedly called on Turkey to cease its operations while calling on the PKK to stop using Iraqi territory to attack Turkey. Sporadic tut-tutting by Western governments has not deterred Ankara either.

At least 5,464 people have been killed in clashes with or attacks by the PKK since a two-and-a-half-year cease-fire between Turkey and the rebels collapsed in July 2015 along with talks to end the conflict. More than half — some 3,393 — were PKK militants, according to a running tally by the International Crisis Group.

The PKK leadership has vowed to carry on its 35-year-long fight, which was initially for Kurdish independence but has since been scaled back to political autonomy for Turkey’s estimated 16 million Kurds.

In a recent interview, top PKK commander Murat Karayilan pointed to the Taliban takeover of Afghanistan as an example of how lesser-equipped groups can defeat powerful armies with the latest technology. “As things currently stand,” he noted, “not only has the United States been defeated in Afghanistan, all of NATO has been defeated. In other words, modern technology has been defeated. Today the same situation is valid for the fight being waged in Kurdish lands. What matters is a people’s will, its beliefs and its spirit of enterprise,” Karayilan concluded.