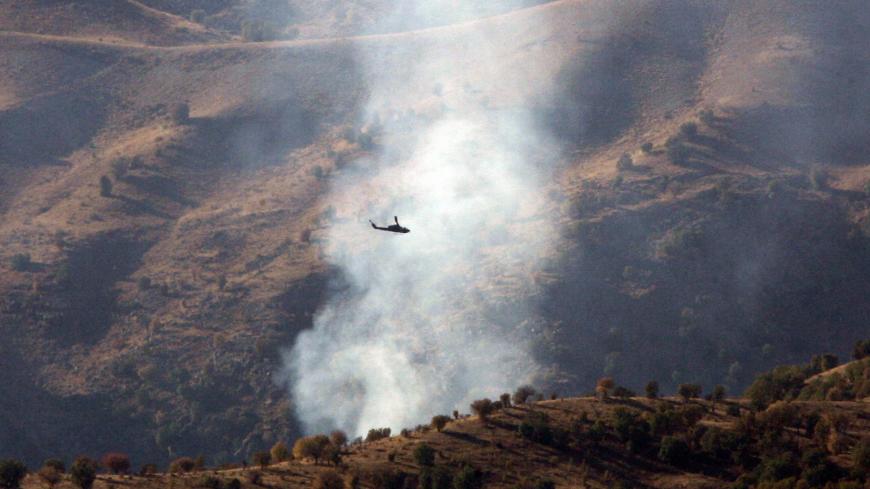 Turkish helicopters fly during an attack on a Kurdistan Workers Party camp Oct. 30, 2007 in the Cudi mountains, Sirnak province, near the Turkish-Iraqi border, southeastern Turkey. - MUSTAFA OZER/AFP via Getty Images

According to the Kurdish news outlet Rudaw, the strike in the Bradost area in northern Iraq targeted a meeting between border officials and fighters with the Kurdistan Workers Party (PKK), which Ankara considers a terrorist group. Bradost Mayor Ihsan Chelebi told the Associated Press that the officers killed Tuesday had been setting up new posts in the area.

Turkey has long targeted PKK strongholds in neighboring Iraq it says are used by the militants to launch cross-border attacks inside Turkey. Tuesday's strike appears to be the first to kill regular Iraqi forces since the start of Turkey’s latest military campaign in Iraq.

The Turkish military expanded its operations in June, launching a wave of airstrikes against Kurdish militants in the Yazidi homeland of Sinjar and the Qandil mountains. The Turkish defense minister said on Sunday that Turkey had “neutralized” 83 militants since June 16, a term indicating they were killed, captured or surrendered.

The PKK, which the United States and the European Union also label a terrorist organization, has waged a decades-long violent insurgency against the Turkish state that’s left more than 40,000 dead on both sides. Turkey widened operations against the group following the July 2019 assassination of a Turkish diplomat in Erbil that both Turkey and Iraqi Kurdish officials blamed on the PKK.

In October 2019, Turkey launched a military operation in northern Syria to drive away from its border the Kurdish-led Syrian Democratic Forces, elements of which Ankara considers terrorists linked to the PKK.