It is less common for Turkey to bomb the Kurdish armed group there. More of the Turkey-PKK conflict in Iraq takes place in Dahuk near the Turkish border. 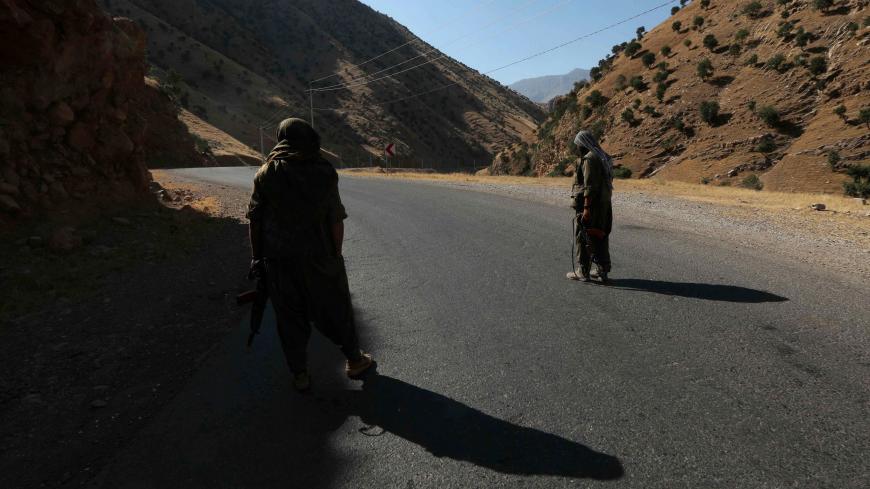 A member of the Kurdistan Workers Party (PKK) carries an automatic rifle on a road in the Qandil Mountains, the PKK headquarters in northern Iraq, on June 22, 2018. Turkey has been conducting airstrikes against the PKK in Iraq. - SAFIN HAMED/AFP via Getty Images

Turkey bombed multiple possible Kurdistan Workers Party (PKK) targets in Iraq this week. The airstrikes took place in the Kurdistan Region’s Sulaimaniyah province, which is a relatively less common location for Turkey-PKK conflict in the country.

Turkey launched airstrikes near the town of Mawat today. Nobody died, but farmland caught on fire as a result, the Kurdish news outlet in Iraq Rudaw reported. Turkey hit the same area Tuesday, Rudaw said. Turkey’s state-run Anadolu Agency reported today that Turkey conducted successful airstrikes against the PKK in the Asos region, which is close to Mawat. Turkish armed and intelligence forces detected their presence via surveillance, according to the outlet

Mawat is located about 30 miles (50 kilometers) north of the city of Sulaimaniyah in the autonomous Kurdistan Region. It is close to the Iranian border. Several Iranian Kurdish groups operate in the Kurdistan Region near the border, including the PKK’s Iranian affiliate.

Turkey frequently strikes apparent PKK positions in the Kurdistan Region and other parts of Iraq, but began an expanded air and ground offensive against the group in June.

Turkey’s airstrikes and other operations more often take place in Dahuk province of the Kurdistan Regional Government (KRG) near the Turkish border. They target mountainous areas populated by Kurds and Assyrian Christians where the PKK operates. The PKK also attacks Turkish forces there.

The Kurdistan Democratic Party (KDP) is the dominant political power in Dahuk, and its leaders have an oil-based relationship with Turkey. These ties allow Turkey greater rein to pursue the PKK in the region, though the KDP-led KRG did call on Turkey to stop its attacks following the start of the June operation.

Sulaimaniyah is controlled by the Patriotic Union of Kurdistan (PUK), which is historically closer to the PKK and Iran and does not have the same economic relationship with Ankara as the KDP does.

Turkey previously conducted airstrikes in Sulaimaniyah province this year. Turkey bombed the Asos area north of Sulaimaniyah targeting the PKK in May.

The PKK fights for greater political and cultural rights for Turkey’s Kurds. The Turkey-PKK conflict has left tens of thousands dead since 1978. Turkey and the United States consider the PKK a terrorist organization.