PKK attacks Turkish military base in Kurdistan Region of Iraq

The attack comes amid intra-Kurdish tensions in Iraq over the PKK's and Turkey's presence in the country. 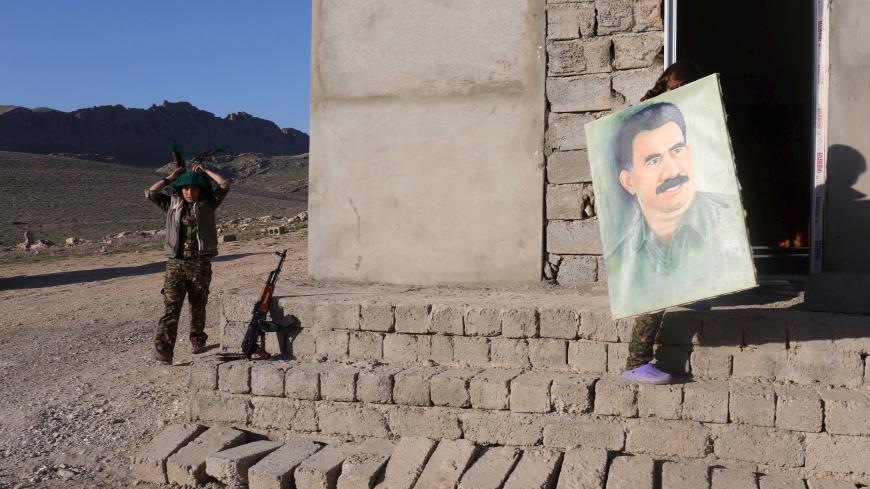 A female Kurdistan Workers Party (PKK) fighter adjusts her scarf while another carries a picture of jailed Kurdish militant leader Abdullah Ocalan at their base in Sinjar March 11, 2015. - REUTERS/Asmaa Waguih

The Kurdistan Workers Party (PKK) reportedly attacked a Turkish military base in the Kurdistan Region of Iraq today.

The PKK attacked the Turkish base in Kani Masi, a mixed Assyrian-Kurdish area in Dahuk province near the Turkish border. Clashes ensued for an hour and the area lost electricity due to the fighting, the Iraqi Kurdish outlet Rudaw reported, citing a local official.

Turkey had not released a statement on the incident by the time of publication, but said the day before that its airstrikes had "neutralized" four PKK members in the Khakurk and Metina areas in Dahuk.

The PKK has fought Turkey for greater Kurdish autonomy for decades. Turkey, as well as the United States, regards the PKK as a terrorist group.

The PKK has long based itself on the mountainous border area between the Kurdistan Region and Turkey. It also has a presence in Iraqi government-controlled areas such as Makhmour south of Erbil and the Yazidi city of Sinjar near the Syrian border. Turkey frequently bombs apparent PKK targets in these areas, especially in the mountains close to the border, believing them to be a security threat.

Turkey has several bases in the Kurdistan Region of Iraq in Erbil and Dahuk provinces. The Kurdistan Democratic Party (KDP) controls these areas and has an economic relationship with Turkey based on Kurdish oil exports and Turkish goods imports. The KDP-led Kurdistan Regional Government has criticized both Turkey’s military actions and the PKK’s actions in its territory.

The Patriotic Union of Kurdistan (PUK), a party that controls Sulaimaniyah province, has historically had better relations with the PKK. However, PUK officials closed PKK-affiliated political offices last year after pressure from Turkey.

There has been increased criticism of the Turkish military presence in KDP territory by Kurdish civilians and PKK affiliates recently.