The US State Department has condemned the Turkish president’s recent meeting with senior members of the Palestinian militant group Hamas as one that “only serves to isolate Turkey” on the world stage. 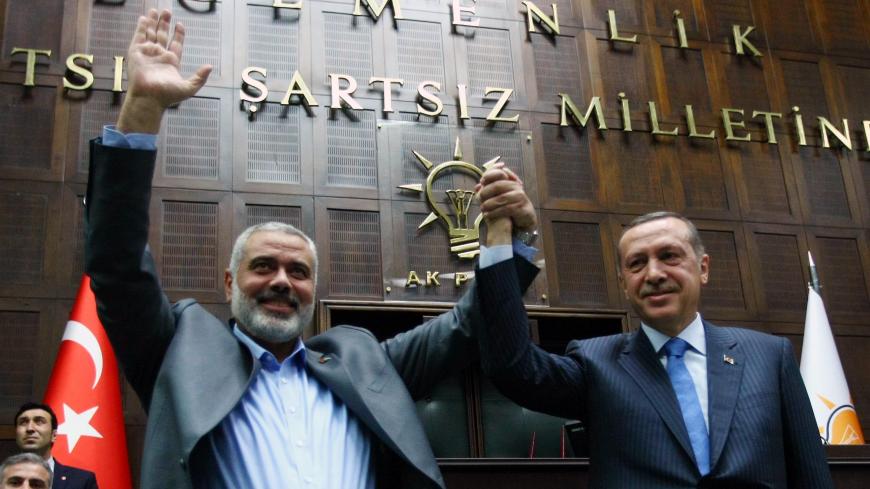 Hamas leader Ismail Haniyeh (L) and Turkish leader Recep Tayyip Erdogan salute the lawmakers of Erdogan's Justice and Development Party at the parliament in Ankara on Jan. 3, 2012. The United States is criticizing Erdogan for again meeting with Haniyeh on Aug. 22 along with Haniyeh deputy Salah al-Arouri — both listed as terrorists by the United States. - ADEM ALTAN/AFP via Getty Images)

The US State Department has condemned the Turkish president’s recent meeting with senior members of the Palestinian militant group Hamas as one that “only serves to isolate Turkey” on the world stage.

President Recep Tayyip Erdogan welcomed a Hamas delegation to Istanbul on Saturday for his second high-profile meeting since February with the group, which has ruled the Gaza Strip since 2007.

The delegation Saturday included Hamas political chief Ismail Haniyeh and his deputy Salah al-Arouri, both of whom are listed as specially designated terrorists by the US government. Arouri is wanted in connection with several terrorist attacks, hijackings and kidnappings, and the State Department has offered up to $5 million for information leading to his whereabouts.

The State Department’s rebuke of Turkey came a day after President Donald Trump lauded its president for releasing American minister Andrew Brunson in October 2018. During a video segment at the Republican National Convention featuring ex-hostages whose release he helped negotiate, Trump described Erdogan as having been “very good” to him.

Why it matters: The weekend’s high-level meeting was Erdogan’s latest outreach to Hamas, a group he views as a legitimate political force but is considered a terrorist organization by Israel, the United States and the European Union.

Erdogan’s governing Justice and Development Party shares an ideological linkage with Hamas and the Muslim Brotherhood, a pan-Arab movement banned in Egypt and the United Arab Emirates. Leaders from both Islamist groups praised the Turkish government’s recent conversion of the iconic Hagia Sophia into a mosque.

This month, The Telegraph reported that Ankara is granting citizenship to senior Hamas figures. The British newspaper also reported in December that Turkey was allowing Hamas to plan attacks against Israel from Turkish soil, including a foiled plot to assassinate of Jerusalem's mayor. Turkey denies the charges.

What’s next: The State Department is continuing to raise “concerns about the Turkish government’s relationship with Hamas at the highest levels” amid heightened cross-border tensions between Israel and the Gaza-based militants. Hamas has launched bomb-laden balloons across its frontier in recent weeks, setting fire to Israeli farmland and prompting Israel to strike Hamas-run military facilities in the coastal enclave.

Turkey’s support for the Palestinians comes amid strained relations with the Jewish state. Also this weekend, Erdogan spoke with Palestinian Authority President Mahmoud Abbas to voice his opposition to the recent US-brokered deal normalizing relations between Israel and Turkey’s regional rival, the United Arab Emirates.

Know more: State Department officials are also pressing Turkey to restore water supplies to Kurdish-run areas in northeast Syria, as Amberin Zaman reports. For more on the Israel-Hamas tensions at the border, check out the latest by Rina Bassist and Ben Caspit.