Israeli sources say that Jerusalem bears no connection to the alleged spy network Turkey said it had exposed last week. 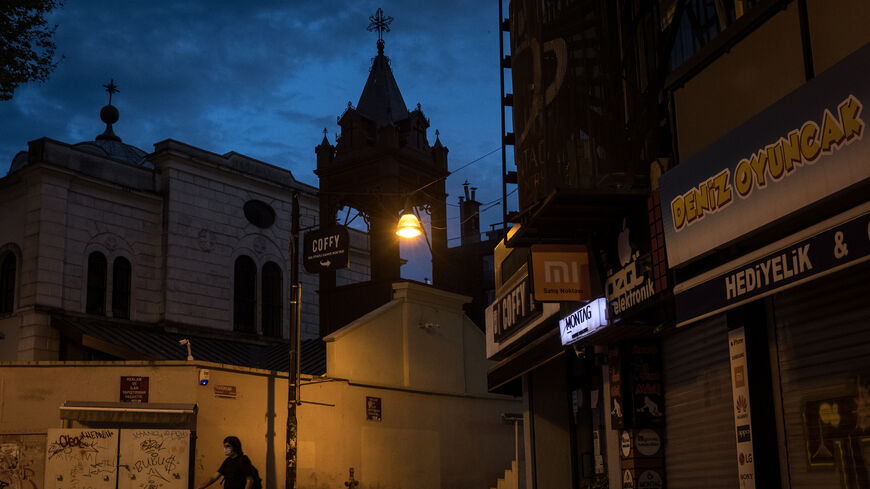 A man walks on an empty street in the Kadikoy district during a three-week nationwide coronavirus lockdown on May 7, 2021, in Istanbul, Turkey. - Chris McGrath/Getty Images

These are not easy times for Israel. It has been dealt a bad hand of cards on Iran, facing an endless standoff with Hamas in Gaza and continued Hezbollah and Iranian entrenchment on the Syrian Golan. Against the backdrop of the Oct. 22 summit between Prime Minister Naftali Bennett and Russian President Vladimir Putin in Sochi, Israel is facing a new development: Reports from Turkey say authorities there cracked a Mossad spy network and arrested 15 of its members.

No one in Israel seems overly bothered by the news, which many sources consider a domestic Palestinian affair. Official Israel is ignoring the reports, according to which the Turkish intelligence service tracked the Mossad ring, consisting of five three-member cells, for a year. On Oct. 7, security agents raided the homes of the 15 alleged agents and arrested them.

The reports coincide with the mysterious disappearance in recent weeks of seven Palestinians studying in Turkey, six men and a woman. “They could well have been detained by Turkish intelligence,” an Israeli intelligence source told Al-Monitor on condition of anonymity. “In any case, there is no significant Mossad network, and there was no such network, and this whole affair is not directly connected to us.”

A former senior Mossad official told Al-Monitor on condition of anonymity, “Israel is not spying on Turkey, the two countries are not at war and Turkey is not on our list of so-called essential information targets.”

Nonetheless, Turkey is positioned at an important geopolitical crossroads and is the scene of Hamas activity. Israel has often complained to Turkey about its hosting of top Hamas officials and their activities and does track important Hamas figures, the most senior being Salah al-Arouri, one of the founders of Hamas' military wing. The Mossad claims al-Arouri is in Turkey, from which he is trying to run Hamas terrorist networks in the West Bank. Al-Arouri has also been on the US most wanted list for several years.

“Our assessment is that this is in fact an effort by the Palestinian Authority to track senior Hamas figures endangering it from Istanbul,” a senior Israeli military source told Al-Monitor. According to the Palestinian news site Shehab, seven of the alleged Mossad agents were in fact working for PA intelligence. The seven could well be the same students reported missing in Turkey in September. A joint Turkish-Palestinian team was formed following the disappearance to locate them, while the PA tried to reassure their families.

It seems unlikely. The scandal, first reported with much fanfare by media outlets with ties to Turkish President Recep Tayyip Erdogan, has not much troubled Israel. According to Oct. 22 reports in Turkey, one of these detained is a Palestinian whose initials are M.A.S. and ran an office helping Palestinian students in Turkey. According to his testimony, as reported from Turkey, he was contacted in 2018 by a man identifying himself as a European Union official who sought information about Palestinian students in Turkey. The two started meeting in Switzerland and exchanging encrypted information.

Israel is in the market for intelligence about the activities of Palestinian students in Turkey, given that many of them eventually return to the West bank. During the heyday of the Islamic State organization, Turkey served as a launch pad and transit point to Syria and Iraq and Israel and many Western states closely monitored these movements. Salah al-Arouri would definitely be a person of interest for his efforts to stir up anti-PA and anti-Israel Hamas activity in the West Bank. The Mossad could well be trying to monitor his actions and there is no doubt it is interested in his movements.

“Nonsense, we do not have any such network there,” a former top Mossad official told Al-Monitor on condition of anonymity. “Even if there was such a network, it would have been of marginal importance. Turkey is not a prioritized intelligence target; it is not an enemy state. Israel might be trying to track Hamas activity on Turkish soil, and that is no secret, but the drama presented in the Istanbul and Ankara media is overblown.”

It could all be Palestinian activity orchestrated, as reported by Shehab, by Palestinian intelligence Chief Majed Faraj in coordination with Israel. The website reported that large amounts of money were found, allegedly given to the cell members by Palestinian intelligence to spy on students identified with Hamas. The PA views Hamas as an enemy striving to bring down Palestinian President Mahmoud Abbas and take over the West Bank, just as it did in Gaza some 15 years ago. If the affair is an internal Palestinian matter, and even if the Mossad was involved directly or indirectly, the case is hardly as dramatic as it is being presented.

Israeli interest in Turkey has grown in recent months, prompted by several attempts from Ankara to reach out to Jerusalem, capped by a lengthy conversation in July between Erdogan and new Israeli President Isaac Herzog. Erdogan initiated the call to congratulate Herzog on his election, after which Herzog, according to what several sources have told Al-Monitor pressured Bennett and Foreign Minister Yair Lapid to consider the Turkish proposal to thaw relations.

Herzog’s proposal was not met with much enthusiasm, especially in light of loud protestations on the part of Cyprus and Greece, with which Israel has been engaged in a strategic regional alliance after losing its Turkish ally. Rumors about Erdogan’s failing health and Turkey’s economic difficulties are actually improving prospects of a rapprochement between Ankara and Jerusalem, though the reports about the alleged Mossad network could have an adverse effect.