The Turkish media may be abuzz with reports about the foiling of a Mossad-run spy ring, but Israel appears unimpressed, and observers see no further deterioration in the already frosty bilateral relations. 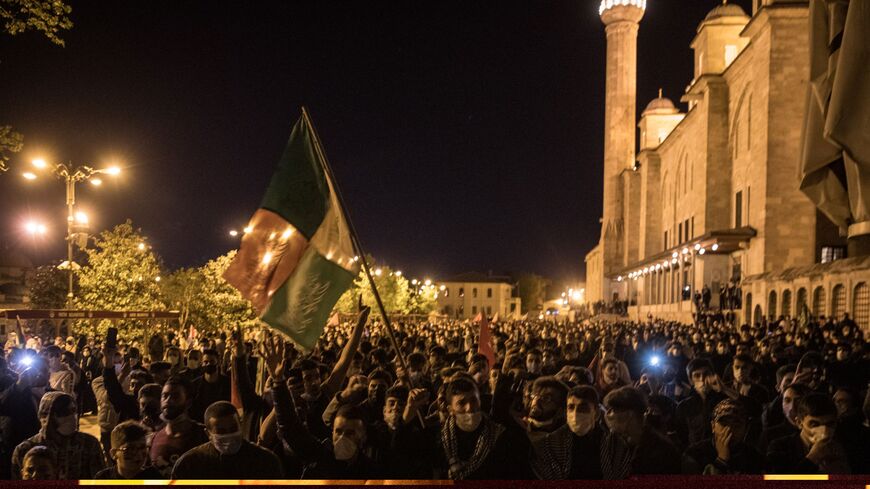 Protesters chant slogans and wave flags during a protest against Israel outside Fatih Mosque on May 10, 2021 in Istanbul, Turkey. - Chris McGrath/Getty Images

Amid an ongoing quest for normalization with Israel, Turkey last week dropped a bombshell about busting a Mossad spy ring, comprised of Arabs, including Palestinians, who allegedly spied on Palestinians in Turkey.

The National Intelligence Organization (MIT) monitored the suspects for a year before 15 people were detained in four Turkish provinces on Oct. 7, according to the government-controlled daily Sabah. The suspects were allegedly organized in three-member cells and met with their Mossad handlers in European cities such as Zagreb, Bucharest and Zurich as well as Nairobi, Kenya. The suspects allegedly used encrypted online applications such as Protonmail and SafeUM to pass information about Palestinians in Turkey, the activities of pro-Palestinian civic groups and the assistance the Turkish government offers to Palestinians. Mossad reportedly paid them sums of $1,000 to $10,000. All 15 suspects were imprisoned in Istanbul pending trial on charges of international espionage.

At first glance, the bust might appear as a trump card for Turkey to squeeze Israel. According to Abdullah Agar, a Turkish security analyst popular with pro-government media, the MIT operation “has shaken Mossad’s reputation” and Turkey should expect a counter-move.

Yet the revelations do not implicate any Mossad operatives and remain limited to Arabs, which leaves Israel room to deny involvement and wash its hands of the affair.

In the weeks leading up to the operation, reports had emerged about nine Palestinians, among them university students, going missing in Turkey. Some in the Palestinian community in Turkey suspected Mossad might have abducted them, but several of the missing were confirmed to be in the custody of the Turkish security forces.

At least two of those reported missing are among the suspects arrested in the counter-espionage operation. One, identified only as A.B., allegedly acted as a courier and received a $10,000 payment from Mossad. He had disappeared in Istanbul in June. The other is Muhammad al-Tamimi Salhab, a medical student in the central city of Konya, who went missing in early September.

A Palestinian source told Al-Monitor that the network might have been uncovered in the course of pursuing exiled Palestinian politician Muhammed Dahlan, whom Ankara accuses of covert activities on behalf of Abu Dhabi Crown Prince Mohamed bin Zayed, the de facto ruler of the United Arab Emirates, who has spearheaded rapprochement with Israel.

Turkey-born columnist Rafael Sadi, who writes for Turkish media from Israel, reports that the Israeli foreign ministry is not planning to make a statement on the matter, and recalls Mossad’s traditional attitude to neither confirm nor deny undercover operations.

If the suspects were really involved in an operation, Sadi writes, "they were probably people hired by Mossad and not direct elements of Mossad.” He argues that Hamas-linked individuals and activities would be the only target for Mossad in Turkey, and does not rule out the possibility of Dahlan being behind the network.

Recalling that Dahlan is an adversary of Hamas and has sought to replace Mahmoud Abbas as the leader of the Palestinian Liberation Organization, Sadi writes, “He has the financial means to organize such an operation. He might have curried favor with Israel with some solid intelligence and obtained some benefits. Would Israel do that? Why not, if it suits its books?”

In April 2019, Turkish media had reported the capture of two Arabs linked to Dahlan who allegedly spied on dissidents from the Gulf on behalf of the UAE.

The Israeli media, meanwhile, have kept evoking the claim that Hamas set up a secret headquarters in Turkey for cyberwarfare and counter-intelligence operations in 2018. According to The Times, the headquarters – directed by a senior Hamas member who reports directly to the Hamas leader in Gaza, Yahya Sinwar – has been tasked with obtaining “dual-use” equipment for making weapons, in addition to coordinating cyberattacks and counterintelligence operations against Hamas’ enemies.

How will the spy affair affect Turkey’s quest to normalize ties with Israel?

With Turkey not exposing any Mossad operatives and Israel putting on an air of indifference, the affair has not fueled fresh turmoil in bilateral ties thus far.

In the years when Turkey and Israel were friends, they would often laud the cooperation between the MIT and Mossad. And since they were left without ambassadors in each other’s capitals in 2018, intelligence officials have held the more important contacts between the two sides.

A number of factors have recently turned up pressure on Ankara to mend relations. President Recep Tayyip Erdogan has courted Israel in a bid to improve the energy competition in the Eastern Mediterranean, which has left Turkey largely isolated against arch rivals Greece and the Greek Cypriots.

Ankara has also courted the Jewish lobby in the United States to influence the Joe Biden administration, which has adopted a tougher attitude towards Ankara than its predecessor. During Erdogan’s trip to New York for the UN meetings in September, the Turkish American National Steering Committee (TASC), a group close to Ankara, signed a statement of cooperation with the Orthodox Jewish Chamber of Commerce, including points that denounced the Boycott, Divest and Sanctions movement against Israel and endorsed the Abraham Accords, which had so angered Erdogan that he had threatened to recall Turkey’s ambassador from the UAE. The TASC withdrew from the declaration several days later after the move backfired in Turkey’s domestic politics.

Biden, meanwhile, has shown little willingness to accommodate Erdogan in the key disputes in bilateral ties, weakening Ankara’s motivation for cooperation with Israel .

Karel Valensi, a columnist for Shalom, the newspaper of Turkey’s Jewish community, said she expected no further deterioration in Turkish-Israeli ties, noting that the spy affair had generated little discussion in Israel and was largely seen as an internal Palestinian matter. “Hamas is the main priority of Israeli intelligence in Turkey,” Valensi told Al-Monitor. “The presence of Hamas leaders in Turkey and the terrorist attacks they plan or organize represent one of the stumbling blocks to normalization between the two countries – that’s how Israel sees it,” she said.

But the two countries have a long way to go to restore trust in each other, according to Valensi. “Even though bilateral contacts have never ceased in the background and even if ambassadors are mutually reappointed down the road, restoring the old closeness and partnership will require time, effort and, most importantly, political will,” she said.

Back in the 1990s, Turkey saw its ties with Israel as a “strategic” partnership. A 1992 cooperation deal between the MIT and Mossad was followed by a free trade agreement and accords on military and defense industry cooperation in 1996. In May 2018, however, tensions flared as Israeli forces killed dozens of Palestinian protestors at the border with Gaza. Erdogan accused Israel of “genocide” and Ankara asked the Israeli ambassador to leave and recalled its envoy from Tel Aviv. Remarkably, the crisis has had little impact on bilateral trade.

The report about the Mossad-run spy network followed similar reports about the MIT busting spy rings linked to Russia and Iran, which may suggest a link to Turkey’s domestic politics. Indeed, the operations have raised the profile of MIT head Hakan Fidan, who is often touted as a possible successor to Erdogan. In the words of one news site, the operations have shown “what an efficient power the MIT has gained in the region” under Fidan.