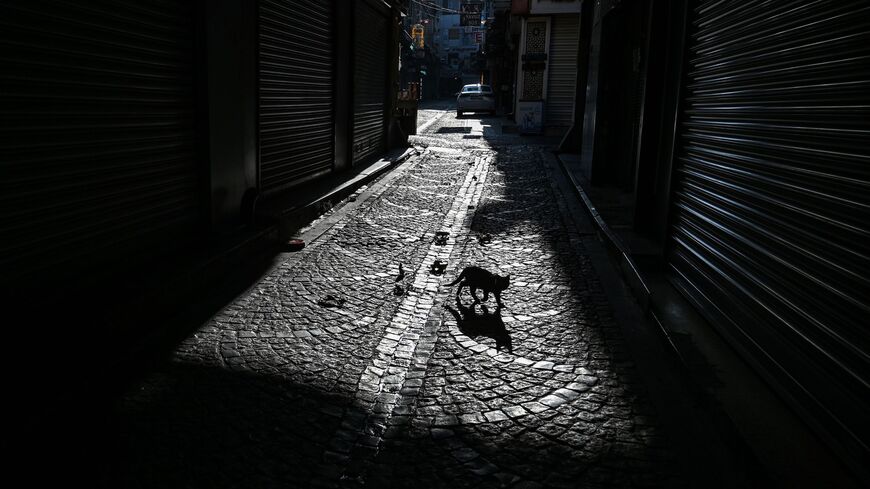 A cat walks in a deserted street with shops shut near Eminonu Square in Istanbul during a weekend curfew on Dec. 6, 2020. - OZAN KOSE/AFP via Getty Images

ISTANBUL — A plot to assassinate an Israeli diplomat in Istanbul and a prisoner exchange on a runway of Ankara’s Esenboga Airport marked another week in Turkey, a country of never-ending intrigue and spy plots.

While Turkey’s — and in particular Istanbul’s — reputation as a hub of espionage over the last 100 years mostly dates to its neutrality in World War II, when Allied and Axis agents rubbed shoulders in the restaurants and cafes of the city’s Beyoglu district, spy schemes are never far from today's headlines.

Last weekend the Israeli press reported that the Mossad, the country’s famed foreign intelligence service, had foiled an Iranian plan to kill a diplomat from the Israeli Consulate in Istanbul. A member of the Quds Force of Iran’s Islamic Revolutionary Guard Corps was said to have been arrested in an unspecified European country.

A few days earlier, images of an exchange of prisoners between the United States and Russia on an airport runway evoked Hollywood’s depiction of similar swaps during the Cold War.

In the footage from Russia’s state-owned Zvezda TV network, former US marine Trevor Reed, held in Russia since 2019 for allegedly assaulting a police officer, was seen being escorted to a waiting jet while convicted cocaine trafficker Alexei Yaroshenko passed the other way.

Although neither Washington nor Moscow confirmed the location, flight trackers monitored an aircraft operated by Russia’s Federal Security Service leaving Sochi on the Russian Black Sea coast for Esenboga and returning a short time later.

“As we welcome home Trevor Reed, we are grateful to Turkey for its role in making his safe return possible. We appreciate our Turkish partners’ assistance on this important matter,” US national security adviser Jake Sullivan later tweeted.

Cases of international plots, killings and sabotage often feature a Turkish aspect, such as the supposed poisoning of Russian oligarch Roman Abramovich during peace talks in March. After reportedly being targeted along with two Ukrainian negotiators, the billionaire was said to have been flown to Ankara for treatment.

The most high-profile act of international skulduggery on Turkish soil came in October 2018, when Saudi dissident journalist Jamal Khashoggi was murdered in the kingdom’s Istanbul consulate. The aftermath revealed not only the brutal nature of the crime by Saudi agents but also — through leaked recordings from inside the mission — Turkish intelligence’s eavesdropping on the consulate.

In the following years, the National Intelligence Organization, MIT, has emerged further from the shadows. In the last three months of 2021, it publicly revealed a number of spy rings purportedly working for foreign agencies including those of Russia, Israel and Iran. It has also played a major role in seizing suspected members of the group said to be behind a 2016 coup attempt from overseas, sometimes in legally questionable circumstances.

MIT is also active in the many foreign ventures Turkey has embarked on in recent years, including Syria, Libya and Nagorno-Karabakh.

In MIT’s 2021 report released last month, agency chief Hakan Fidan wrote, “The espionage activities targeting our country have been deciphered in the field of counter-intelligence, the workings of many countries toward other countries have been revealed and the networks of agents have been destroyed.”

“All these operations demonstrate MIT’s counter-espionage capacity,” he wrote for Politics Today Nov. 18, 2021. “The operations also prove that MIT’s young and qualified officers, along with their senior executives, contribute considerably to Turkish foreign policy.”

Istanbul, the setting of countless spy novels and films, is partly a victim of its geography, sitting across the Black Sea from Cold War adversaries and the largest city in a country that borders the Middle East, the Balkans and the Caucasus. Its cosmopolitan population includes a rich mix of political emigres, many of whom have become targets for their home countries’ intelligence agencies.

There have also been plenty of internal machinations, especially by the followers of US-based cleric Fethullah Gulen, who the Turkish authorities now dub the Fethullah Terror Organization, or FETO.

Prior to their falling out with the Justice and Development Party government, Gulenists seemed to have free range to use wiretaps and other espionage tools to smear their political enemies.

Meanwhile, the existence of shadowy connections between the state, the far right and the underworld, often for the purpose of targeting Kurdish and leftist figures, led to the coining of the term “deep state” following the Susurluk Affair in 1996.

Such networks are often seen as having roots in the Cold War, when NATO member Turkey was the alliance’s southern bulwark against the Soviet Union. Turkey was an important listening post to monitor Soviet communications and a base for spy planes tasked with high-altitude surveillance.

Kim Philby, one of the Soviet spy ring known as the Cambridge Five, was posted in Istanbul as an MI6 officer in 1947, when he is believed to have betrayed anti-Communist operations.