The Fatah-Hamas reconciliation talks in Istanbul have fueled debate on whether Turkey could increase its influence over the Palestinians, who are desperate for regional support amid normalization deals between Arab countries and Israel. 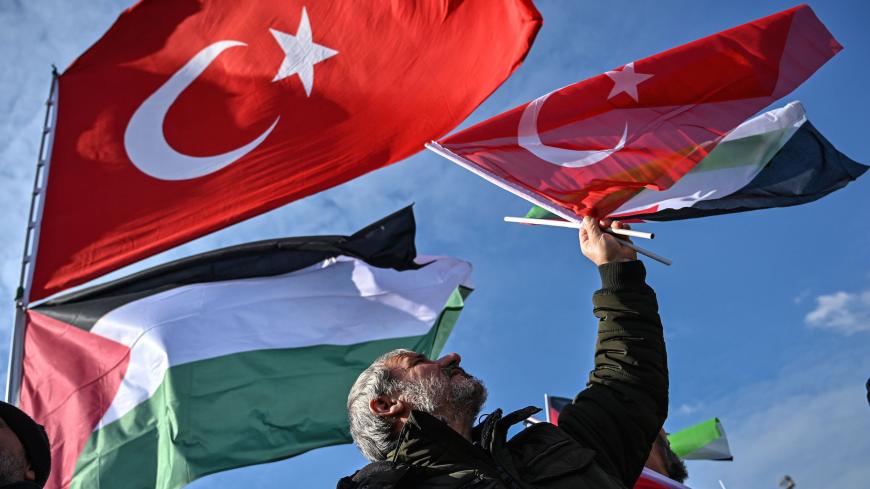 A demonstrator waves a Turkish flag and a Palestinian flag during a rally at Yenikap Square, in Istanbul, to protest against the US-made peace plan, also known as the "deal of the century," on Feb. 9, 2020. - OZAN KOSE/AFP via Getty Images

Egypt has been the traditional host of reconciliation talks between Fatah and Hamas, but the latest round of talks between the two rival Palestinian groups took place in Istanbul, highlighting a growing Turkish role in the Palestinian issue. A combination of factors — Turkey’s ambitions in the Middle East, the increased Hamas presence in Istanbul, and the dramatic shift in Israeli-Arab ties that deprives Fatah of financial props and deepens its despair — has raised Turkey’s profile, but how far its role could go is open to question.

The three-day talks in Istanbul ended with an announcement Sept. 24 that Fatah and Hamas had agreed to hold the first Palestinian elections in almost 15 years. The talks were preceded by an unprecedented meeting Sept. 3 between major Palestinian faction leaders in Ramallah and Beirut and a phone call between Palestinian President Mahmoud Abbas and Turkish President Recep Tayyip Erdogan.

The two delegations — led by Jibril Rajoub, secretary-general of Fatah’s Central Committee, and Saleh al-Arouri, deputy head of Hamas’ political bureau — agreed to hold legislative elections in East Jerusalem, the West Bank and the Gaza Strip within six months and then proceed with presidential polls and elections for the National Council of the Palestine Liberation Organization. Leaders of all Palestinian factions are expected to meet again under the auspices of Abbas in early October to finalize the details of reconciliation and elections.

Since Hamas’ bloody expulsion of Fatah from Gaza in 2007 that sealed the Palestinian division, the two sides have held many rounds of talks and inked about a dozen accords but have yet to achieve the goal of unity.

A Palestinian source who closely followed the Istanbul talks told Al-Monitor that Turkey played a facilitating role despite its pro-Hamas policies. “In general, Turkey favors Hamas to be the decisive group in Palestine, but as a result of factors such as the US Embassy’s move to Jerusalem and the United Arab Emirates’ and Bahrain’s normalization of ties with Israel, Fatah, too, has become more inclined to [deal with] Turkey,” the source said. “Turkey is utilizing this well. It has played a reconciliatory role in the talks, but I cannot say it is meddling in Palestinian affairs.”

Asked about how Egyptian and Turkish mediations are different, the source said, “The talks in Egypt would take place in the building of the intelligence service with the participation of [Egyptian] intelligence officials. Egypt always favored Fatah. Their Foreign Ministry was not involved. This is because Egypt views Palestine as a security issue rather than a political one. The talks in Turkey, on the other hand, were held at the Palestinian consulate in Istanbul. Turkey undoubtedly has a sway over the process, but Turkish officials did not attend the talks. Besides, Turkey does not have as much grasp on the details as Egypt has.”

The source noted that Egypt showed no negative reaction to the talks and appeared to have greenlit them. “Egypt can close the [Rafah] border crossing [with Gaza] if it so wishes, but we see it has just opened the crossing for several days,” the source said. “The Fatah team traveled on to Qatar from Istanbul and will then go to Cairo to brief the Egyptians. It is highly likely that Egypt had given them the green light. Fatah would have not gone ahead on their own.”

Speaking after a meeting with senior Hamas member Khaled Meshaal in Doha Sept. 26, Rajoub said Fatah had made a “strategic decision to achieve national reconciliation with Hamas based on political partnership.” Yet Hamas official Hussam Badran seemed to cast some doubt on the consensus as he said the same day that “statements circulating about confirmed agreements and schedules are incorrect.” The dialogue with Fatah, he added, “is not a substitute for a comprehensive national dialogue but rather a preparation for it.”

According to another Palestinian source, other factions were annoyed by the announcement of a roadmap being drawn up in Istanbul because it implies that the Palestinian political process is an issue between Fatah and Hamas only. “Ignoring the other factions is, in fact, something that Turkey, too, prefers because it is on good terms with both Fatah and Hamas,” the source told Al-Monitor. “Relations with Hamas represent the tough side of Turkey’s policy against Israel, while relations with Fatah represent its conciliatory side. Yet a national dialogue should comprise everyone,” he said.

Many Palestinian factions, particularly leftist ones such as the Popular Front for the Liberation of Palestine, are irked that Ankara’s Palestinian policy is predicated on Hamas and thus the Muslim Brotherhood. But with regional developments piling pressure on the Palestinians to unite, objections to Turkey’s auspices are being pushed to the backburner.

Palestinian despair has deepened over a series of US moves — the embassy’s transfer to Jerusalem, contribution cuts to UN bodies helping the Palestinians and the infamous “deal of the century” — and the ensuing Emirati and Bahraini recognition of Israel. On top of it all, speculation is abuzz about UAE designs, allegedly endorsed by Washington, to back Mohammed Dahlan — the controversial Palestinian leader who has been in the service of the Emirati crown prince since his expulsion from Fatah in 2011 — as the next Palestinian president.

Palestinian observers believe Dahlan stands little chance of being elected despite enjoying a degree of popular support, but the prospect of Dahlan staging a comeback as a result of Emirate-Saudi pressure and fait accomplis is not ruled out.

US and Israeli silence on the Istanbul talks is remarkable as well.

Washington had reacted harshly when Erdogan hosted Arouri and Ismail Haniyeh, the Hamas political bureau chief, in Istanbul Aug. 22. State Department spokeswoman Morgan Ortagus stressed that both Hamas leaders were “specially designated global terrorists” and warned that “President Erdogan’s continued outreach to this terrorist organization only serves to isolate Turkey from the international community.” Arouri, who was in charge of Hamas’ armed operations in the West Bank and has a $5 million US bounty on his head, is currently based in Lebanon after spending time in Qatar and Turkey since his release from an Israeli prison in 2010.

Israel, too, has frequently raised concern about Turkey harboring Hamas militants as Istanbul became a prominent base for Hamas abroad, along with Doha. Last month, Israel charged that Ankara had given passports to a dozen members of the group.

The silence of key actors on Turkey’s role in Palestinian reconciliation might not last long.

The feud between Turkey and the Saudi-Emirati-Egypt axis as well as the tensions between Gulf states and Iran have borne directly on the Palestinians, serving to break the Arab circle around Israel. The Palestinians are compelled to think out of the box to patch up support for their cause, but they can never ignore Egypt.

The West Bank and Gaza are both in financial dire straits. The Palestinian Authority, based in the West Bank, is unable to pay the full salaries of public servants, and the administration in Gaza relies on assistance from Qatar.

The “new Middle East order” might have pressed the Palestinians to look to Turkey and Qatar, but it hardly allows them to forge alliances as they wish.

Erdogan’s unbridled propensity to intervention and taking sides is another factor that precludes optimistic forecasts on whether Turkey could sustain and expand its role down the road. Moreover, Palestinian factions other than Hamas remain cautious about Turkey’s involvement. Fatah may value Qatar as a financial supporter, but the isolated Gulf emirate is not in a position to resist all sorts of pressure from the United States and US allies in the Gulf.

All in all, any expectation of a major expansion of Turkey’s mediation and Qatar’s financial role could be misplaced. The Syrian crisis and the rift in the Gulf have already shown Hamas how its attachment to one regional axis in regional influence wars could send it drifting from one capital to another. The Palestinians know that breaking their links with Egypt and the Gulf and leaning on Turkey and Qatar would not be without consequences.