Fatah and Hamas appear to have deals on a unified approach and elections, following Israel's normalization agreements with the United Arab Emirates and Bahrain. 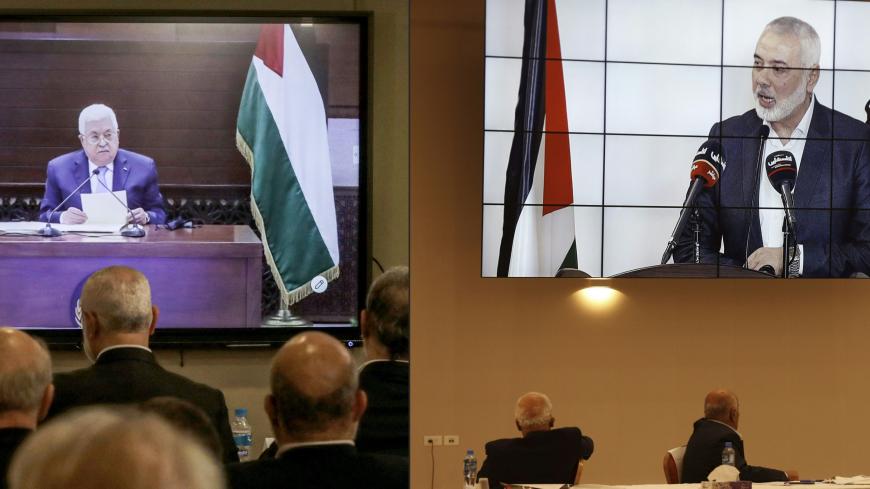 This combination of photos created and taken Sept. 3, 2020 shows (L to R) representatives of Palestinian factions gathered at the Palestinian Embassy in Beirut attending by videoconference talks with Palestinian President Mahmoud Abbas (screen), while their counterparts in the West Bank's Ramallah watch Hamas chief Ismail Haniyeh as he speaks in Beirut during the same meeting, in rare talks on how to respond to such accords and to a Middle East peace plan announced by Washington this year. - ANWAR AMRO,ALAA BADARNEH/POOL/AFP via Getty Images

The positive atmosphere engendered by the Fatah-Hamas agreement announced after their Sept. 24 meeting in the Palestinian Embassy in Istanbul is the product of a slow but serious behind-the-scenes effort. But the success ultimately was the result of the political environment and the personal chemistry between two Palestinians.

For years, negotiations and agreements between Hamas and Fatah have eventually proven to be futile, but this time there are many signs that we are indeed witnessing a genuine breakthrough.

Politically, not only are both sides exhausted and the pressure on them huge, but the Trump administration’s unilateral vision plus the Israeli efforts to bypass Palestinians with two Gulf states have jolted the most radical among Palestinians to take a deep look at what is happening. Palestinian leaders met in person and through electronic means Sept. 3 and vowed that the existential threats to the Palestinian national movement can no longer be ignored. It was also clear that the reconciliation train is finally on the right track.

The two-day meetings in Istanbul by representatives of the Fatah and Hamas movements signaled that both sides have agreed to try to resolve all internal issues between them through general elections.

In addition to the political circumstances, the apparent success of the process has a lot to do with the personal relationship between Jibril Rajoub, the secretary of the Fatah Central committee, and deputy Hamas chief Saleh al-Arouri. The two were both fellow prisoners and the level of trust between them appears to have provided the extra push that was needed. The current breakthrough actually began in May when Rajoub, in Ramallah, and Arouri, in Beirut, held a virtual press conference. Both have ambitions to succeed the leaders in their own faction. Hamas is holding new elections for its politburo and Arouri is among the leading contenders to head the movement along with current leader Ismael Haniyeh, former leader Khaled Meshaal, deputy head Mousa Abu Marzouk and the head of Hamas in Gaza, Yahya Sinwar.

The breakthrough in Turkey was confirmed with a press release issued Sept. 24 after a meeting held at the Palestinian Embassy in Istanbul. The release said the two delegations are united on a single vision and a mechanism with a timeline. “We agree that the vision has matured and we plan to move ahead with a broad national dialogue with the participation of all factions under the patronage of President [Mahmoud] Abbas to take place before Oct. 1.”

On this announced date, directors general of all Palestinian factions are to meet again under the auspices of  Abbas in Ramallah (and other locations virtually) to finalize all details of the reconciliation and to announce the dates of new elections by means of a presidential decree.

According to the statement from both sides, Palestine will witness three elections within the coming months. First, legislative elections will take place. The last legislative elections took place in 2006 and resulted in Hamas winning the majority of seats and setting up the short-lived Ismael Haniyeh government. The plan is that after the legislative elections are carried out in the West Bank, Gaza and East Jerusalem, a new national unity government will be formed. This would be followed by presidential elections. Abbas has repeatedly stated that he has no plans of ever running for office again.

Both legislative and presidential elections would involve the more than 5 million Palestinians living in occupied Palestine. But what about the rest of the Palestinian population, which is even greater? The newly elected legislative council would comprise part of the Palestine National Council (PNC). According to the statement given by Jibril Rajoub to Palestine TV, the presidential elections would be followed by elections for the PNC “wherever possible.” It could be that many Palestinians will be unable to vote. For example, elections involving Palestinians in Jordan would cause political problems since most of the 2 million Palestinian refugees living in Jordan are also Jordanian citizens. In the past all parties have generally agreed on a slate of Palestinian representatives from Jordan without having to have a vote that would create unneeded tensions. (Coincidentally, Jordan holds elections for its parliament Nov. 10.)

It is in locations and representations in places such as Jordan that Hamas and Fatah have in the past differed with Hamas leaders' demands for an across-the-board quota of 40% representation in determining the delegates to the PNC.

Talal Abu Afifeh, a resident of Jerusalem's Shuafat refugee camp and head of the Jerusalem Intellectuals Forum, told Al-Monitor the elections are the best means to reunite Palestinians and to reply to attempts to liquidate the PLO and the Palestinian national program. "Elections will give the Palestinian leadership the power to stand up to the US deal of the century and the normalization of Arab countries and at at the same time will allow for new faces and new leaders to take a front seat in national decision-making efforts."

Fawzi Barhoum, a Hamas spokesman in Gaza, said the Fatah-Hamas meetings in Istanbul confirmed the basis of a new initiative aimed at forging a Palestinian course “based on unity and power sharing.”

Jamal Zakout, a leader of the first intifada and a top aide to Salam Fayyad when Fayyad was Palestinian prime minister, told Al-Monitor that if the current agreement proves real, then it would mean that Fatah and Hamas must have agreed privately on some kind of quota for Hamas in the new PLO. “When you hear the words power sharing you need to understand that this means some kind of consensus as to who will get what and at what percentages in the new Palestine National Council." The council elected the PLO’s executive committee; both Abbas and before him Yasser Arafat were chairs of the committee.

Much still needs to be done to reach the coveted elections and the creation of a new set of legitimate Palestinian leadership. Suheir Ismael the head of the Bethlehem-based TAM women’s organization in told Al-Monitor that elections are necessary but they must be done freely and fairly. “The elections must take place without the intervention of the government or the security apparatuses whether in Gaza or the West bank.

Many more steps are needed to ensure that the current positive signals will translate to the aspired unity of Palestinians along with free and fair elections. Both the political atmosphere as well as the personal bond between two leaders of Hamas and Fatah will make or break the latest effort, which appears to be more serious than all previous efforts