Decree on election court removes one obstacle for Palestinian elections

Palestinian President Mahmoud Abbas issued a presidential decree to establish an election court, but many analysts say several obstacles that could derail the elections remain. 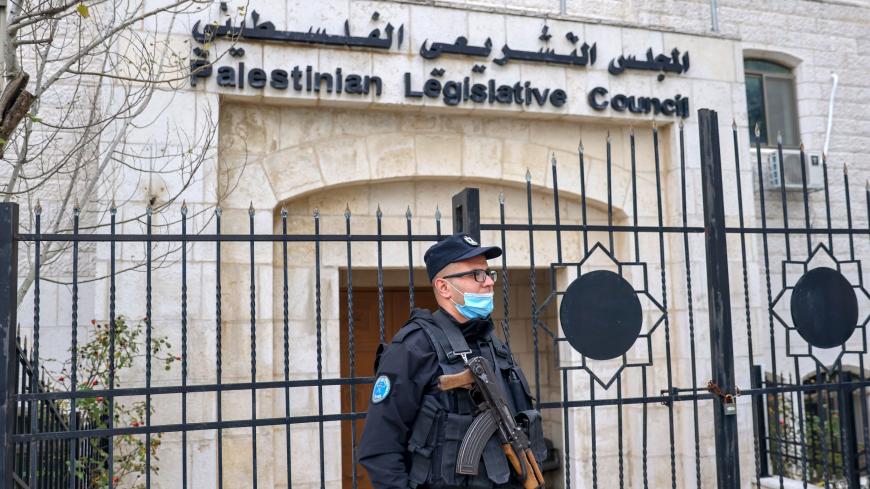 Members of the Palestinian security forces stand guard outside the Palestine Legislative Council building in the occupied-West Bank town of Ramallah, on Jan. 16, 2021. The day before, Palestinian President Mahmoud Abbas announced dates for the first Palestinian elections in more than 15 years, setting legislative polls for May 22 and a July 31 presidential vote. A lot of hurdles remain before the elections can be held, however. - AHMAD GHARABLI/AFP via Getty Images

The presidential decree issued by Palestinian President Mahmoud Abbas on March 1 has removed yet another obstacle standing in the way of legislative and presidential elections in the occupied Palestinian territories. Yet many other political land mines still exist.

Press reports from Egypt say the presidential decree was only issued after the secretary-general of Fatah's Central Committee, Jibril Rajoub, and the deputy head of Hamas' political bureau, Saleh Al-Arouri, met in Cairo on Feb. 28 and agreed on the list of nominated judges.

In accordance with previous agreements, the court should be composed of four judges from the West Bank, four from the Gaza Strip and one from East Jerusalem.

Despite progress on the elections’ court issue, a number of commitments remain to be formalized. Hani al-Masri, who participated in the Cairo talks and is the director of the Ramallah-based Masarat think tank, wrote on his organizations website that the following areas have not yet been addressed: “lowering the age of candidates, raising the percentage of women's participation [currently a minimum of 26%], regulating the issue of the resignations of public employees, lowering the fees for participating lists [now $20,000], solving the issue of which police force will guard election booths in Gaza and, finally, whether the presidential election is for president of the Palestinian Authority [PA] or the president of Palestine.”

The idea of a joint Fatah-Hamas list appears to be fading away and some analysts have said this might put Hamas’ offer not to challenge the Fatah candidate for president in jeopardy. Others insist that Hamas doesn’t have the stomach for challenging regional and international powers by running for the presidency.

The major reason for the failure of the joint list option has been internal problems within both Fatah and Hamas and strong opposition from the public to the idea of having its voice confiscated by such backroom deals.

Hamas is holding internal elections both inside and outside of Palestine. A reliable Palestinian source in Ramallah told Al-Monitor that there is an effort for an agreement on a two-headed process in which the former head of Hamas’ politburo, Khaled Meshaal, would become Hamas' leader outside of Palestine, while current leader Ismael Haniyeh could be reelected as head of the politburo and be based in Palestine.

For Fatah, the differences appear to be more intense. A senior Fatah source who preferred to remain anonymous told Al-Monitor that there are as many as five different groups somehow affiliated with Fatah that are competing to be either included in the main Fatah list or to run on an independent list. In addition to those supporting Marwan Barghouti such as Nasser al-Kidwa, there is a group close to former intelligence leader Tawfiq Tiwari, a third connected to former deputy head of the Palestine Legislative Council, Hassan Khreisheh, a fourth that includes those close to Palestinian businesspeople who derailed efforts to establish a social security program in Palestine and a fifth made up of supporters of the renegade Fatah leader, Mohammed Dahlan. Abbas has been adamant about the rejection of anyone affiliated with Fatah running outside the main Fatah list. At one point, threats were made that force might be used to prevent anyone from running outside the official list.

Opponents say that in the absence of a proper primary process, any attempt to create a representative list will not be truly reflective of the supporters of the main national Palestinian movement. The opponents suggest that if they run in parallel, this could be a genuine alternative to primaries.

Some are concerned that elections will be postponed if the internal issues, especially within the Fatah movement, are not adequately resolved. Issues involving elections for Jerusalemites could be one area that could be used to justify postponement.

Areej Daibas, coordinator of international affairs for Fatah in Jerusalem, told Al-Monitor that the problems in Jerusalem are compounded due to the lack of any position from the Israelis. “The record shows Israeli restrictions in past elections. And we expect that it will be more difficult this time around. Intimidation and false information might discourage Palestinians from participating.”

Daibas said there is no indication that Israel will even allow the use of post offices for the previously approved number of approximately 5,500 people from Jerusalem. Daibas said that in previous elections in which East Jerusalemites have participated, the Israelis have Intimidated voters by taking photos of them with the implicit threat that they could lose their residency in Jerusalem.

The Fatah official added that in meetings with Jerusalem-based diplomats, “We referred to signed agreements that allow Jerusalemites to vote and run for Palestinian elections. We reminded them of international law and human rights conventions and principles, particularly the right to self-determination, and asked them to bear their responsibilities accordingly.”

Some analysts have said that Israel will only make its position clear on the participation of Jerusalemites after the March 23 Knesset elections.