Palestinians pivot to Turkey, Qatar for support in wake of normalization deals

The various Palestinian factions, including Hamas and Fatah, are shoring up ties with Turkey and other countries in the region that stand against normalization with Israel. 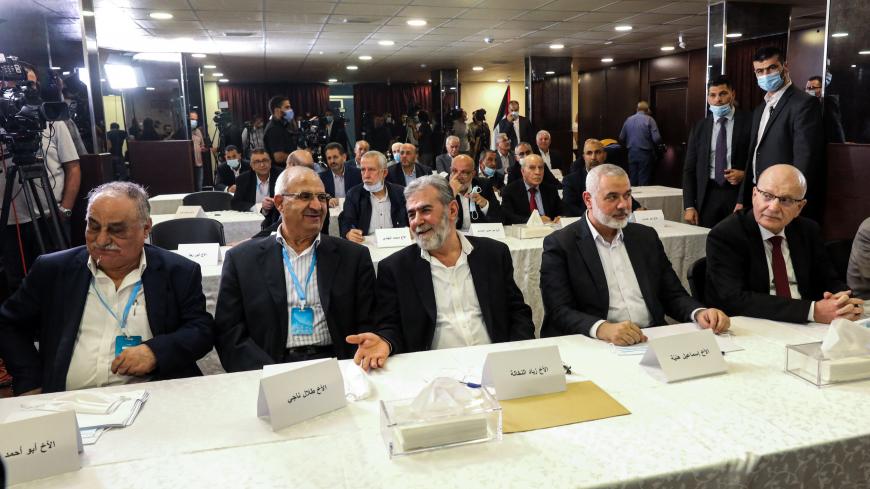 The normalization agreements between Israel, the United Arab Emirates and Bahrain signed on Sept. 15 in Washington have already made an impact on the Palestinians’ regional and Arab relations, reflected in the Palestinians’ repositioning with Beirut, Istanbul, Doha and Tehran and their distancing from Cairo and Riyadh.

On Sept. 21, Palestinian President Mahmoud Abbas phoned his Turkish counterpart Recep Tayyip Erdogan and thanked him for his support of the Palestinians. The two have shared several calls in the past few weeks, discussing political developments and US pressure on the region to normalize ties with Israel and ways to face such pressure.

Hamas leader Ismail Haniyeh met with Erdogan Aug. 22 in Istanbul and discussed the latest developments. Jibril Rajoub, secretary of Fatah’s Central Committee, arrived in Turkey on Sept. 21 to meet with Haniyeh and his deputy Saleh al-Arouri and discuss ways to end the internal Palestinian division.

Erdogan himself accused Israel of violating international law during his speech at the 75th United Nations General Assembly meeting on Sept. 22. He said, “The occupation of Palestine is a bleeding wound,” adding, “Israel is constantly increasing its audacity in the holy sites in Jerusalem.”

A senior Palestinian official told Al-Monitor on condition of anonymity, “It is no longer a secret that we are facing harsh conditions from the traditional Arab axis linked to the US, in exchange for their political cover and their financial support for us, the least of which is agreeing to normalization with Israel, and this is what we cannot do. This is why we have recently increased our contacts with influential players in the region such as Turkey and Qatar, even though they are affiliated with Hamas.”

Meanwhile, Qatari Emir Sheikh Tamim bin Hamad al-Thani called for compelling Israel to lift the blockade from Gaza in his own speech before the UN General Assembly.

On Sept. 18, Abbas’ special representative Nabil Shaath announced that Doha was ready to help the PA with its financial crisis, after Palestinian Minister of Civil Affairs Hussein al-Sheikh visited Qatar on Sept. 8.

In addition to the video meeting between Palestinian faction leaders in Beirut and Ramallah on Sept. 3, Abbas, Haniyeh and former Hamas leader Khaled Meshaal have spoken several times in the past few weeks. Previous contacts between them had been limited to a yearly basis at best.

While ties warmed between the Palestinians and Turkey and Qatar, their relationship with Saudi Arabia and Egypt seemed to deteriorate. Abbas has not held any talks with officials of those two countries since the announcement of the Israel-UAE agreement on Aug. 13, and no Palestinian official has visited them. The PA summoned its ambassador to the UAE, Issam Masalha, on Aug. 23 and its ambassador to Bahrain, Khaled Aref, on Sept. 19 in protest of the normalization agreement.

Bassem Naim, a former health minister in the Gaza government who now works in Hamas' international relations office, told Al-Monitor, “Hamas follows a consistent policy in its foreign relations. It has not and will not agree to be part of the axes of conflict in the region, and us reaching out to different countries reflects our keenness to seize any opportunity that appears to serve the Palestinian cause. The movement is well aware of the weight of the different countries and their role in helping the Palestinians. This is not about replacing Egypt with Turkey or Qatar, because we realize the importance of the Egyptian role in the region in general and the Palestinian file in particular.”

Haniyeh had warned in his speech at the Palestinian factions meeting held in Ramallah and Beirut on Sept. 3 that the US Mideast peace plan "aims to build a regional alliance that allows Israel to penetrate the Arab region.”

In a videoconference on Sept. 13, Mahmoud al-Zahar, a member of Hamas’ political bureau, called for the formation of an international coalition against the Israeli-US alliance. And in a Sept. 12 press statement, former Minister of Endowments in the Hamas government Ismail Radwan also called for establishing an Arab and Islamic alliance to confront the Zionist-US alliance in the region.

Iran has taken strict stances against Gulf normalization with Israel. Hamas’ representative in Tehran Khaled al-Qaddumi told Al-Monitor, “Hamas’ relationship with different countries depends on those countries’ [support] for the Palestinian cause, and the movement does not ally itself with one bloc at the expense of another. Rather, it mobilizes its friends and allies to play their role by supporting the Palestinian cause. Whichever country stands beside it as Iran and Turkey do, raises its political standing in the region, and whoever stands in the hostile ranks will be shamed.”

Qaddumi added, “Hamas believes that normalization with Israel will perpetuate its occupation of Palestine. The UAE and Bahrain’s talk about privileges they obtained from normalization is meaningless, including economic returns, as the trade balance between the UAE and Iran amounts to $13 billion, compared to a few billion with Israel.”

On Sept. 22, Hamas’ foreign relations chief Mousa Abu Marzouk noted in a statement to Al Jazeera that the movement's ties with Iran have been normal for a long time, since before the current crises in the region, and the relationship is similar to those with any other country that supports Palestinian rights. Abu Marzouk had previously said on Sept. 7, “Turkey has very strong relations with Abbas, Fatah and Hamas, and it now has something to offer in the reconciliation file.”

Wissam Afifa, director of Al-Aqsa TV in Gaza, told Al-Monitor, “The PA is embarking on a new political action to contain this series of normalization moves, especially after losing the shoulder that it had been relying on politically and financially, because it is clear that it has been abandoned and is even being pressured, especially by Egypt and Saudi Arabia.”

Afifa added, “Some PA leaders could see this as Cairo and Riyadh burning the boats. In this case, the PA is taking a major risk by stopping contacts with the Egyptians and increasing them with Turkey and Qatar, and it may have to pay the price for this action later.”

Despite the Palestinian anger over the recent normalization steps, Hamas may turn out to be the winner as its allies did not budge on their positions against Israel, especially Iran, Qatar and Turkey. Meanwhile, the PA has lost its traditional alliances and Abbas is left alone and isolated.